Investors have been burned by another hyped-up consumer product. Here's how to make sure it never happens again.

Shares of GoPro (NASDAQ: GPRO), a company that essentially created the action camera market, have been wrecked over the past six months. After hitting a 52-week high of around $65 per share in August of last year, the stock has lost nearly 80% of its value, trading for around $12 per share in recent days. That's 50% below the IPO price, and an astonishing 86% below GoPro's all-time high of over $90 per share. 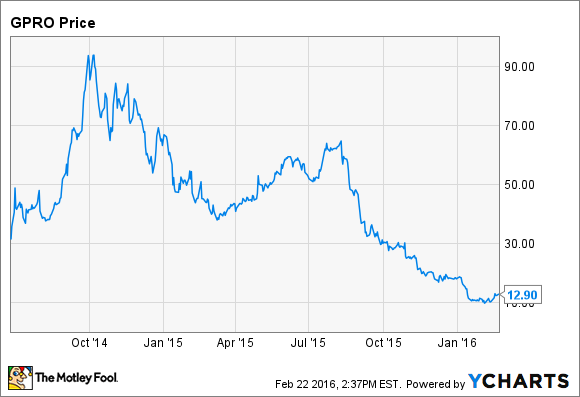 GoPro's growth has not only ground to a halt; it has reversed, with the company reporting a steep decline in revenue during the fourth quarter, along with a sizable net loss. At its peak, GoPro was valued at over $11 billion -- nearly seven times the company's sales in 2015 and 86 times peak earnings from 2014. The extreme optimism baked into the stock price at that time turned out to be unwarranted, and investors who bought near the peak have suffered massive losses as a result.

While it's little consolation for those who have seen their GoPro position crater, there are a few important lessons that can be extracted from the GoPro stock disaster.

1. Brand only gets you so far
There's no question that GoPro has done an excellent job building up its brand. GoPro's YouTube channel has over 3.7 million subscribers, and YouTube itself named GoPro its top brand in 2014 and its No. 2 brand in 2015, with the company beating out much larger companies. The sixth annual Shorty Awards, held in 2014 to honor people and organizations producing content on social media, named GoPro as the best brand on both Facebook and Instagram, and the seventh annual awards named the company the best brand on YouTube. GoPro's use of social media to build buzz about its brand has been truly unrivaled.

Thanks to this strategy, everyone seems to be aware of the GoPro brand, particularly younger people. But brand awareness is only part of the equation. I'm very aware of the GoPro brand, but I can say quite confidently that I'll buy one of their cameras. I simply have no use for one, and no amount of advertising -- whether traditional or on social media -- is going to change that.

Brand awareness doesn't guarantee brand loyalty, and without customers coming back to buy new cameras, all of the YouTube views in the world won't protect GoPro from the competition. Beyond a well-known brand, GoPro has no discernible competitive advantage. Its cameras are expensive, and rival devices selling for lower prices offer similar functionality. In other words, there's nothing special about GoPro's cameras.

The lesson here is that a strong, well-known brand is not enough to ensure that a company succeeds in the long run. Having a strong brand is a big plus, but without a durable competitive advantage, sustaining high levels of both growth and profitability isn't possible.

2. If it looks like a niche product, it probably is
Action cameras are unlikely to go truly mainstream. The vast majority of consumers simply have no reason to buy one, especially considering that smartphone cameras are good enough for most people. GoPro's revenue tumbled 31% year over year during the fourth quarter, suggesting the action-camera market may have hit a brick wall.

Back when GoPro's valuation was in the stratosphere, investors buying at peak prices had to assume that the market for action cameras could continue to grow rapidly for many years. It did for a while: GoPro had a very successful holiday season in 2014. But the ceiling ended up being far lower than optimistic investors assumed.

This kind of overestimation happens often with certain types of hyped-up consumer products. A good example is SodaStream, which sells home carbonation systems. I wrote about SodaStream after its stock collapsed in 2014, and one of the key takeaways was that investors vastly overestimated the potential market for the company. The exact same thing has now happened with GoPro. Investors ignored the lack of a competitive advantage, the onslaught of inexpensive competition, and the fact that most people have absolutely no use for an action camera. The result was an investing catastrophe.

3. Entering new markets is hard
Another assumption investors buying GoPro at peak prices had to make in order to justify buying the stock was that the company would enter new markets beyond action cameras, achieving success by leveraging its powerful brand. This is another area where investors are routinely overly optimistic. Even successful companies with massively popular brands often fail miserably when trying to enter new markets. A great example is Amazon, which is better than most when it comes to entering new markets. The company's expensive foray into the smartphone market with the Fire Phone was an unmitigated disaster, despite the fact that consumers generally love Amazon's brand.

For GoPro, the big new growth market was, and still is, drones. GoPro was reportedly working on a consumer drone back in 2014, and its Karma drone is set to launch sometime this year. But the consumer drone market has a lot of the same characteristics as the action camera market. It's unclear exactly how big it will be. The vast majority of consumers probably don't want or need a drone -- especially not an expensive one -- and competition is fierce. GoPro was a first mover in the action-camera market, giving it a temporary advantage, but it has no such advantage in the drone market.

There is absolutely no guarantee that GoPro's drones will be successful or that the consumer drone market will grow as quickly as many assume it will. Will the consumer drone market reach $4.6 billion by 2025, per ABI Research's forecast? Maybe. It may also be a quarter of that size and generate little revenue for GoPro. Assuming GoPro will be wildly successful is a big mistake.

None of this is to say GoPro can't make a comeback, stabilizing its business and returning to growth. But it's clear that the wild optimism that pushed up GoPro's valuation to nosebleed levels was misplaced. The action-camera market turned out to be a lot smaller than the best-case scenario assumed, and GoPro's brand couldn't prevent a steep decline in sales during the holidays.

Optimism, when allowed to run rampant and untethered to reality, can be a dangerous thing for investors.