While revenue declined during the fourth quarter, the office-supply retailer performed better than expected.

Shares of Office Depot ( ODP -2.89% ) soared on Wednesday following the company's fourth-quarter report. Both revenue and earnings came in above analyst expectations, driving the stock 13.5% higher by 11:45 a.m. EST.

Office Depot reported fourth-quarter revenue of $2.73 billion, down 1.5% year over year, but $20 million higher than the average analyst estimate. The North American retail segment suffered a 4% decline in same-store sales, while an extra week compared to the fourth quarter of 2015 led to a smaller decline in revenue and operating profit. 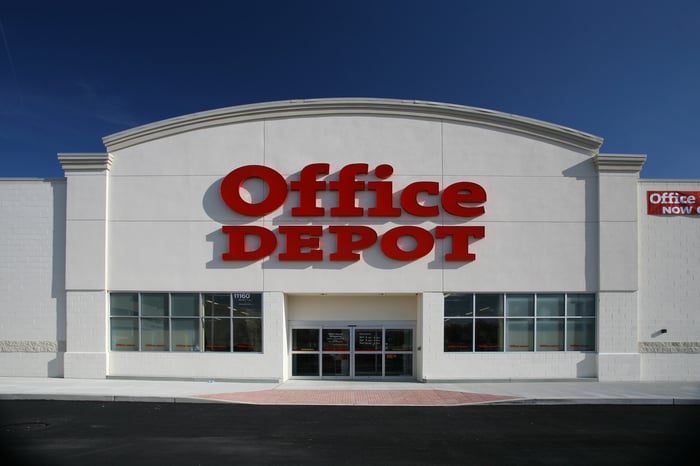 The business solutions segment suffered a 5% sales decline, excluding the extra week and adjusted for currency. Operating income surged despite the top-line weakness, even excluding the benefit from the extra week. Office Depot pointed to lower expenses and the timing of customer-acquisition costs as reasons for the increase in profitability.

Non-GAAP earnings per share (EPS) came in at $0.11, up from $0.06 in the prior-year period and $0.01 better than analysts were expecting. GAAP gross margin rose by 30 basis points year over year, while operating expenses declined, driving earnings higher.

Better-than-expected sales and earnings from Office Depot overshadowed the company's mixed guidance. Office Depot expects lower sales in 2017 due to store closures, contract customer losses, one less selling week, and difficult market conditions. Office Depot didn't provide EPS guidance, but it did guide for $500 million in adjusted operating income for the full year, up 10% excluding the benefit of the extra week in 2016.

The company made significant progress against its 2016 critical priorities and achieved substantial integration synergies, thanks to the hard work, commitment and dedication of the management team and associates. I believe we can continue this momentum in 2017, as we focus on stabilizing the top line, implementing our cost saving programs and executing on the key initiatives of the three-year strategic plan.

With the stock surging on Wednesday, investors seem to agree.