Did Advance Auto Parts Inc. (NYSE:AAP) just have a good or bad quarter? The 3.1% increase in comparable-store sales, after four straight quarters of declines, certainly suggests the company is starting to generate traction with its turnaround plans. On the other hand, the sales figures were flattened by a couple of non-recurring factors, and the adjusted operating margin decline to 6% from 7.7% in the same period last year says management still has a lot of work to do. Let's take a closer look at the earnings.

Sales up, margin down

For those unfamiliar with the investment case for Advance Auto Parts, we can start by observing that the company has an opportunity to play catch-up with the kind of operating margin, cash flow generation, and sales growth that peers such as O'Reilly Automotive Inc. (NASDAQ:ORLY) and AutoZone Inc. (NYSE:AZO) enjoy. Advance Auto Parts' management has set some aggressive mid-term targets, such as a 14.4% increase in adjusted operating income margin by 2021, from the 9.4% achieved in 2016, with $500 million in productivity savings achieved in those five years. 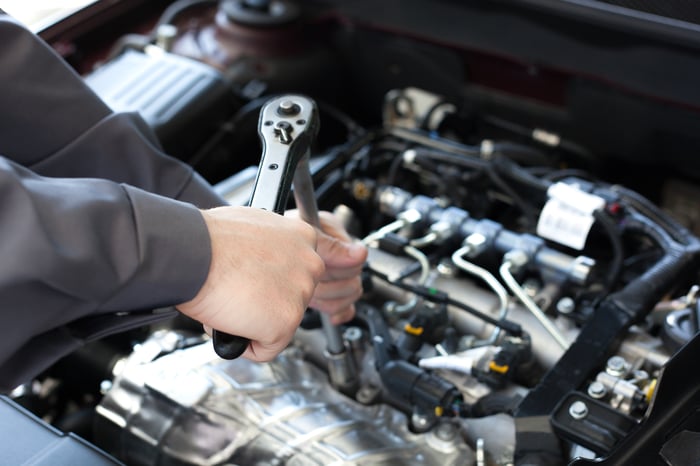 The problem is that the company continues to experience difficulties with integrating Carquest, as it seeks to follow in the footsteps of O'Reilly Automotive by becoming a leading dual store, incorporating both do-it-yourself and do-it-for-me solutions.

The latest results were mixed with comparable-store sales that turned positive after four straight quarters of declines. Moreover, the 3.1% increase was above the 0%-2% range forecast for 2017. However, operating income and margin continue to fall.

As Marvin Gaye once asked, what's going on?

On balance, Advance Auto Parts had decent quarter of sales growth. As discussed, the 3.1% increase is impressive enough -- and the initial market reaction to the results was to send the stock up a few percentage points. However, there were a couple of favorable issues in the quarter.

First, New Year's Day fell in the fourth quarter of 2015, but it will fall in the first quarter of 2017. That means the fourth quarter of 2016 had a normal day of sales compared with the same period in 2015, which had New Year's Day in it. The issue came up on the earnings call, with Evercore analyst Greg Merich positing that it was worth 100 basis points of revenue growth. In response, CEO Tom Greco wouldn't specify but said the positive impact was "not insignificant."

Second, cold weather in December created "exceptional winter-related demand in December," according to Greco, as harsh weather tends to lead to an increased need for car-part replacements.

As a consequence, Greco suggested, "Net, it will be important to look at our business across Q4 and Q1 combined to get a true picture of our sales growth improvement." That's a particularly pertinent point, because the first quarter will contain New Year's Day and no one knows if an early spring will occur and reduce demand for auto parts.

That said, a look at comparable-store sales growth compared with O'Reilly Automotive -- which wasn't affected by a New Year's Day shift but also saw strong weather-related sales in December -- shows that Advance Auto Parts finally had a sales quarter comparable with its closest peer. Even if you take off 100 basis points for the New Year's Day shift, Advance's adjusted 2.1% would be decent compared with O'Reilly's 4.8%.

Greco outlined three reasons for the margin decline, each of which was responsible for around a third of the decline.

First, "planned and proactive steps" to reduce inventory levels hurt operating profits. Investors can't complain too much, because inventory reduction measures were flagged up earlier, and as the following middle chart shows, Advance Auto Parts held much more inventory relative to its sales compared with O'Reilly Automotive and AutoZone. 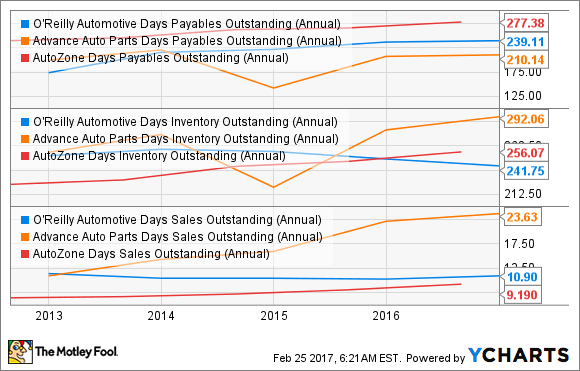 Second, management made "incremental investments to better serve" its customers. You can think of these measures as a necessary part of the turnaround plan.

Third, and more worryingly, CFO Tom Okray referred to "performance shortfalls in a few concentrated cost lines," with Greco describing them as "completely unacceptable." While Okray has a plan to fix the issues and claimed they won't be a part of the company's cost structure in the future, the shortfalls are still a sign of how difficult the Carquest integration is proving to be.

On balance, it was a positive quarter for Advance Auto Parts, but now the company needs to deliver a couple of quarters of solid sales growth -- comparable to its peers -- without any significant hits to margin from integration difficulties. Advance Auto Parts is on the right path, but it still has a long road ahead.