With continued weakness in Brazil and the integration of SABMiller well underway, the brewing giant looks forward to better days ahead.

Anheuser-Busch InBev (BUD -1.14%) released fourth-quarter 2016 results Wednesday evening, highlighted by significant synergies related to the completion of last quarter's combination with SABMiller, as well as a return to modest year-over-year revenue growth, thanks to the company's "premiumization" and revenue management initiatives. Nonetheless, AB-InBev shares are down around 3.6% in Thursday afternoon trading as of this writing. Let's take a closer look at what the brewing giant accomplished as 2016 came to a close, and what investors can expect going forward. 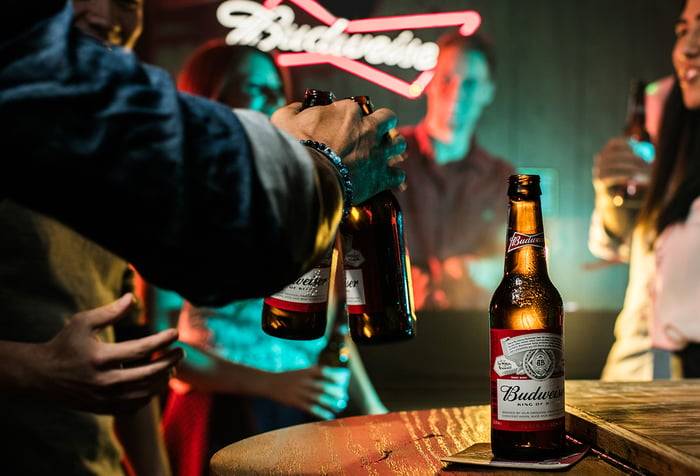 *Reference base, which includes the results of SABMiller as if the combination had taken place at the beginning of Q4 2015.
**As reported.
DATA SOURCE: Anheuser-Busch InBev.

Regarding the prospects the SABMiller integration, which is "well underway," AB-InBev management reiterated:

We expect the combination to generate significant growth opportunities, benefiting our stakeholders. We now have operations in virtually every major beer market. We have strengthened our position in developing regions, with excellent growth prospects in Asia, Central and South America, and Africa, which will play a key role in our company going forward. Our joint portfolio of more than 500 beers includes seven of the top 10 global beer brands and 18 brands that generate more than $1 billion in retail sales. By marketing our brands through a largely complementary distribution network, we will provide more choices for more consumers around the world.

While Brazil had a tough year, our global story had a number of silver linings. We saw strong performances in other key markets, including double-digit top-line growth in Mexico, as well as gains in overall preference for our brands. In Europe, our top-line grew 4.5% over FY15, driven by the evolution of our premium brands. Meanwhile, the U.S. continued to gain traction and FY16 saw EBITDA growth of 2.2%. Despite a decline in Chinese beer industry volumes, we continued to make gains in market share and profitability.

For the full year of 2017 -- and despite increased volatility in some key markets -- AB-InBev expects to accelerate overall revenue growth with the help of continued strength in its global brands and commercial revenue management initiatives. The company also increased its guidance for synergies and cost savings related to the SABMiller combination, to $2.8 billion (up from $2.45 billion previously). As it stands, the company has already captured just over $800 million of that total, and expects to realize the remaining $2.0 billion over the next three to four years.

All things considered, there were no big surprises this quarter from AB-InBev, even as the company continues to navigate the inherent challenges -- and realize the benefits -- of its massive global scale.