Earlier this week, President Donald Trump addressed the National Governors Association, sketching out his plans to scuttle the sequester, increase defense spending 10%, and add $54 billion to the defense budget.

Then he doubled down on that promise in an address made to a joint session of Congress on Tuesday.

Then Citigroup responded to all of this talk of growing the defense budget by...downgrading the stocks of General Dynamics (NYSE:GD), Northrop Grumman (NYSE:NOC), and Huntington Ingalls (NYSE:HII), too.

What the heck is going on? Here are three things you need to know. 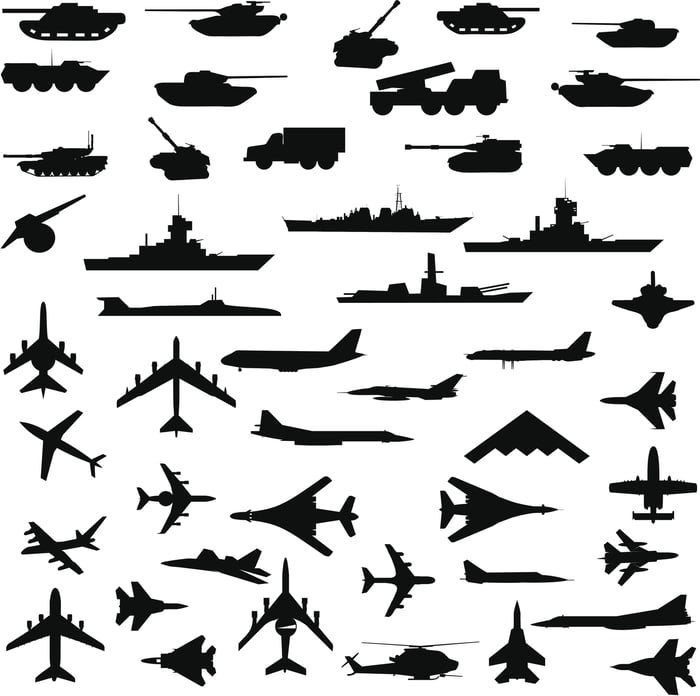 Defense stocks come in all shapes and sizes -- and Citigroup just downgraded them all. Image source: Getty Images.

1. Big expectations -- all already baked in

There's little doubt that Trump wants to increase defense spending, and by a lot. (He also had some kind words to say about Lockheed Martin's (NYSE:LMT) F-35 stealth fighter jet, a first for this president, and perhaps the reason Lockheed Martin didn't get the pointy end of Citi's stick yesterday.)

But just about everybody else, who's anybody in defense, did. Let's begin with General Dynamics.

As reported on StreetInsider.com, yesterday Citi downgraded General Dynamics stock from buy to neutral. This is a significant move by the banker, which has consistently urged investors to buy the stock since upgrading it to that rating back in January 2011. Those who took Citi's advice back then have enjoyed a 150% profit on General Dynamics stock along the way. But according to Citi, it's now time to cash in those chips.

Although Citi called General Dynamics' decision to offer earnings guidance through 2020 in its last earnings report a "welcome" development, the analyst worries that at a share price more than 19 times earnings (General Dynamics stock actually costs 20 times earnings today), all of the good news this company can possibly report is already baked into the stock price. There's simply not much more upside left in the stock, and Citi thinks you should sell it.

2. Second verse, same as the first

Huntington's stock is "trading at record highs," but Citi worries that investors are taking for granted "a lot of good news we can't necessarily count on." While Huntington's business would certainly benefit from Trump's call for "a bigger Navy," Citi says this catalyst is worth only $60 to $70 a share -- and Huntington's stock has already gone up by $70 since the election.

Huntington, notes Citi, has been the banker's biggest winner in the defense space since Citi turned bullish on defense back six years ago, "up 468% since we initiated coverage with a Buy on March 31 2011." At this point though, hoping for more than a six-bagger is just being greedy.

Although Citi isn't going so far as to say it's time to sell Huntington Ingalls stock, that seems to be the way it's leaning now.

Finally, we come to Northrop Grumman -- the company that spun off Huntington Ingalls six years ago, and that has been kicking itself for the mistake ever since.

Northrop stock has actually done pretty well for Citi (just not as well as Huntington), rising more than 340% over the past seven years. That fact alone makes today sound like a fine time to take some profits. But Citi also sees a risk to Northrop Grumman's profit margins as it "ramps up" development of the Air Force's new B-21 stealth bomber. Northrop won this contract last year, beating out rivals Lockheed Martin and Boeing (NYSE:BA) for the honor -- partly based on the price it offered.

Thus, while the $90 billion (my estimate -- the Pentagon is guesstimating the plane will cost less than $80 billion) Northrop should book from B-21 will be nice, the profits it earns on that revenues could be subpar. With an easy three-bagger in the bag, Citi sees no reason to take the risk that Northrop will take a hit on profits going forward.

Tic-tac-toe, that makes three downgrades to neutral in a row.

Suffice it to say that I agree with Citigroup's analysis, and its decision to downgrade all three of the stocks named above. What's more, I'd go a step further, and downgrade Lockheed Martin and Boeing as well.

To find out why, read last month's column on "The No. 1 Reason You Should Not Buy Military Stocks in 2017," period.