The growth of e-commerce continues to be a bountiful field for investors to find great stocks.

In the fourth quarter of 2016, the Commerce Department reported that e-commerce sales increased 14.3% year over year to $102.7 billion, while total retail sales increased 4.1% in the same period. E-commerce sales represented only 8.3% of total retail sales in the U.S. alone giving companies like PayPal Holdings (NASDAQ:PYPL) and Amazon.com (NASDAQ:AMZN) a long growth runway.

These two online behemoths are in the sweet spot of a long-term shift in how people all over the world are transacting in commerce and represent great choices for investors to consider. 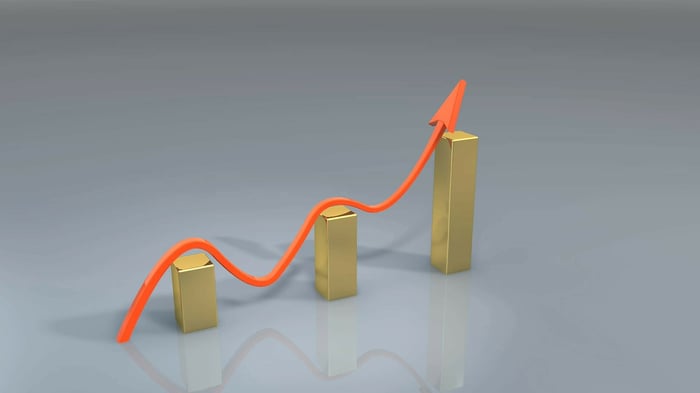 According to Datanyze, PayPal dominates online shopping with a 76.8% share of websites who offer similar payment options. This online dominance led PayPal to process 6.1 billion total transactions in 2016, an increase of 24% over 2015. The actual dollar amount processed -- or total payment volume (TPV) -- was $354 billion, which increased 28% year over year.

Management's strategy to grow TPV has been to spread PayPal's payment service to as many places as possible. The more ways customers can use PayPal, the more customers it can reach. Since it spun off from eBay, PayPal has been on a tear, signing partnerships with major credit card issuers and banks like Mastercard, Visa, Discover Financial Services, and Citigroup. With these deals, customers will be able to use their credit cards in their PayPal digital wallet wherever contactless payments are accepted.

An additional source of growth in the future will be the social payment service Venmo. Venmo's TPV increased 126% to $5.6 billion in the fourth quarter of 2016. This is an annual run rate of about $20 billion -- less than 10% of PayPal's total payment volume -- but this percentage should grow over time.

As a result of current business momentum and the expected increase in payment volume from recent partnerships, management expects revenue growth to be 16% to 17% over the next three years, and PayPal's profit should grow in line with revenue.

Taking a look at the stock's current valuation, the price-to-earnings ratio on expected 2017 earnings is about 25. PayPal generated $10 billion of revenue last year and management places its addressable market near $100 trillion. Given the large runway of growth ahead, the valuation looks very reasonable.

Amazon has completely changed the game for retail. Its rapid growth over the last 20 years left many traditional big box retailers like Wal-Mart Stores scrambling to catch up.

Amazon's net sales have grown from $511 million in its first full year of operation in 1995 to $135.9 billion in 2016, and there are still a lot of areas in the world Amazon has yet to penetrate.

The key ingredient to Amazon's success has been the culture of experimentation that CEO and founder Jeff Bezos has instilled throughout the company. In his 2015 shareholder letter, he wrote:

One area where I think we are especially distinctive is failure. I believe we are the best place in the world to fail (we have plenty of practice!), and failure and invention are inseparable twins. To invent you have to experiment, and if you know in advance that it's going to work, it's not an experiment. Most large organizations embrace the idea of invention, but are not willing to suffer the string of failed experiments necessary to get there. Outsized returns often come from betting against conventional wisdom, and conventional wisdom is usually right. Given a ten percent chance of a 100 times payoff, you should take that bet every time. But you're still going to be wrong nine times out of ten. We all know that if you swing for the fences, you're going to strike out a lot, but you're also going to hit some home runs.

This approach has a direct connection to Amazon's growth. Amazon's fast-growing cloud-computing service -- Amazon Web Services (AWS) -- seems an odd fit with its retail business, but in fact AWS fits the company's core mission to be the world's "most customer-centric company."  AWS has been beating the competition in cloud services through the same relentless focus on giving customers the best value and the best service available.

In addition to AWS, Amazon Prime was started as an experiment and has been a crucial component to the company's growth in recent years. As a marketing pitch for Prime, Jeff Bezos wrote in his 2015 letter, "We want Prime to be such a good value, you'd be irresponsible not to be a member."  Being a Prime member myself, I can attest there is a lot of truth to his claim.

The success of Prime has disrupted the entire retail industry and changed the expectations of shoppers with free two-day shipping along with other benefits, making the company the gold standard of how online shopping should be done.

Amazon is constantly piling other goodies on top of free shipping like Prime Video, Music, and special exclusive deals on certain items for Prime members which creates a very sticky service. At the end of the day, Jeff Bezos is right: You really do feel it would be irresponsible to cancel your membership.

All together, Amazon's net sales grew 27% in 2016 and cash from operations ballooned to $16.4 billion. From day one, CEO Jeff Bezos has stated that the goal is to maximize long-term free cash flow. This focus has allowed the company to expand its fulfillment center infrastructure while keeping a sound balance sheet. At the end of 2016, Amazon had $25.9 billion in cash and marketable securities with $7.7 billion in long-term debt.

The stock has tracked the growth in net sales and cash flow over time, and I expect it to do so in the years to come. Which means at the end of the next 10 years, you might be irresponsible for not being an Amazon shareholder.