Please ensure Javascript is enabled for purposes of website accessibility
Log In Help Join The Motley Fool
Free Article Join Over 1 Million Premium Members And Get More In-Depth Stock Guidance and Research
By Tyler Crowe - Mar 3, 2017 at 10:15AM

With this past winter being another warm one, it's not looking good for Suburban Propane Partners, Star Gas Partners, or Ferrellgas Partners.

The month of February was not a good time to be in the propane business as shares of Ferrellgas Partners (FGP), Suburban Propane Partners (SPH 1.64%), and Star Gas Partners (SGU 2.29%) all saw double-digit losses. The largest culprit for these losses? Warm winter weather. 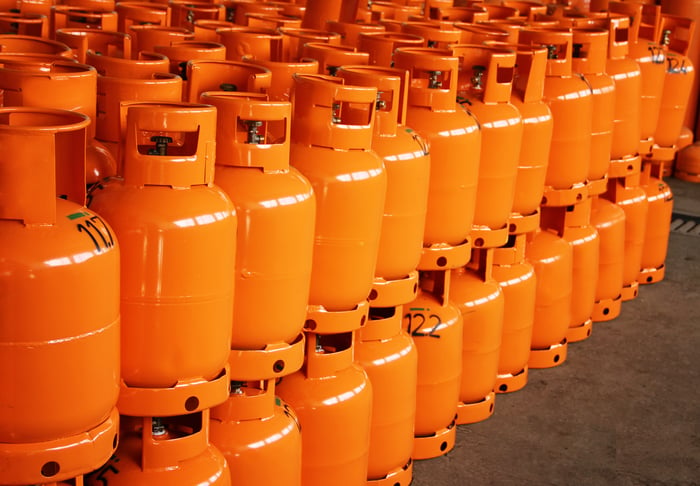 Propane distribution can be a great business for someone looking for relatively stable cash flows that can be passed on to investors. There is little commodity-price risk because distributors can pass price changes on to customers; it is a relatively mature business with a lot of infrastructure in place so there is little need for growth capital spending; and the majority of its business -- home heating -- is an essential that will take precedence over other kinds of customer spending.

All the elements of this investment thesis are predicated on one thing, though, and that is rather consistent customer demand. The only thing that can really disrupt it is the weather, most notably warm winter months. For example, the past two winters have had much higher-than-average temperatures, and as a result these companies have experienced sharp declines in profitability. The only way that they have been able to offset those losses is by making small acquisitions that grow market share. It has become so tough that, last year, Suburban Propane Partners' distribution coverage ratio was 0.6. That means the company was paying out way more in distributions than it was bringing in from operations.

The hope was that a return to average winter temps would drive propane sales and help get these companies back on track. That hasn't been the case, though, as this past winter has proven to be another warmer-than-average one across most of the United States. Large swaths of the country experienced one of the top five warmest winters (December through February) on record. With propane distributors making most of their hay during this time, it would seem that this year's results won't be much of an improvement.

For Ferrellgas Partners, this is even worse because it is trying to dig itself out of a major hole it created with some very poor management decisions. The company attempted to diversify away from the propane and heating oil business by buying some oil and gas midstream assets, but in less than a year it was forced to write down almost all of the value of those assets, fire the CEO who made that acquisition, and significantly cut its payout to pay down debt. If this warm weather is any indication, it will be awfully difficult for the company to make strides toward getting back to profitability.

With warm temperatures ruling yet again, chances are good that the next round of earnings reports from these companies is going to be rather weak. It also wouldn't be surprising if we see some distribution cuts across the board. Suburban's payout was already hanging by a thread, and Ferrellgas Partners is under a lot of pressure from its creditors to pay down debt. The one company that seems to be in somewhat good shape is Star Gas Partners as it has a relatively decent-looking balance sheet and its payout is modest enough that the company has room to maintain it for some time.

The biggest challenge in investing in home heating and propane distribution is predicting the weather. We have had three consecutive years in which winter temperatures were among the five warmest on record. While there are no guarantees that the current trend will continue, it doesn't bode well for any of these companies. So investors shouldn't be surprised if we see some major announcements related to payouts in the coming months.