When Ameresco Inc (NYSE:AMRC) reported financial and operating results for its fourth quarter and fiscal year 2016 on March 2, the market was ecstatic, pushing shares up more than 17% on a combination of beating analyst expectations for profits, a solid order backlog for future business, and continued optimism around infrastructure investment in coming years.

Let's take a closer look at Ameresco's results and set some expectations for the future. 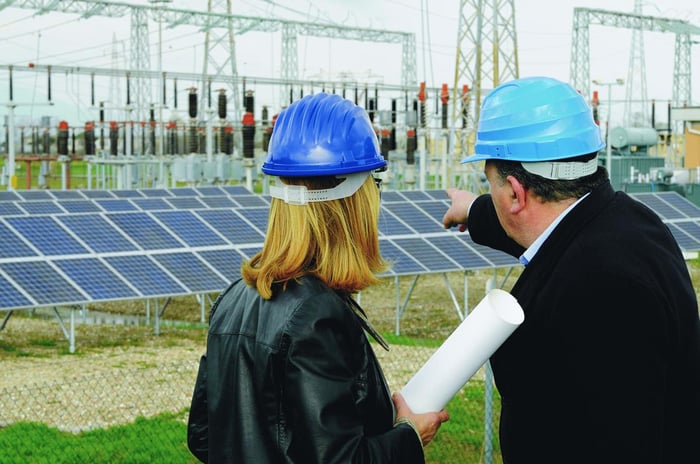 Revenue growth was small in 2016, but it was far more profitable

One major thing that affected Ameresco's profits in 2016 compared to its losses in 2015 was the restructuring of its Canadian segment. In 2015, the company took more than $6 million in charges against a single project in Canada, with over half of that coming in the fourth quarter alone. Since that time, Ameresco has made significant changes in its business in our northern neighbor, focusing on smaller -- yet more profitable -- projects. On the earnings call, CEO George Sakellaris said that the company's restructuring of its Canadian business is essentially done and that he expects this segment to be profitable going forward. But it's important to note that the profit jump related to the Canadian segment wasn't so much a jump as a one-year correction after major losses in 2015.

Company-owned assets, however, are set to be a major growth driver in the years ahead. In recent years, management has prioritized developing energy-producing projects that Ameresco will retain ownership of and then sell the power output from. The company has also put more emphasis on selling long-term operation and maintenance agreements on these kinds of assets as well. According to Sakellaris, the revenue streams -- which are recurring in nature and can be under contracts more than 20 years in length -- from this business contributed 20% of total revenue in 2016, but were a much bigger 50% of the company's EBITDA (earnings before interest, tax, depreciation, and amortization).

Contracted and awarded backlog looks to be in solid shape

At $1.5 billion, Ameresco's total backlog didn't change over the course of the fourth quarter. And while growing it would have been ideal, the company managed to deliver on a solid quarter's worth of sales without seeing the backlog shrink. Furthermore, there's a clear argument that the backlog did indeed improve, since the portion of it that is fully contracted increased from $443.8 million to $534.1 million -- nearly $90 million dollars in business that moved from "awarded" to "under contract" in the period.

The company also again increased investment in assets it will retain. With an additional $79 million in projects begun in the quarter, Ameresco now has $228 million in assets under development it will retain ownership of and sell the power production from on long-term contracts.

Overall, Ameresco wrapped up a nice bounce-back year and started 2017 with more contracted and awarded business than it had one year ago. This sets the company up for what could be an even stronger 2017, particularly considering the improvements in its Canadian business and what seems to be a lot of political goodwill with regard to infrastructure spending.

Considering that the federal government is a major part of the company's business, there's definitely upside tied to increased infrastructure business. At the same time, there's still uncertainty whether the gridlock will break in D.C. and if spending will actually happen in the near future.

Sakellaris addressed that on the call, as well as concerns that the Trump administration could be more likely to reduce spending and potentially harm Ameresco. He pointed out that essentially all of the company's business with the federal government is economics-driven and doesn't require upfront capital outlays from government agencies. He also pointed out that the past four administrations have all leveraged energy-savings performance contracts -- which is the basis of how Ameresco works with federal agencies -- and that the current administration has emphasized public-private partnerships, which could further benefit the company going forward.

Of course, it's important to balance the potential for increased infrastructure spending and optimism around the new administration's priorities with the reality that it's too early to really know how it will work out. Nonetheless, there's no arguing that today's Ameresco is more profitable than the company was one year ago and that its strong backlog offers some measure of security as the politics play out.