Please ensure Javascript is enabled for purposes of website accessibility
Log In Help Join The Motley Fool
Free Article Join Over 1 Million Premium Members And Get More In-Depth Stock Guidance and Research
By Steve Symington - Updated Mar 5, 2017 at 12:50AM

Hint: It's not the self-proclaimed "King of Beers." And it's not named for an American patriot.

If there's one industry that has consistently demonstrated its staying power over the years, it's the brewing business. After all, good, consistent beer always keeps consumers coming back for more. And brewing companies are more than happy to oblige.

But it's also no mystery all beers are not created equal. And when it comes to the question of America's favorite beer, the answer might surprise you. 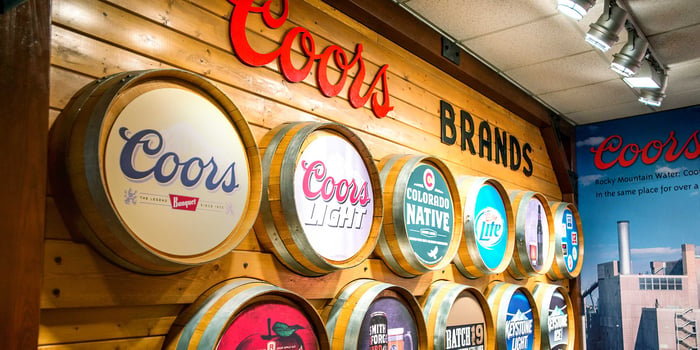 That's right; Coors has won the hearts of the most Americans. IMAGE SOURCE: MillerCoors

To be fair, "favorite" is a subjective term. So to better quantify what Coors' victory here means, note that the index looks at "brand engagement" -- something Brand Keys president Robert Passikoff describes as a "measure of how well a brand meets expectations consumers hold for the path-to-purchase drivers in a given category."

And in fact, keeping in mind that the index examined 740 total brands across 83 categories, Coors was one of only 15 companies to show up for the first time in its respective category as a brand engagement champion.

Passikoff elaborated, "These drivers and expectations can be measured against a category Ideal (100%), with brands best meeting consumers' expectations generating greater loyalty and profits. Brands that cannot meet expectations lose customers and market share." (Emphasis mine.)

And you can bet that Coors brand owner Molson Coors Brewing Company (TAP -0.70%) will do everything in its power to sustain this momentum. Last month, Molson Coors pledged to continue investing heavily in its legacy brands by bolstering sales capabilities and further improving execution as a supplier, including a suite of cutting-edge sales technologies and tools rolled out across all of its markets.

The timing of Coors' win is also impeccable considering Molson Coors only just closed on its $12 billion acquisition of SABMiller's 58% stake in MillerCoors last October -- a transaction SABMiller was required to facilitate to receive regulatory approval for its own megamerger with fellow industry giant Anheuser-Busch InBev (BUD 0.26%) last year.

Molson Coors emerged as the world's third-largest global brewer by enterprise value in the process, and it can look forward to even greater economies of scale, cost synergies, and wider distribution opportunities for its brands as a result.

But you can also be sure other brewers will continue their own relentless quests to fill the bellies of thirsty consumers.

For example, AB InBev confirmed last week that it now boasts an incredible 18 beer brands that each generate at least $1 billion in annual sales, and outlined its own path to generate more than $2 billion in post-merger synergies as it continues its integration with SABMiller. Incidentally, AB InBev also commanded six beers on Brand Keys' top-10 list, including Corona (No. 2), Michelob (No. 4), Budweiser (No. 5), Busch (No. 7), and Stella Artois and Miller (tied for No. 9).

Meanwhile, Yeungling and Boston Beer's Samuel Adams tied for third place, Heineken's Dos Equis brand and its namesake lager took sixth and eighth, respectively, and Pabst rounded out the list at No. 10.

If one thing is clear in the end, it's that this impressive slate of brewing industry leaders will only continue to jostle for higher sales and greater market share going forward. But for at least a little while, Coors can stand tall as America's favorite beer.