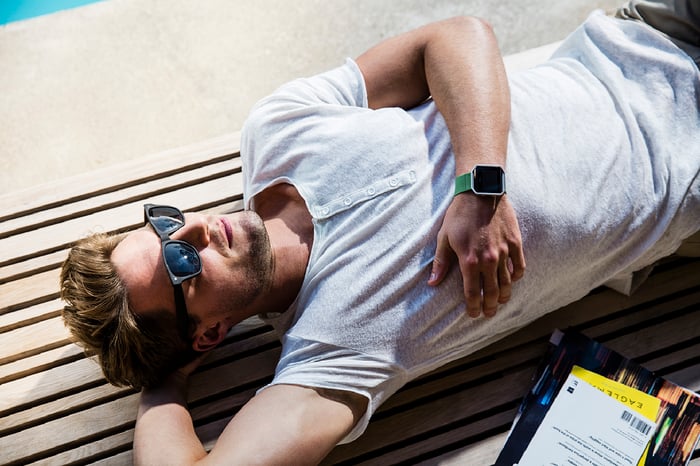 With Fitbit's (NYSE:FIT) fourth-quarter earnings report now out, it's clear the fitness wearables company has had a challenging quarter. Fitbit's stock has gone essentially in one direction since its IPO, and this has left investors wondering when or if things will turn around. 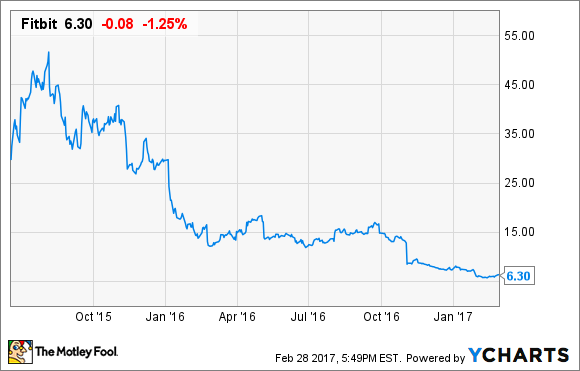 While key metrics for the company -- revenue, profit, unit growth and costs -- were disappointing, there was some good news in an otherwise terrible earnings report. Even though things look bleak for Fitbit, the company's healthy cash position buys them some time to get on the path to recovery. Let's review some of the key metrics to watch as Fitbit tries to get more steps logged on its fitness tracker in the right direction.

Overall revenue was down 19%, and for a growth company, that's more than disappointing. As you can see in the chart below, the year-over-year growth has slowed every quarter since its high in Q2 2015.

While the softness in the domestic revenue was the biggest driver of the year-over-year decline, Fitbit is still number one in terms of dollar share of fitness trackers sold in the US, clocking in at 81% share.

Around the globe and the internet, Fitbit saw positive signs of year-over-year revenue growth: Europe, Middle East and Africa (EMEA) region was up 86%, India up 248% and direct to consumer (through Fitbit.com) was up 45%.

Accessory revenue was called out as a highlight and accounted for $3.36 per unit for the full year, up 118% from 2015. But this good news was masked because the U.S. accounts for 71% of revenue, and the softness in the domestic market more than offset these gains.

No denying the elephant in the room, James Park, CEO of Fitbit, addressed the slow growth in the U.S. in Fitbit's earnings call. He said that the slow growth is not "...a category or competition issue despite an aggressive promotional environment in the fourth quarter but rather is a reflection of the saturation of the innovator and early adopter segments of the market."

While, investors should be pleased that this is not a product issue, saturation of Fitbit's largest market is worrisome. In addition to the unit volume being down, the average revenue per device sold was down in the fourth quarter. 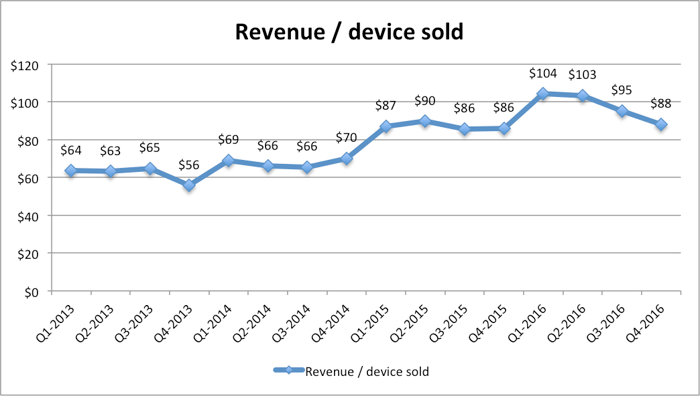 But not all the news is bad. Revenue per device sold is up 11% for the year. Fitbit's Charge 2 was the number one connected health and fitness device as of the end of Q4, based on units. Fitbit's new products: Charge 2, Alta, Blaze, and Flex 2 accounted for 96% of the revenue for the fourth quarter and 70% for the full year. It seems that Fitbit's new products are winning with customers, and despite the fourth-quarter softness, Fitbit was able to have positive gains in price and a 4% unit growth year-over-year.

Warranty reserve is the amount of money set aside to cover warranty expenses for all the devices sold. For the last several quarters, Fitbit has had to increase this reserve to cover "legacy products." This means that Fitbit had underestimated the warranty costs for fitness devices previously sold and had to spend more than expected fulfilling warranty policies.

Having warranty costs more than double has a material impact to Fitbit's bottom line. Bill Zerella, Fitbit's Chief Financial Officer, addressed the warranty charges in Fitbit's earnings call. He explained that the legacy products Charge and Charge HR products are no longer being sold and that return rates have stabilized. He went on to say that "we think this exposure is going to be predominantly behind us and what we're seeing is certainly improved warranty rates and improved quality with all of our new products." With Fitbit's sales predominantly being driven by new product lines, it seems that the company can put these issues in its rearview mirror.

Fitbit's acquisitions of Pebble and Vector this year added redundant costs to Fitbit's structure. In response, Fitbit announced layoffs of 6% of its staff in December. Additionally, the company took several one-time charges in the fourth quarter including: $78 million for writedown of tooling equipment and component inventory, $41 million increase for higher than expected returns and an increase of warranty reserves by $17 million for legacy products. That's the bad news. Good news is that the layoffs and these one-time charges are now behind it.

Fitbit cut additional costs by resizing its marketing spend to match the forecasted revenue and changing the business model for accessories to a more cost effective partner and licensing model. The result is that the company has already reduced operating expenses to run rate savings of $200 million per year. Now, a leaner Fitbit can focus on executing the company's 2017 plan.

A bright spot in Fitbit's earnings report is the size of the active community, which grew to 23.2 million users. While some are disappointed at the slowing growth of this community, Fitbit claims it has the "largest social fitness network as of year-end." This active network has a number of benefits for Fitbit, including greater brand awareness. As a size comparison, Fitbit's active user community is currently almost twice the size of the active members for the Starbucks rewards program.

No doubt, 2016 was a tough year for Fitbit, but the company is certainly not dead. The strength of the active user community, bright spots of growth around the globe, solid new product adoption and a leaner cost structure offers investors signs of life for this pioneering fitness wearables company. Lastly, Fitbit's healthy $706 million of cash and short-term investments give the company time to mend from a difficult 2016.