Please ensure Javascript is enabled for purposes of website accessibility
Log In Help Join The Motley Fool
Free Article Join Over 1 Million Premium Members And Get More In-Depth Stock Guidance and Research
By Joe Tenebruso - Mar 5, 2017 at 11:23AM

Unless you spend time in small Midwestern towns, you might never have heard of Casey's General Stores. But this dividend growth stock may be just what you're looking for.

As an investor in your 50s, you're likely focused on growing your nest egg so that it can help support you when you retire. You're may also be interested in building a portfolio that generates a passive income stream, ideally one that will grow over time.

Fortunately, well-chosen dividend growth stocks can help you accomplish both of these goals. And with its powerful wealth-building combination of increasing dividend payouts and strong share price appreciation, Casey's General Stores (CASY 2.49%) is one of the best stocks available in the market today. 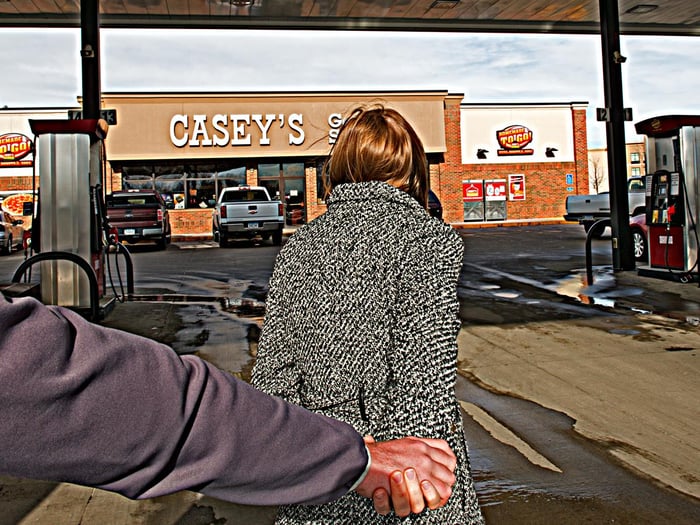 Casey's General Stores owns and operates nearly 2,000 gas station and convenience store outlets in 14 Midwestern states. While it may not operate in the most exciting industry, its dividend and stock price growth have been anything but boring. 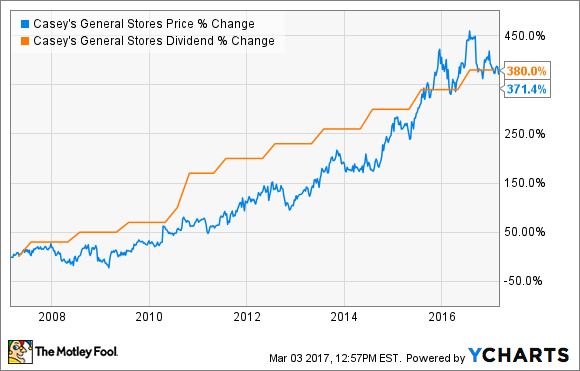 Casey's strategy is to focus on smaller communities that typically don't have a lot of options for gas or food. Nearly 60% of Casey's stores are in towns with populations under 5,000, and more than 80% are in communities of less than 20,000. While these areas offer fewer potential customers, they also tend to attract far less competition; Casey's is often the only place in these small towns where you can get some gas, groceries, or a quick meal. It's this focus on underserved communities that's allowed Casey's to carve out a successful niche in an otherwise extremely competitive space.

Interestingly, Casey's fancies itself a pizza parlor as much a gas station: It serves up more than 19 million pizzas each year, making it the fifth-largest pizza chain in the United States. Moreover, the company's pizza delivery program has been so successful that Casey's plans to accelerate its rollout across its store base in the coming quarters. With fewer than a third of Casey's stores currently equipped for pizza delivery, this program has the potential to be a significant multi-year growth driver for the company. 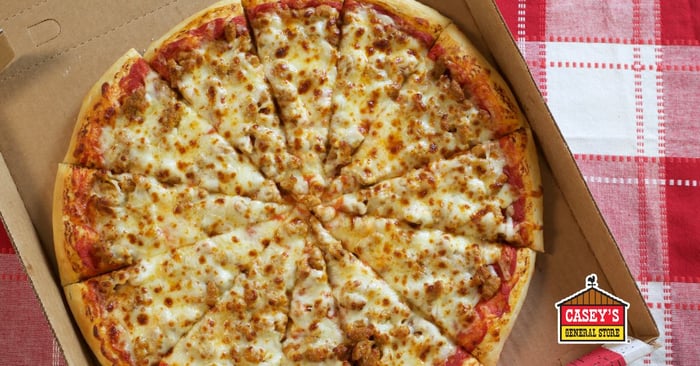 Combine all this with a remodeling program that's steadily converting Casey's stores to 24-hour formats, and you have a recipe for sustained same-store sales growth and improved store-level profits. And as Casey's earnings grow, so too should its cash payouts to shareholders.

Analysts expect Casey's to grow earnings just under 10% annually over the next half decade. With a payout ratio of only about 17%, Casey's should have the ability to raise its dividend above its earnings growth rate in the years ahead, likely in the low to mid double-digit range. And as the chart above shows, Casey's stock price tends to correlate over the long term with the size of its dividend. Moreover, returns of 10% to 15% may be more than the overall stock market can provide to investors from its current lofty levels during this period, which makes Casey's General Stores a likely market-beating investment for those who buy its stock today.

Dividend fueled growth and the potential for market-beating overall returns -- these are two things that middle-aged investors should seek out, and that Casey's offers. As such, if you're a 50-year old investor, you may want to order up a slice of Casey's General Stores.