Please ensure Javascript is enabled for purposes of website accessibility
Log In Help Join The Motley Fool
Free Article Join Over 1 Million Premium Members And Get More In-Depth Stock Guidance and Research
By Rich Smith - Updated Nov 8, 2017 at 2:52AM

You can hack it to pieces, but this solid polymer lithium metal battery will keep on ticking -- and not explode.

Pure, metallic lithium. This is a holy grail. These are what will make an electric car side-by-side competitive with the internal combustion engine.

Ionic Materials enables use of lithium metal anodes, sulfur cathodes, and more. The result is much higher energy density and performance.

Have you read The Powerhouse, Steve Levine's epic tale of scientists at the Argonne National Laboratory working to invent a new battery that will make electric cars lighter, and let them drive farther, at half the price of car batteries today?

Or perhaps you caught the NOVA episode, which offered a slightly different take on America's "search for the super battery" that will power our smartphones, our laptops, and even our cars in the future?

If so, you may have noticed: All of a sudden, battery science is cool. 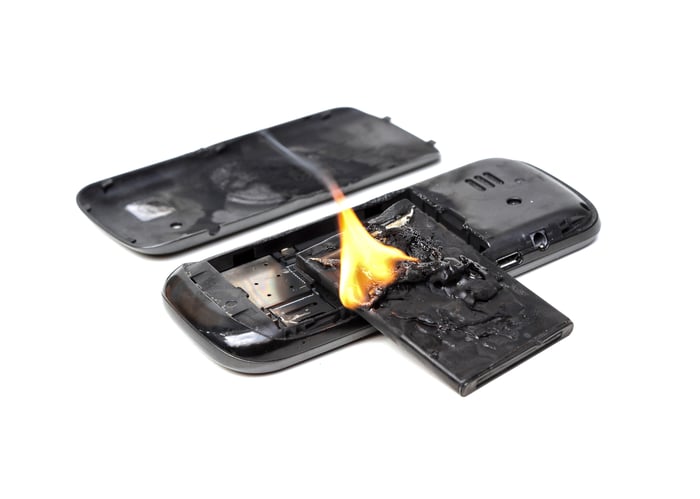 Lithium batteries are great ... until they do this. Ionic Materials batteries won't do this -- even if you stab them with a screwdriver. Image source: Getty Images.

If you've been following the story of Elon Musk and the Gigafactory that Tesla (TSLA -1.62%) is building in the Nevada desert, you may be under the impression that Musk's "18650" lithium-ion batteries are currently the height of battery technology. Well, they are and they aren't.

Lithium-ion batteries were first commercialized by Sony (SONY -0.78%) back in 1991. And, yes, if you pack enough of them onto a car chassis, you can make a Tesla drive 200, 250, or even 300 miles on a single charge, and yes, that's a greater range than most other electric cars offer today. But even the 18650s that the high-tech Gigafactory will churn out employ the same basic lithium nickel-cobalt-aluminum chemistry that's been in use for more than a decade.

Employing a liquid electrolyte to shuttle lithium ions between anode and cathode, 18650 batteries still carry at least a (small) risk of incurring a catastrophic meltdown, such as the incidents that sunk Samsung stock last year. And relying on a limited volume of lithium ions (about 2% of the battery's volume), intercalated within a graphite anode, 18650s still provide less power than you could get from a pure lithium metal anode -- the aforementioned "holy grail."

Luckily for electric-car enthusiasts and "green power" afficionados, there's a better battery on the way.

It's called the solid polymer lithium metal battery, and it was invented in 2011 by Tufts professor and former Bell Labs researcher Mike Zimmerman, who's now working to commercialize the prototype for mass production through his new company, Ionic Materials.

Instead of a liquid electrolyte, Ionic uses a solid polymer (a plasticlike material) to allow lithium ions to flow from anode to cathode and back again. According to Ionic, this novel type of electrolyte::

Ionic also uses a lithium metal battery, so there are more lithium ions to move. That means Ionic's battery packs a whole lot more punch than the lithium-ion batteries in use today. Oh, and because it's basically a piece of plastic, it's almost infinitely malleable and can be manufactured in form factors conducive to different uses -- long, wide, and flat for powering tablets or cylindrical to power flashlights. Why, it could even be molded to fit whereever needed within a car chassis.

As a bonus, it's worlds away from today's lithium-ion batteries in terms of safety. On NOVA earlier this year, host David Pogue attacked Ionic's battery with a vengeance, piercing it with a screwdriver and snipping off bits with scissors. Not only did the solid polymer lithium metal battery not explode (as any other lithium-ion battery would have), it actually kept working, powering an iPad even as it was hacked to pieces.

When will it arrive?

No, you cannot buy one, at least not right away.

In 2016, Ionic Materials won a $3 million Advanced Research Projects Agency-Energy (ARPA-E) grant from the Department of Energy. Funding began in 2017, which will help to get the ball rolling, but Ionic's battery is not yet available commercially.

That said, Ionic Materials says it expects to find a partner and begin manufacturing its polymer super-battery as early as 2018. So stay tuned.