General Motors' (NYSE:GM) car-sharing subsidiary, Maven, is launching a new deluxe car-share service that allows members to get full use of a Chevrolet vehicle for up to 28 days, complete with insurance, $100 worth of gas, and -- something that could be very valuable in certain cities -- a parking space.

The new Maven Reserve service is available now in Los Angeles and San Francisco and will soon roll out in other U.S. cities. On the surface, it's similar to the BOOK car-subscription program launched a few months ago by GM's luxury brand, Cadillac. But while BOOK could become a transformative offering over time, it's less clear that Maven Reserve has the same potential -- or a similar intention. 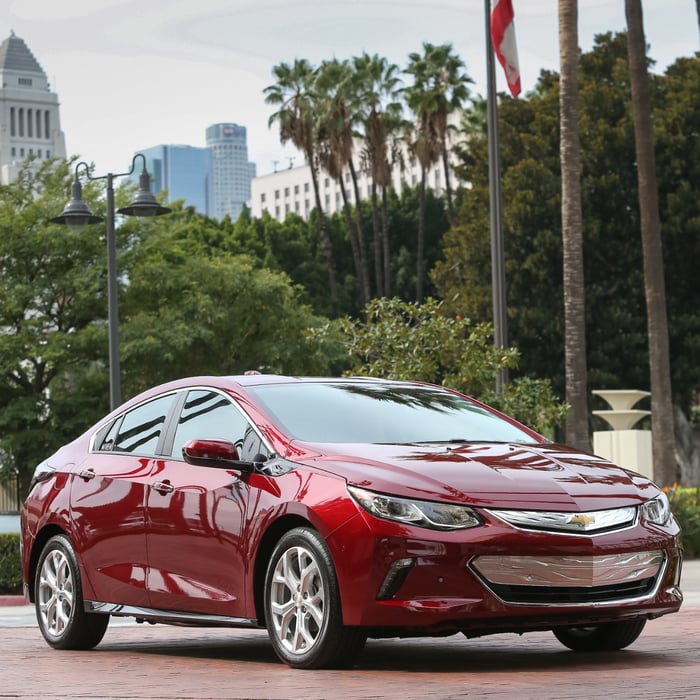 What GM said about Maven Reserve

GM said that Maven Reserve was launched in response to demand from some unique clients:

The service was developed initially for entertainment and entrepreneurial communities seeking frictionless, on-demand transportation options and longer-term access to vehicles.

Los Angeles is among the most prolific cities for the entertainment industry and attracts more production companies, celebrity talent agencies and TV pilots than any other city in the United States. The associated workforce spends weeks or months at a time on-site cultivating content, and a need exists for longer-term vehicle reservations.

Right now, the only vehicles available through the service are Chevrolet's Tahoe SUV and plug-in hybrid Volt sedan. GM's thinking is that the Tahoe will serve the need of production companies transporting crews or equipment, while the Volt will allow for efficient transportation around San Francisco and between the city and Silicon Valley.

While its origin was rooted in the needs of business clients, Maven Reserve is available to anyone via a mobile app, GM said. The service will be rolled out in more cities over the next several weeks. GM didn't give pricing, saying only that it will vary from city to city.

The regular Maven City service, launched just over a year ago, is now available in 17 cities in the U.S. and Canada.

It's hard to say. Functionally, Maven Reserve is similar to the BOOK program from GM's luxury brand, Cadillac. I've argued that BOOK is something that could become a big deal in time and that could even be disruptive to traditional luxury-car ownership. Right now, I'm less convinced that this new Maven program has the same potential.

BOOK is a subscription service: Members of Cadillac BOOK get access to any of several different top-tier Cadillac models, and can switch between them, for a flat monthly fee of $1,500 that includes insurance and delivery (but not parking).

That fee is high, but for Cadillac it makes some sense: It's roughly equivalent to a monthly loan payment on a top-of-the-line Cadillac CT6 or Escalade. For some -- people with plenty of money but little free time, for instance -- BOOK could make sense as a substitute for traditional car ownership.

Will Maven Reserve? It'll depend on the pricing, but the intent of the program seems different. I don't think GM is thinking of Maven as a subscription service that would replace ownership for mainstream Chevrolet customers. Instead, I think the intent is exactly what GM says it is: a program that allows customers with specific needs, who are probably in a city that isn't home, to get a vehicle for an extended period.

If so, it's likely to be an incremental revenue booster for Maven, but not quite a game changer -- at least not yet.