Target (NYSE:TGT) bought something extremely valuable last week when it released its outlook for 2017. It bought time. Three years, to be specific. The cost came directly out of the pockets of investors, though, and Target's stock plunged 12% following the company's fourth-quarter earnings report.

Target told investors it's heading into a year of investment, and it won't return to profit growth until 2019. If that sounds familiar, it's because Wal-Mart (NYSE:WMT) told a similar story to investors in 2015. Shares of Wal-Mart faced a similar double-digit percentage-point drop when it announced its plans.

Target plans to spend $7 billion to remodel stores, expand its small-store format, drive online sales growth, and lower its prices to compete with Wal-Mart and Amazon.com (NASDAQ:AMZN). Overall, it expects the investments to cost the company $1 billion in operating profits this year. While Target has no pressure to grow profits in the short term, will its investments pay off in the long run? 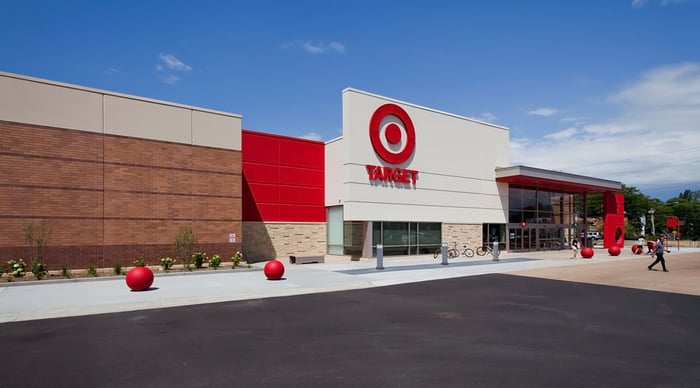 While Wal-Mart and other brick-and-mortar retailers lowered prices to compete with Amazon.com, Target raised prices the past few years. In fact, Target's sales declines over the past few years would have been much worse if Target hadn't focused on higher-priced, higher-margin products.

But now it's reversing direction, and it's hoping to drive greater foot traffic with lower gross margin. Target will work to lower prices over the next three years to compete with the pricing of Wal-Mart (which recently made its own efforts to lower prices even more) and Amazon. "We are aggressively investing in the business to make sure we are highly competitive on price across our assortment," CEO Brian Cornell told investors.

In an effort to drive higher foot traffic, it's also remodeling stores. It expects to remodel 600 stores by 2019, and each remodel will cost around $5.5 million, according to management. Target also plans to open 100 new smaller format stores in cities and on college campuses.

While Target's remodels should help drive same-store-sales growth into positive territory again, those sales will come at a lower gross margin. It's hard to see how Target's bottom line benefits from all this new spending, even in the long run.

Taking on the online competition

But Target is growing off a much smaller base than its competing retailers. Digital sales amounted to just $3.4 billion last year for Target. By comparison, Amazon sold $124 billion worth of stuff online in 2016.

Target plans to compete by revamping its supply chain and using stockrooms at its stores to ship directly to customers. With 1,800 stores in the U.S., that makes it extremely competitive with Amazon. Amazon only has a few dozen fulfillment centers, but they're very strategically located, as 44% of the U.S. population lives within 20 miles of an Amazon fulfillment center.

Wal-Mart is working on something similar and recently started offering free two-day shipping on about 2 million products sold online. Of course, that pales in comparison with the selection of Prime-eligible products on Amazon.

But Target again suffers from the same conundrum as Wal-Mart when it comes to attracting more online sales. Amazon is at the top of people's minds when they think of online shopping. Overcoming that hurdle is much more important than improving fulfillment speeds at this point.

Target's plans to spend $7 billion over the next three years are bold, and given the current trend of sales declines, the company could use some shaking up. It's certainly feeling some pain in the short term as it resets expectations. It's unclear, though, if its plan to invigorate long-term growth will actually pay off. But that $7 billion and massive drop in market cap bought Target three years to prove the doubters wrong.