McDonald's is set to launch a new way to order this year.

A little more than a decade ago, McDonald's (MCD -0.22%) started introducing luxury espresso drinks to its coffee menu. The move was aimed at combating the ever-growing popularity of Starbucks (SBUX -0.65%) as a morning ritual for millions of consumers. McCafe now generates $4 billion in U.S. sales annually for McDonald's.

Now McDonald's is copying Starbucks again. The fast-food chain will introduce mobile order and pay to 20,000 restaurants by the fourth quarter. Mobile order and pay has been extremely popular with Starbucks and other restaurants like Domino's Pizza (DPZ 0.07%), driving more orders and reducing labor costs. McDonald's is hoping to see similar benefits. 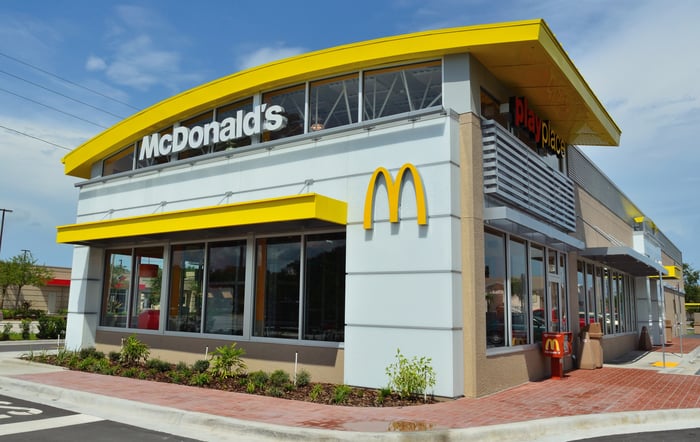 Becoming the Domino's of burgers

Domino's has seen a lot of success with its digital ordering platform. Sixty percent of U.S. sales and 50% of international sales came from digital orders by the end of 2016.

Customers love digital ordering because they don't have to wait in line or on hold in order to tell someone what they want. When they walk into the restaurant, picking up the order is usually much quicker.

Restaurants love digital ordering because it means nobody has to take people's orders, and they can just focus on making the food. That reduces overhead.

Domino's has invested heavily in making the digital ordering experience as convenient as possible, and it's paid off. Sales have surged over the last four years. Total revenue at Domino's is up 47% in 2016 compared to 2012. By comparison, McDonald's sales declined 11% during that same period (although U.S. same-store sales are starting to tick back up).

There's no guarantee mobile ordering will reignite sales growth at McDonald's, though.

Avoiding the same problem as Starbucks

Starbuck's disappointed investors with its fourth-quarter earnings. The biggest challenge the company faced was slowing same-store-sales growth due to too many mobile orders backing up the line for walk-in customers.

Indeed, mobile ordering may not solve all of McDonald's problems. If customers have to wait longer in the drive thru because workers are busy with mobile orders, they will find somewhere else to eat. That's what happened to Starbucks, and if McDonald's isn't prepared it'll happen to the burger joint, too.

If workers can't act efficiently enough to fulfill an influx of mobile orders while keeping up with drive-thrus and walk-ins at the same time, the potential cost savings of mobile ordering will go out the window. It's a delicate balancing act, especially with workers that are compensated at minimum wage. Increasing their workload too much may cause McDonald's to experience higher turnover.

Mobile order and pay isn't just some magical sales switch that a restaurant can turn on by deploying a new app in the App Store. If it was, everybody would be doing it already. There are operational challenges that McDonald's will have to face in order to stave off any negatives while experiencing all the benefits of letting customers order ahead on their smartphones.