At Mobile World Congress, China-based mobile chip vendor Spreadtrum announced a new chip dubbed the SC9861G-IA, targeted at the "global mid-level and premium smartphone market." The chip is unique for a couple of reasons. The first is that it uses eight of Intel's (NASDAQ:INTC) Atom-based processor cores codenamed Airmont. The second is that it is built by Intel using its 14-nanometer chip manufacturing technology.

Spreadtrum says that the chip "is scheduled to go into mass production in the second quarter of 2017," which suggests availability in shipping devices at some point in the second half of 2017. 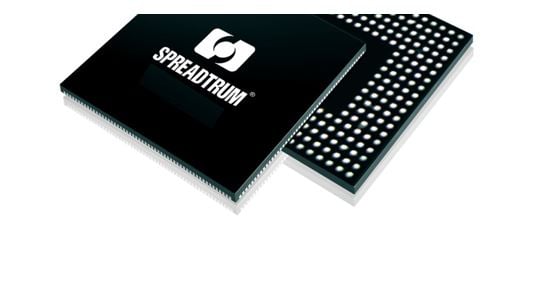 Interestingly, this product isn't being pitched as a co-branded/co-developed chip from both Spreadtrum and Intel; instead, it is pitched as a Spreadtrum product that is manufactured by Intel's contract chip manufacturing division, known as Intel Custom Foundry (ICF).

In this column, I'd like to do two things: what this chip could mean for Intel and what the potential long-term implications of this announcement could be for both companies.

In the near term, I doubt that this chip will find significant success in either the mid-range or premium smartphone markets. The processor cores are quite slow currently for a mid-range smartphone, let alone a premium product.

To put this into perspective, the Qualcomm (NASDAQ:QCOM) Snapdragon 652 achieves a single-core score of 1467 in the popular Geekbench 4 performance test. Spreadtrum says that the Airmont CPU core inside the SC9861G-IA runs at 2GHz. Based on how other Airmont-based chips perform in Geekbench 4, the Spreadtrum chip is likely to be way behind the competing Snapdragon 652 in per-core performance.

From a user-experience perspective, the Spreadtrum chip looks as though it'll be markedly inferior to the competing Snapdragon 652 chip.

In addition to being slower than the competition, at least in CPU tasks, I'd expect that this Spreadtrum chip will be less desirable to potential customers because it runs Intel Architecture (a.k.a. x86) rather than the ARM architecture. Although Intel invested significantly in bringing up the software ecosystem around Intel Architecture, it still doesn't appear to be as robust as the incumbent ARM ecosystem, which could lead to app compatibility and/or performance issues.

I just don't know why a smartphone vendor would pick this chip over something from Qualcomm, MediaTek, or even from elsewhere in Spreadtrum's portfolio.

At the Intel Developer Forum last year, Intel announced that it had inked a deal with ARM Holdings to make its intellectual property available for customers designing chips to be manufactured by ICF.

I suspect that Spreadtrum will cease using Intel's Atom processor cores for future ICF-built chips going forward. Instead, I expect Spreadtrum to use ARM cores optimized for Intel's manufacturing technology.

If Spreadtrum can, using ARM technology, fully leverage Intel's manufacturing technology to build great mobile processors, then that could ultimately prove to be a long-term "win" for both Spreadtrum and Intel.

Intel would win because Spreadtrum is a reasonably successful mobile processor vendor, and if it can get Spreadtrum to move significant volumes of its products into Intel's manufacturing plants, then that's revenue and profit upside for Intel.

Spreadtrum could win if Intel's claims that its manufacturing technology is superior to competing technologies hold up and ultimately allow Spreadtrum to build better and more cost-effective chips than it could have using alternative technologies.