Please ensure Javascript is enabled for purposes of website accessibility
Log In Help Join The Motley Fool
Free Article Join Over 1 Million Premium Members And Get More In-Depth Stock Guidance and Research
By Daniel Miller - Mar 6, 2017 at 9:51AM

This automaker has drastically improved its business and profitability since the Great Recession, but the 60% rally it has enjoyed since Trump's election could be short lived.

Regardless of what you think about President Donald Trump, love him or hate him, there's no question the stock market sees him as pro-business, which is why share prices have taken off since his election. Only about a month ago, people were printing T-shirts and hats boasting of Dow 20,000, a meaningless benchmark that was just made even more irrelevant when the Dow closes at 21,000 for the first time ever Wednesday.

This rally has lifted many stocks, but not all of the Trump-powered hype around specific companies is truly worth buying into.

Why people think Trump could help this automaker 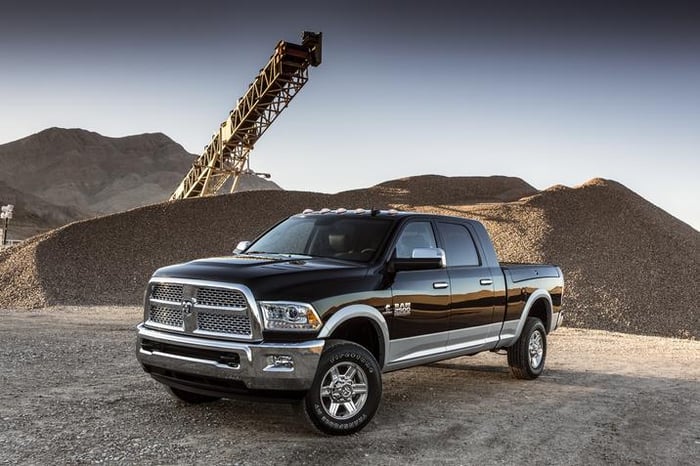 Trump has sniped at many companies via Twitter, but his ire specifically at automakers "moving" jobs to Mexico drew a lot of attention. However, one car company with the potential to benefit from his anticipated policies is Fiat Chrysler Automobiles (FCAU). Here's a look at how the market has treated major automakers since the election. 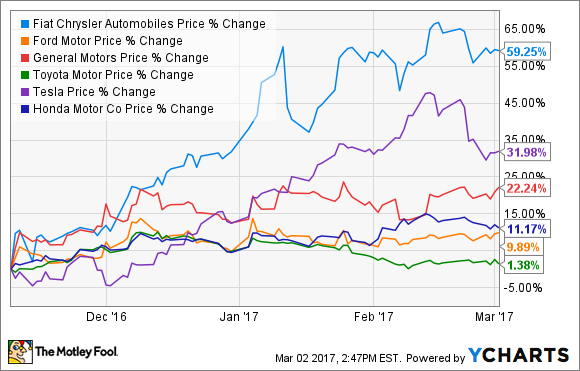 The driving force behind FCA's recent stock price surge is simple: It has the most to gain if Trump relaxes the tough fuel-economy rules put in place by the Obama administration. Sure, Ford Motor Co. (F -1.91%) and General Motors (GM -1.85%) still generate the vast majority of their top and bottom lines from SUVs and full-size trucks, just as FCA does, but the difference is that FCA has largely trailed its crosstown rivals in developing electric cars, hybrids and even self-driving vehicle technology.

Ford, for an example, announced a $4.5 billion commitment to electric and autonomous vehicles in a plan to develop 13 new models over the next decade, including seven new models within the next five years. General Motors has created an entire brand, Maven, to develop smart mobility projects. GM also acquired Cruise Automation as part of its efforts to develop autonomous vehicle technology, launched the Chevrolet Bolt as a mass-market electric vehicle with a single-charge range of nearly 240 miles, and invested $500 million in ride-hailing company Lyft. These deep-pocketed commitments from Ford and General Motors would be difficult for FCA to duplicate because it has much more on its plate amid a still-ongoing company-wide turnaround.

FCA has a much larger debt load than Ford and GM, and is also simultaneously trying to expand its highly profitable Jeep brand overseas while reviving its Alfa Romeo brand and expanding its Maserati brand. Given FCA's easy-to-see difficulty with investing capital in more fuel-efficient vehicles -- which it would have to do if it wants to avoid stiff penalties as fuel-economy rules tighten in the coming years -- it's also clear to see how the automaker will benefit more than its competitors if Trump's team rewrites those rules.

Detroit does have a case

If the targets aren't relaxed, automakers will have to achieve an average fleetwide fuel economy of 54.5 mpg by the 2025 model year, and no matter how you slice it, that's going to be difficult and it's going to be expensive. Moreover, conditions seem much different in 2017 than they were from 2009 to 2011, when those CAFE goals were hashed out. U.S. dependence on foreign oil has been reduced -- just last year it hit a 30-year low. And with fuel prices cheaper, it's more difficult for automakers to convince consumers to spend extra to buy alternative fuel or highly fuel-efficient vehicles.

While Detroit would benefit from weaker standards, to what degree the rules should be relaxed is debatable. The truth, however, is that we don't yet know how Trump's administration will approach the fuel-economy standards, timeline or penalties.

And despite FCA having improved vastly since the recession, its fundamental weakness is clear: At a moment when the automotive industry is poised to evolve more in the next two decades than it has in the last ten decades, FCA its still behind the spending curve on R&D -- and that's why it isn't a stock to buy into for its Trump rally.