CEO Sergio Marchionne also said that the company expects that figure to fall much further in 2017, to less than 2.5 billion euros, and to zero at some point in 2018. Does that mean the Italian-American automaker will be debt-free in less than two years?

Not even close. Here's what some investors seem to be missing about FCA's debt.

What is FCA's "net industrial debt"?

What is "net industrial debt" and how does it relate to FCA's actual debt? Here's how the company explained it in an appendix to its fourth-quarter 2016 earnings presentation: 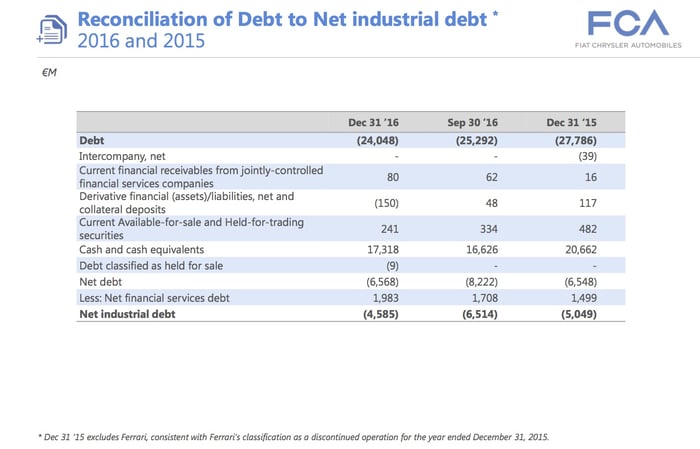 What does that mean? In a nutshell, FCA calculates its "net industrial debt" by taking its total debt and subtracting both cash on hand and debt related to its financial-services arm. (There are some other small adjustments, but that's the gist.)

Long story short: Wiping out FCA's "net industrial debt" won't make the automaker debt-free. It'll mean only that debt attributable to its automaking business will have fallen below its cash on hand.

The business of making cars requires huge up-front expenditures. Developing a new vehicle from scratch can cost as much as a billion dollars, including the costs of its factory tooling -- before a single new car is shipped.

Just about all of FCA's global rivals have significantly less debt than cash, even its old Detroit nemeses. As of Dec. 31, Ford Motor Company (NYSE:F) had $15.9 billion in long-term debt related to its auto business, versus $27.5 billion in cash and another $10.8 billion in available credit lines for total available liquidity of $38.3 billion -- or "net cash" of $11.6 billion. General Motors (NYSE:GM) hasn't reported its year-end results yet, but as of Sept. 30 it had $21.5 billion in cash and $14 billion in available credit lines, versus just $10.8 billion in debt related to its auto business, for "net cash" of $10.7 billion.

Most of the other big automakers are in a similarly cash-heavy position right now. That's smart business: Automakers hold big cash hoards so that they can continue investing in new products during economic downturns, when their profits have historically been squeezed.

That's why FCA has a big cash hoard of its own. But it also has that big debt load, and it will need to make payments on that debt no matter how the economy is doing over the next few years. That could turn out to be a problem when things get tight.

In some ways, it's probably already a problem. While the economy is good and FCA's sales have been strong, the need to pay down debt sucks up a lot of FCA's cash flow. That seems to have kept the company from investing in advanced technologies like self-driving cars and electric powertrains to the same extent as many of its rivals, and that could leave it falling further behind as technology-driven changes transform the auto industry over the next several years.

So why does FCA insist on reporting "net industrial debt"?

Because the "net" number is a lot smaller, leading casual observers to think that FCA's debt load is no big deal.

But as you now know, it's pretty big.