The fourth-quarter results were better than expected, but they still raised questions concerning 2017. As you can see below, contract awards of $5.2 billion were a significant decline from 2016's $7.6 billion, and that meant the book-to-bill ratio declined from 1.08 in 2015 to 0.74 in 2016. Meanwhile, backlog declined by $1 billion. 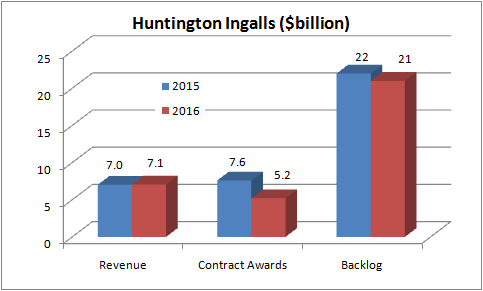 Clearly, the key driver of Huntington Ingalls' stock price will be contract awards in 2017, and/or sentiment on its ability to win new contracts.

There are two lines of thinking for Huntington Ingalls' shareholders here. The first is concern that Trump's calls to cut costs on military programs -- Secretary of State James Mattis has already ordered financial reviews on the F-35 fighter jet and the Air Force One presidential jet -- might hurt profitability at Huntington Ingalls with regard to shipbuilding for the military in the future.

The second acknowledges that Trump's view on Naval expansion is a revenue boon to the company, whether it means lower-margin contract awards in the future or not.

The second view is holding sway for now, and with good reason. Trump visited Huntington Ingalls' Newport News Shipbuilding division last week and talked with CEO Mike Petters regarding buying ships "smarter." Furthermore, in an address to Huntington's employees he talked of how the Navy is "going to soon be the largest it's been. Don't worry." Moreover, he said he had "just spoke with Navy and industry leaders and have discussed my plans to undertake a major expansion of our entire Navy fleet, including having the 12-carrier Navy we need."