Now YouTube -- a subsidiary of Google, the Alphabet (NASDAQ:GOOG) (NASDAQ:GOOGL) company -- is throwing its hat in the ring as well. The company recently revealed YouTube TV, a slightly differentiated television service that costs just $35 per month.

Here's what investors need to know about YouTube TV. 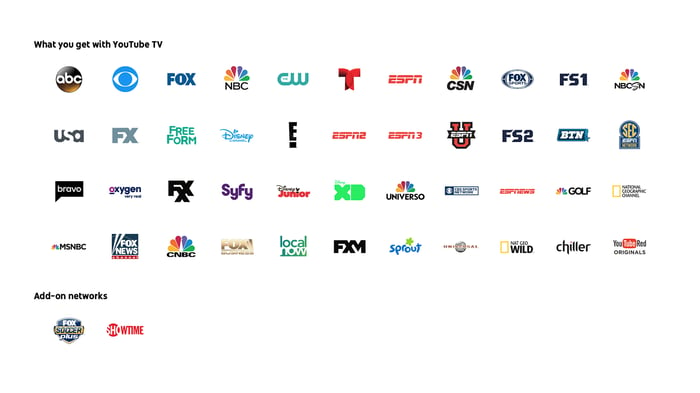 It's missing a lot of traditional cable networks

YouTube focused on signing deals with the big four broadcast companies. As a result, cable-only media companies such as Viacom and Time Warner are missing from the bundle. No CNN, Comedy Central, Cartoon Network, TBS, TNT, or HBO. But it does mean cable networks owned by the big four -- ESPN, FX, USA, E!, and so on -- are all there.

That's kind of the opposite approach of Sling TV. Sling launched without any broadcast networks, inviting subscribers to buy a television antenna to supplement the service.

Importantly, local networks are limited in availability. That's why YouTube TV is launching only in markets where the media companies own the local broadcast affiliate. Sony tried something similar before expanding nationwide with a reduced price for subscribers where live local channels are not available.

The limited geographical reach and channel lineup should reduce the number of subscribers YouTube TV will attract.

Although YouTube TV may lack some of the content available on other platforms at similar price points and the geographic reach of its competition, it has one major advantage. It already owns leading technology in video streaming.

All three of the aforementioned competitors suffered major technical difficulties following their launches. DirecTV Now received a lot of bad press as its servers were overloaded making parts or all of the service unusable. YouTube, on the other hand, already streaming 1 billion hours of video every day.

Consumers may be willing to sacrifice some channels for more reliable service. But YouTube still has to prove that it can deliver where competitors failed.

YouTube TV is a somewhat underwhelming product at launch. With a limited channel lineup and geographic reach, it's unlikely to make any significant impact on YouTube's operations in the near term.

In the long term, however, getting a viable product out there now could lead to a much better product in the future. YouTube is already offering a few differentiating features such as unlimited cloud DVR, AI powered search and personalization (likely backed by YouTube viewer data), and the ability to split the account six ways so different users get different recommendations. If YouTube can get the content deals in place while maintaining competitive pricing, it could be a big winner in the future.