Please ensure Javascript is enabled for purposes of website accessibility
Log In Help Join The Motley Fool
Free Article Join Over 1 Million Premium Members And Get More In-Depth Stock Guidance and Research
By Jim Crumly - Mar 7, 2017 at 9:01AM

Good news about this anti-clotting drug bodes well for the whole pipeline.

Mid-cap biotech Ionis Pharmaceuticals (IONS 2.81%) has an extensive pipeline of drugs built on its platform of RNA antisense technology. Among the wide variety of candidates is one that should make biotech investors sit up and take notice. Let's look at the reasons why the company's anticoagulant drug could get investors' hearts racing. 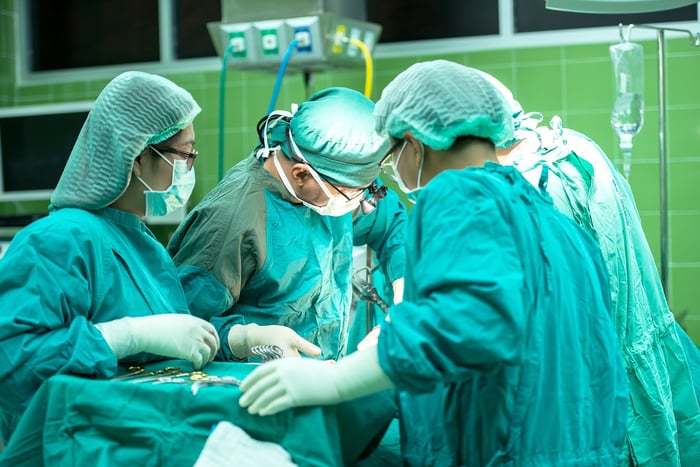 IONIS-FXIRx is a significant improvement over existing therapies

IONIS-FXIRx (Pronounced "Factor 11 Rx") is an anti-thrombotic drug that takes a novel approach to preventing unwanted blood clots. Factor XI is a clotting factor produced in the liver and is important in the pathway of blood coagulation. People who have an overproduction of Factor XI are prone to blood clots, which can trigger heart attacks and strokes. On the other hand, people who are deficient in Factor XI have a lower incidence of blood clot formation but without increased risk of bleeding events. IONIS-FXIRx inhibits the liver's production of Factor XI.

There have been blood anticoagulant drugs on the market for many years, but all of them come with the dangerous side effect of increased risk of bleeding. IONIS-FXIRx would be the first drug that reduces the risk of thrombosis without significantly increasing bleeding risk. This could open up uses of the drug across a wide range of therapeutic environments.

Trial results have been very encouraging so far. A phase 2 study of 293 patients undergoing total knee replacement surgery showed a seven-fold reduction in venous thromboembolic events compared with patients on a currently used drug, and with no increased bleeding. A safety and tolerability study last year involving patients with severe kidney disease on dialysis also showed a decrease in severe clotting events with no treatment-related serious adverse events.

The drug received a big vote of confidence last month

In February, Ionis received a $75 million milestone payment from Bayer AG, Ionis' partner for this drug. Winning this payment for the advancement of clinical development of IONIS-FXIRx was an important hurdle and a major vote of confidence from a top dog in the field. Bayer currently sells the leading oral anticoagulant, Xarelto, with almost $2 billion in sales in the U.S. In fact, Xarelto is expected to become the top-selling drug of any kind in Europe by 2022 -- so yes, this market is huge. With Ionis set up to receive royalties on IONIS-FXIRx in the range of 20% to 30%, the revenue potential is enormous.

Bayer is funding expansion to a second version of the drug

The Bayer announcement came with even better news. Bayer agreed to fund development of a second Factor XI drug based on Ionis' Ligand Conjugated Antisense technology, or LICA. LICA is a chemical modification that allows Ionis to target the delivery of the drug to particular tissues. Historically, a big challenge with RNA antisense drugs has been getting the drug to the proper place in the body with high enough concentration to have an effect. LICA causes a higher drug uptake in particular tissue, in this case the liver, where Factor XI is produced. The result should be more potent action with smaller doses, improving both efficacy and safety.

The LICA version of this drug, dubbed IONIS-FXI-LRx, will have an accelerated phase 1 study. The good news for Ionis investors is the confirmation from Bayer of LICA's potential. Ionis has eight drugs in its pipeline that use the current version of LICA that targets the liver. But the company expects to develop new versions that can be directed at other tissues as well, and therefore enhance delivery of even more drug candidates.

The recent news on IONIS-FXIRx is good news for investors. Not only could it be a future blockbuster, but progress on this drug provides additional confirmation that the company's approach to medicine can be used effectively and safely on a wide variety of diseases. Ionis, with its extensive pipeline and stock price 28% below its all-time high, is an attractive opportunity for biotech investors.