Interestingly, those plans are eerily similar to those already implemented by fellow casual-dining restaurant specialist Buffalo Wild Wings (NASDAQ:BWLD). But before we get to that, let's take a closer look at what BJ's has in store. 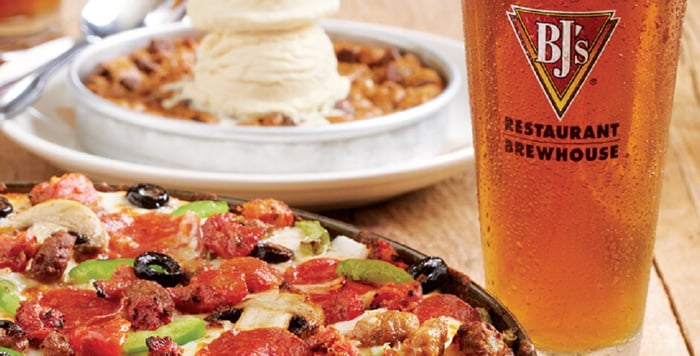 "One of our strongest-ever sales initiative plans"

BJ's also stated it has a "deep pipeline" of new menu items, recently enhanced its loyalty program, and will implement additional productivity initiatives throughout 2017.

"Taken together," added BJ's Restaurants CEO Greg Trojan, "we believe this to be one of our strongest-ever sales initiative plans."

On imitation and flattery

But as I hinted earlier -- and for better or worse -- BJ's Restaurants' plan isn't exactly unique.

It was almost exactly three years ago, for example, when Buffalo Wild Wings first announced it would roll out tabletop tablets at each of its more than 1,000 North American locations (a number that has grown to more than 1,200 worldwide). Around the same time, Buffalo Wild Wings began early tests of its own mobile ordering and payment solutions.

What's more, Buffalo Wild Wings already started testing delivery service for select locations last summer, a move management noted was made after an analyst survey revealed the chain ranked as one of the top companies from which consumers wanted food delivered.

More recently, last quarter Buffalo Wild Wings also implemented a major refresh of its own mobile app, giving loyal customers the ability to save past orders and menu favorites, as well as to receive offers tailored to their personal preferences. Online ordering also grew to 19% of Buffalo Wild Wings' takeout orders at company-owned restaurants in the fourth quarter, up from 12% in the same year-ago period. And speaking of loyalty, Buffalo Wild Wings' new Blazin' rewards program has already been rolled out in 25% of all U.S. locations, and typically results in a 2% boost to same-store sales following its initial rollout.

Meanwhile, Buffalo Wild Wings' menu innovation efforts have already begun to yield fruit by diversifying its offerings away from its namesake menu item, including a new "hand-smashed" burger platform that has increased burger sales by 25% since its launch last October. On top of that, Buffalo Wild Wings has seen strong initial boosts to traffic from value-oriented promotions like FastBreak lunch and Half-Price Wing Tuesdays, both of which were introduced in the middle of last year.

To be fair, Buffalo Wild Wings is still coming off four straight quarters of negative same-store despite its intensive efforts to innovate and diversify its dining experience, which goes to show just how difficult it is to navigate today's restaurant business environment. Nonetheless, Buffalo Wild Wings insists the collective contributions of these programs will yield fruit soon, helping it return to positive same-store sales growth by the end of 2017.

That also raises the question: Is BJ's Restaurants consciously following Buffalo Wild Wings' proven blueprint for success? And perhaps more important, will that blueprint be as effective when consumers have already seen it executed in a significantly larger, arguably more popular nationwide restaurant concept?

For now, investors will need to hurry up and wait for the answers to those questions. But in the meantime, you can be sure I'll be watching closely to measure the success of both BJ's Restaurants and Buffalo Wild Wings going forward.