Please ensure Javascript is enabled for purposes of website accessibility
Log In Help Join The Motley Fool
Free Article Join Over 1 Million Premium Members And Get More In-Depth Stock Guidance and Research
By Tyler Crowe - Mar 7, 2017 at 8:48AM

The oil refiner made a big acquisition in 2016. Now it needs to make sure it is properly integrated.

Making a good acquisition is much harder than it looks. Not only does a company have to buy assets that are a good strategic fit, but it also has to buy them at a decent price. HollyFrontier (HFC) made a major acquisition last year, and based on the purchase price, the company did well. Based on management's statements, this coming year is going to be all about making sure that these assets can be properly incorporated into the company's strategy.

Here's a quick look at some quotes from HollyFrontier's most recent call that show what management is thinking heading into 2017 and how the company plans to address some of the strengths and weaknesses in its business portfolio. 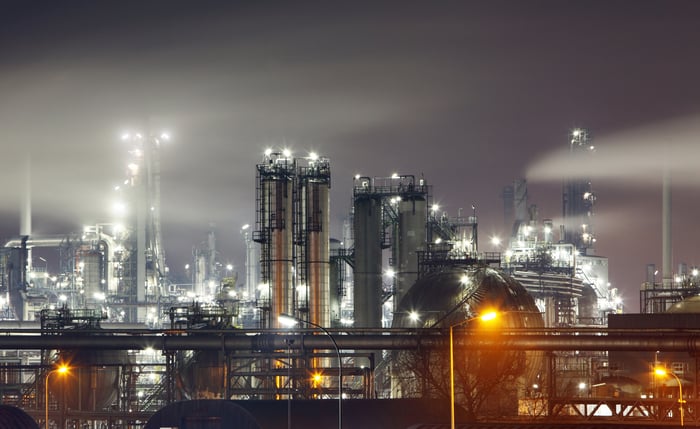 As has been the case with every refining company chief executive recently, HollyFrontier CEO George Damiris gave his two cents on what he expects from the new Trump administration and what that will mean for the company in 2017 and perhaps beyond.

Our outlook for 2017 remains cautiously optimistic. We are encouraged by the new administration's energy plan, its pro-growth economic policies and our potential to increase domestic crude production and demand for refined products. Combined with recent indications of compliance with supposed booked tax deduction cuts, these impacts should drive the reemergence of inland crude differentials and improve crack spreads. We are also optimistic that the flaws inevitably inherent with the RFS will be addressed.

If only one or two of these things were to happen, that would be a win for the company. To see all of these actions go through in 2017, however, seems a bit overly optimistic. One thing that Damiris didn't dwell on much was refining margins, which continue to remain weak. While some other refiners have said they expect margins to pick up in the second half of the year, others have been less optimistic as inventories of refined product across the U.S. continue to build even as several refineries are down for planned maintenance.

Showing off our new toy

A few weeks prior to the conference call, HollyFrontier took possession of its most recent acquisition: a 15,000-barrel-per-day lubricant facility in Ontario from Suncor Energy. While it has only been part of the company for a little while, Damiris' statement showed that expanding its lubricants business and changing the product mix could lead to some significant changes.

[Petro-Canada Lubricants, (PCLI)] is a transformative acquisition that advances our long-term vision and strategy and adds diversity to our earnings stream by providing a differentiated high-margin business that generates more stable cash flows. Combined with our existing Tulsa specialty lubricants business, it creates scale, operational and financial synergies and a strong platform for growth. Although the current refining environment is challenging, HollyFrontier is well positioned with a strong balance sheet, excellent liquidity position and the additional stable cash flow from our lubricants business.

One example that Damiris mentioned later in the call was the change between different types of lubricants. For example, changing the product mix from Group II to Group III class lubricants (higher viscosity oil that can stand a wider range of operating temperatures) means that the company can realize an $80-per-barrel increase in the price of refined products. Damiris ha already said he expects to shift both its Ontario and Tulsa lubricant facilities to produce more Group III oils.

Producers aren't the only ones touting the power of the Permian

The hot topic for producers recently has been to talk about their positions in the Permian Basin. It is proving to be some of the most economical wells in shale oil and gas drilling, and the large amount of legacy infrastructure in place from decades of drilling in the region makes it cheaper to move product to refineries and markets. Producers aren't the only ones touting the benefits of the Permian, though. Damiris pointed out that HollyFrontier's position in the Permian is going to look more and more attractive as production from the region ramps up:

On the Permian, we're seeing the rig count and the production levels increasing. If there's any secret there, a lot of that is in the counties that are right around our Artesia and Lovington refineries, so we're pleased to see that increased production. So that presents opportunities for both our refinery in Artesia, New Mexico as well as [subsidiary partnership Holly Energy Partners (HEP 1.33%)] to participate in the midstream business around those assets. Having said that, there's still a lot of pipeline capacity out of the Permian to the Gulf Coast, who is going to take a significant continued increased production to fill up those pipelines to lead to widening crude differentials between Midland and, say, Cushing or the Gulf Coast.

For several years, the Rocky Mountain region was HollyFrontier's most profitable refining segments, but it has fallen on harder times. A large part of it has to do with crude differential pricing. Basically, how much it costs a producer to sell to a refiner that is close versus one that is further away. According to Damiris, this region was once where the crude price differential was wide -- an advantage to local refiners -- but that has changed as of late:

The biggest structural change in the Rockies is on the crude side again. $50 crude is obviously less production than a $100 crude. You see that across the entire domestic E&P sector, but you especially feel it in the Rockies. So we've seen significant contractions and narrowing of crude differential there. And that's the biggest change in the second half of last year is that the crude dip that we typically enjoyed at Cheyenne and especially at Woods Cross, has narrowed significantly in the last few months.

The largest factor for those crude pricing differentials was the fact that too many producers were trying to move oil and gas through a limited amount of space in pipelines. With production levels down and infrastructure capacity up, though, that advantage is slipping away and is looking harder to recapture. So when asked again on how to improve profitability for its currently weakest refinery (Cheyenne) now that the game has changed, here's what Damiris had to say:

[W]e have some fixed costs that we need to drive out of the system, maintenance being the biggest one. But we also have a series of other smaller targeted cost-reduction efforts, water consumption being one that I can highlight. But the biggest opportunity we have in the Rockies is getting throughput up. That's been our biggest challenge at Cheyenne. That refinery is rated at 50,000 barrels per day. It's actually 52,000, but it's tough for us to run at crude capacity. The downstream hasn't matched up that rate. But there's no reason we shouldn't be able to run that facility in the high 40s, 47,000, 48,000. So we have reliability initiatives in place to go get that, invest in strength in coke handling, sulfur handling that we're addressing as well allowed us to not only increase the throughput but also increase the percentage of WCS [Western Canadian Select crude oil] we run at that facility, which gets to your gross margin question. But when you look at gross margin, that's our biggest ability to influence. It is the crude part of the equation. The product markets review what the product market is. So the big lever there is increasing our WCS percentage and our crude slate at Cheyenne.

Of course, every analyst and investor wants to know what is next. Is HollyFrontier looking to stay active in the merger and acquisition front or is it planning some big organic investment opportunities? According to Damiris, 2017 is probably going to be a quiet year as the company wants to make sure that incorporating its most recent purchase goes as smoothly as possible:

[P]robably '17 is going to be very focused on integrating and making the improvements we anticipate and capturing the synergies with PCLI. So we're still going to be looking for other opportunities, but our primary focus, again, is going to be on PCLI. It's obviously a huge acquisition for us. We think there's tremendous potential to integrate that with Tulsa and to use that full platform for growth. There are other opportunities that we're still looking at, both in Refining and in -- and for HEP, especially in the Permian. But far and away, our biggest priority is PCLI this year.

Mergers and acquisitions are always a challenging way to grow a business. All too often they are capital-killing endeavors. So it's reassuring that the company is putting so much focus into this one thing rather than trying to move onto the next already. This kind of conservative approach is what has allowed HollyFrontier to maintain high rates of return. Keeping that mind-set should bode well for the company.