I still don't have my car back. 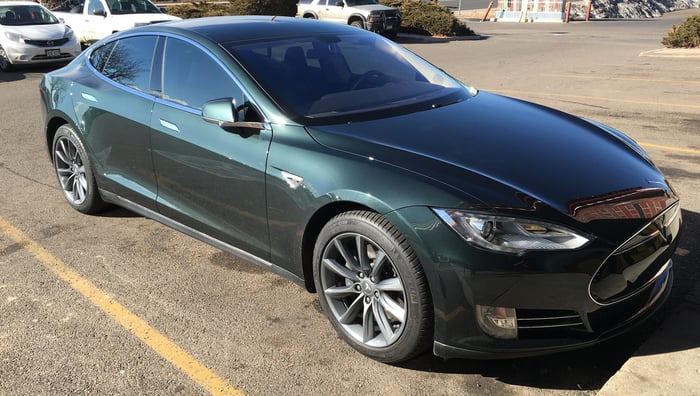 My Model S, shortly before the accident. Image source: Author.

You may assume that my car was involved in some sort of catastrophic collision that would require hours upon hours of labor to repair. Nope. It was a run-of-the-mill accident (more details later). Tesla is predominantly responsible for why it is taking so long, because out of those eight months, over five of them have been spent doing nothing but waiting for parts.

Let me back up a bit and start from the beginning.

In late 2015, my wife and I decided to take the plunge and buy a Model S. We had been longtime supporters of, and investors in, the company, first buying shares in 2011. We finally pulled the trigger in December of that year. In order to save quite a bit of money, we opted for a certified pre-owned (CPO) model, which cost about a third less than a comparably equipped new Model S.

At the time, the Colorado state tax credit ($6,000) for electric vehicles could be claimed on used vehicles, provided the car had never been registered in the state. (The state credit was recently amended to exclude used vehicles, effective starting 2017.) So we found one that was located in New Jersey, and even after paying the maximum transportation fee ($1,500), it still easily worked out in our favor. It was less than two years old and had less than 20,000 miles on it -- not bad for what we saved by going CPO. It was even the exact same shade of dark green as my first car, a color option that had since been discontinued -- bonus nostalgia points. 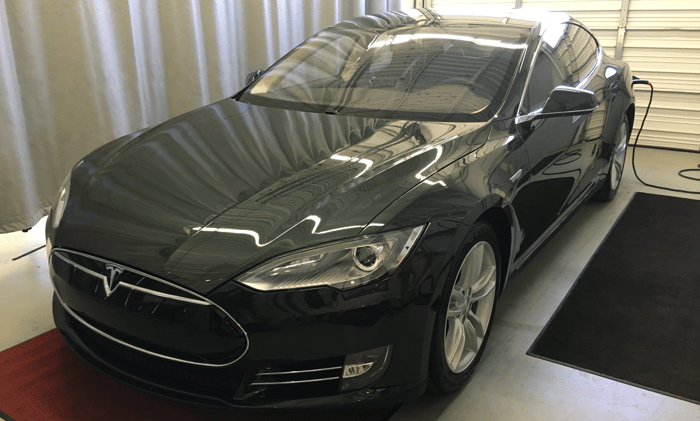 It took about a month for the car to arrive, but we immediately fell in love with it. We started taking road trips more often (within the bounds of the Supercharger network, of course), and frequently found excuses just to drive and enjoy the instant torque.

Like most Tesla customers, we became involuntary but not unwilling advocates for the company, fielding a constant string of questions from friends, family, and strangers regarding how the car worked and what sort of behavioral adjustments one has to make when going all-electric. We also attracted the typical confounded stares when we'd put something in the "frunk" or put the kids in the rear-facing seats that we had Tesla retrofit post-delivery.

A couple of months after taking delivery, we placed a reservation for a Model 3 on March 31, the day that Tesla unveiled the vehicle and started taking deposits.

I was actually at the Tesla factory in Fremont, California, when the accident occurred (I worked for Tesla very briefly during the summer of 2016). My wife called me frantically, exasperated that she had been involved in an accident. Most importantly, she was largely unharmed -- just some minor whiplash that she quickly recovered from. She was more concerned that the car had been injured. She had been driving home from work, sitting stationary at a stop light, when a young driver failed to hit the brakes in time and rear-ended the vehicle at a relatively low speed.

Here's the picture I asked her to take of the car immediately after the impact: It looks worse than it was, in part because the Model S and Model X contain more aluminum than most vehicles. Aluminum crumples much easier than steel, as it's a softer metal. This is also an important safety feature, as the crumple zones are larger and can absorb more impact, with the downside being that aluminum is more expensive. A consequence is that Tesla accidents look really bad because the vehicles get mangled, but the functional benefit is minimal intrusion into the passenger cabin.

Less than six months after we had taken delivery, our Model S was off to the shop.

While Tesla performs most routine service itself, it outsources major body work to a network of third-party body shops that are certified by Tesla. The certification process is expensive and time-consuming, but certified body shops will garner most of the local business (there is only one certified body shop in my immediate area).

Shortly after receiving my damaged car, the body shop started tearing down the vehicle to assess the damage and ordering the parts that would be necessary for the repair. The vast majority of the repair time has been gobbled up here. I had heard and read stories about Tesla parts taking longer to deliver relative to the rest of the industry, but that's expected for a young car company with just one factory. Anecdotally, stories about waiting two to three months for Tesla to deliver parts are not uncommon. After three months had passed and the body shop had still not received all the necessary parts, we began reaching out to Tesla directly through their customer service channels, which serve as a liaison to the internal parts department. Initially, no customer service representative that we interacted with was willing to take ownership of our issue. We kept getting passed between representatives with little to no useful information (a customer service manager eventually took ownership of handling our issue after repeated escalations). Parts had started to trickle in, but there still weren't enough to start the repair, so our car continued to sit idly. Two of the more pertinent parts were a rear lift gate and rear quarter panel, which were still outstanding. During one of the escalations in November (four months after the accident), Tesla guaranteed us that all parts would arrive at the body shop no later than the last week of November. They didn't.

In mid-December, the shop finally received enough parts to start working on the car (but not all of them). At that point, the holidays were nearly upon us, and every industry slows down around that time of year. The body shop would begin the repair in early January 2017 after the holidays. There were still a few outstanding parts, including bulb rivets. I would think that something as basic as rivets would be among the easier parts to deliver, but evidently I'm wrong (and not alone). We again contacted customer service, and Tesla again assured us they had just shipped the remaining parts for overnight delivery. Frankly, we didn't have much faith at this point, as we had been told this before. But in the final week of January, the shop confirmed that they had indeed received all remaining parts necessary to complete the repair. It looked like light at the end of the tunnel, six months in. At this point in the story, the car has spent more time in the shop than in our possession.

A couple weeks ago, the body shop updated us that the car was about to enter the paint shop, at which point it should only take a couple more weeks to reassemble the painted pieces and then perform electronics calibrations and a few other outstanding items. It turns out that the 12V battery is also now in need of replacement, as it will no longer hold a charge (perhaps this is related to how long the car has been sitting idle?). The shop ordered the battery a week and a half ago. Tesla uses exactly one specific supplier for its 12V batteries, which is struggling to keep up with Tesla's demands. We're now looking at yet another delay for the 12V battery, which is a part that most people are able to purchase for their vehicles locally within 15 minutes.

As soon as Tesla delivers this battery, the car will be ready within a day or two. It's supposed to be ready this week, but at this point I have incredibly low expectations, as we are again waiting on Tesla to deliver.

Tesla is known for having a generous loaner policy when vehicles are being serviced, but sadly this policy does not apply to body work.

The driver that hit us was uninsured, so we had to file our claims through our collision coverage, and we have coverage for a rental. But our rental coverage maxes out at 45 days, which is typically sufficient time for most body repairs. Having already known that our repair would probably take at least two months, I knew we would need to arrange alternative transportation. Even if we opted to use our insurance company's negotiated rental rates, it would cost approximately $1,000 per month to rent a car. That's in addition to the monthly loan payments that we are still paying.

Fortunately, my parents are retired, and as such have little need for their cars. My mother graciously agreed to let me borrow her car as long as needed, which relieved us of having to bleed out a small fortune ($7,000 by now) in rental fees for an indefinite period of time.

What this says about Tesla

This experience has profoundly shaken our faith in Tesla as a company and an investment. Thus far, Tesla has not given us a reason as to why our parts were so severely delayed, so we have no indication as to whether or not this is a one-off exception or if there is some systemic problem within Tesla's parts operations. While we've been waiting, Tesla has delivered tens of thousands of vehicles, including about 29,000 Model S sedans.

Some of Tesla's weakness here is certainly related to its ability to produce parts, which continues to improve every month. Theoretically, parts production should accelerate as Tesla continues to ramp its overall manufacturing capacity. That said, it seems like supply constraints can't be the only problem here. I'm fairly confident that my case is an outlier, but even if it is, it's still disconcerting that situations like this can slip through the cracks after repeated escalations and assurances. We're now questioning our Model 3 reservation, though we have a few months to make up our minds.

Our experience also calls into question Tesla's ability to support its existing customer base, which is a critical indication of whether or not Tesla can support a massively larger customer base. The company is still targeting 500,000 units in 2018. As many analysts and pundits point out, the enthusiastic early adopters may be willing to forgive this sort of thing, but the mainstream is a different story.