Please ensure Javascript is enabled for purposes of website accessibility
Log In Help Join The Motley Fool
Free Article Join Over 1 Million Premium Members And Get More In-Depth Stock Guidance and Research
By Travis Hoium - Mar 7, 2017 at 8:54AM

Merger speculation sent the toothpaste giant higher, but the pop in shares may not last.

Shares of toothpaste giant Colgate-Palmolive Company (CL 0.99%) jumped 13% in February, according to data provided by S&P Global Market Intelligence, as merger speculation ran rampant in the market. And it didn't even directly involve Colgate-Palmolive.

Kraft Heinz has made a play for Unilever, offering $143 billion for the consumer staple company. But the offer was rebuffed, and investors started looking for other companies Kraft Heinz may want to add to its growing portfolio. 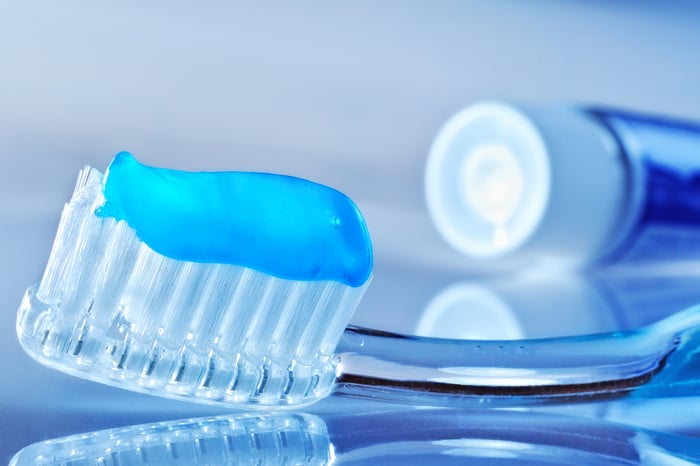 Not coincidentally, Colgate-Palmolive shares started rising just as any deal between Kraft and Unilever fell apart. Traders were certainly thinking the two companies would work well together, driving shares higher short-term. But this is really speculation more than anything fundamentally driving shares higher right now.

The pop in Colgate-Palmolive shares is certainly welcome for investors, but it has pushed the stock to a very lofty valuation. Shares are trading at 27 times trailing earnings with a 2.1% dividend yield, and that's for a company that's seeing revenue contract year over year. While speculation about a potential buyout can drive a stock higher short term, the pop can fade if a deal doesn't come to fruition.

Given the fact that Colgate-Palmolive is already a high margin company, I don't see how Kraft Heinz and its backer 3G Capital could come in and dramatically cut costs to make the deal profitable for themselves. So this might not be the best consumer staple target. And unless they start approaching Colgate-Palmolive's management about a potential deal, shares may slide, and with such a lofty valuation this is a stock I wouldn't get too bullish on given the deteriorating top line and volume trends.