There are several things about Pfizer (NYSE:PFE) stock for investors to like. Its dividend is a biggie. The potential for growth from products such as Ibrance and Xeljanz definitely makes the list. So does growth-driving newer drugs like Eucrisa.

But what about Pfizer's essential health business segment? This business might seem boring compared to the company's innovative health segment, which claims those exciting products mentioned above and plenty more. However, there's a lot for investors to like in this often-overlooked part of Pfizer. Here's why. 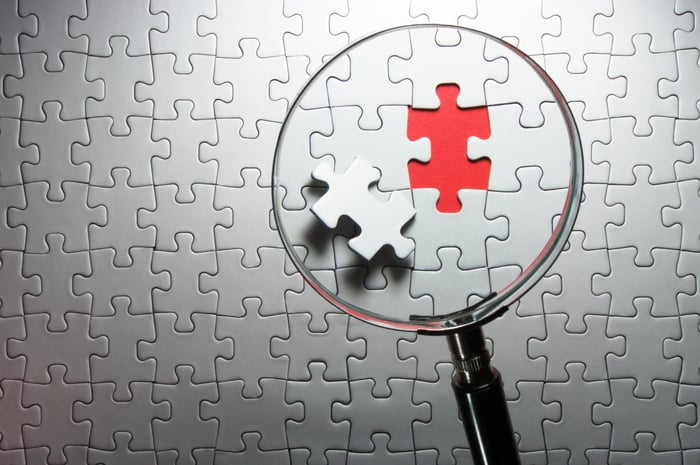 If you like Pfizer's dividend (and who doesn't?), you can thank the company's essential health segment for funding much of it. Last year, the segment generated revenue of $23.6 billion -- nearly 45% of Pfizer's total revenue.

We could look at this income figure in another way. Pfizer's operating cash flow in 2016 was $15.9 billion. Without the essential health business, that figure would have been much lower. And it's quite possible, the dividend would have been lower, too.

Biosimilars comprise the fastest-growing part of Pfizer's essential health business. Revenue from biosimilars more than quintupled in 2016 from the prior year. Granted, it's still a small part of the business. However, biosimilars should play an increasingly more important role for Pfizer in the future.

Success so far has stemmed from Inflectra, Pfizer's biosimilar to Johnson & Johnson's (NYSE:JNJ) Remicade. Inflectra launched in the U.S. in October of last year and entered the European market (under the brand name Remsima) in 2015.

Johnson & Johnson is putting up a fight, however. The healthcare giant termed Pfizer's introduction of Inflectra as an "at-risk launch." J&J is challenging Pfizer in court over potential patent infringements and intends to compete through discounts, rebates, and other measures. That threat isn't stopping Pfizer from moving forward.

Pfizer also awaits regulatory approval for another biosimilar to Amgen's Epogen. In addition, the company's pipeline includes five late-stage candidates that are biosimilars to top-selling drugs.

Pfizer's essential health group president, John Young, recently stated that the global biosimilar market is projected to grow from just under $2 billion today to $15 billion by 2024. It's a significant opportunity for Pfizer.

Pfizer's 2015 acquisition of Hospira positions the company as a major player in the sterile injectables market. Last year, Pfizer's essential health segment made $6 billion in sales from sterile injectables. That figure seems likely to grow considerably.

The global market size for sterile injectables currently stands at around $80 billion. This market is projected to grow at an annual rate of 5% over the next several years. Pfizer should see more than its fair share of that growth.

Another key part of Pfizer's essential health segment is its anti-infectives business. Pfizer is the No. 1 anti-infective company in the world with $3.3 billion in sales last year.

The World Health Organization (WHO) has called anti-microbial resistance as one of the most serious threats to global health. This problem could be compounded by an aging global population that is more at risk of infections.

The essential health business won't ever be the growth driver for Pfizer that its innovative health segment is. However, there are several growth opportunities for essential health in multiple markets.

Most important for investors, Pfizer's essential health business should continue to generate solid cash flow. That translates to dividends and possible additional acquisitions to further Pfizer's growth more in the future.

1 Thing About Pfizer, Inc. Stock That You Might Be Overlooking @themotleyfool #stocks $PFE $JNJ Next Article
Current