It may not look like it based on U.S. Silica Holdings' (NYSE:SLCA) most recent earnings report, but there are signs that the frack sand industry will be facing another round of boom times starting very soon. Producers are headed back to the oil patch, and changes to the way they drill and complete wells bode very well for sand suppliers.

According to U.S. Silica's management, there is an immense opportunity to be had here, and it is planning to be the company to satisfy that need. Here are some quotes from its most recent conference call that highlight how it plans to tackle the industry's demands for 2017 and beyond. 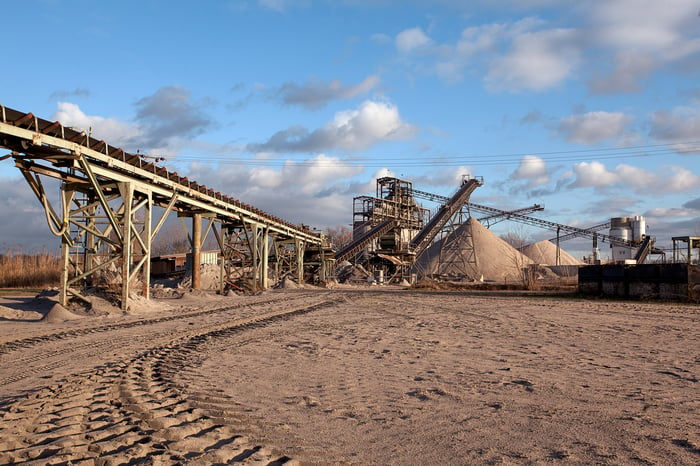 Showing off its new toys

Over the past year, U.S. Silica was one of the few frack sand companies that had the financial flexibility to make some strategic moves to expand its business and take market share. Now that the market is on the upswing, those investments are looking like they've been smart ones that could pay off well in the future. So CEO Bryan Shinn took a victory lap as he touted the benefits of its recent acquisitions:

We became a stronger company in 2016 by making the best balance sheet in the space even better through disciplined capital spending and by raising over $650 million by 2 successful public equity offerings. We used most of the proceeds from one of those offerings to extend our industry lead to 2 strategic, highly accretive acquisitions, NBR Sands and SandBox Logistics. NBR, now our Tyler [Texas sand mine] operation, has exceeded our initial expectations and has enabled us to take increased share in the growing market for regional frac sand.

SandBox, the leading containerized last-mile logistics solution, has also exceeded our initial expectations and continues to add new customers and grow market share, including being named last month by Halliburton (NYSE:HAL) as its preferred provider for containerized sand delivery. I'll talk more about the outlook for SandBox later in my prepared remarks.

Meeting the needs of the next upswing

Sales of sand are up, and based on industry trends, it looks like demand will continue to rise for some time. Demand is expected to grow so much that U.S. Silica believes there is an opportunity for a very large expansion of its current capacity. Shinn believes that the company could double its capacity for the oil and gas industry in the near future:

[W]e plan to have all of our oil and gas sand assets operating at maximum capacity in the near future. Second, over the next 12 to 18 months, we expect to invest in a mix of expansions at existing sites, new greenfield sites and acquisitions that will collectively approximately double our low-cost oil and gas production capacity to more than 20 million tons per year. Third, we'll make additional capital investments in SandBox this year. We continue to add new customers and expand existing customer relationships, and we're quickly ramping up capacity to meet the growing demand.

That much additional capacity actually spooked the market, because the last time we saw rapid expansion plans like that was just before the oil price collapse. As many have heard, the most dangerous phrase in investing is "it's different this time," but there are signs that sand demand will expand significantly. One thing that is underpinning this surge is that sand used per well has doubled in just about every major shale basin in the U.S., and in some instances, that per-well demand has more than tripled. With per-well sand demand increasing that much, it won't take as much of an increase in total wells drilled to get back to strong demand growth.

This isn't just speculative growth, either

Another fear from analysts and Wall Street is that U.S. Silica is making these big expansion plans on a hunch and some speculation that these trends on demand will continue on their current trajectory for a while. So when asked if this was the case, Shinn pointed out that it is getting an awful lot of inquiries for it to be a purely speculative move:

So we're definitely getting signals from our customer base. We've got a lot of ongoing discussions as you might imagine with customers. And they're sort of begging us to get this online faster, given the pace of demand increase right now. So I'm not worried about that part at all for the sort of technical aspects of getting all this done. And certainly, greenfields are less certain than the expansions and the M&A is less certain than the greenfields and the expansions. So back to my earlier comments, but certainly, we see strong interest in the market for these tons and for this strategy.

Logistics will be a big focus in 2017

The company has been highlighting its recent acquisition of SandBox quite a bit since it was purchased in the middle of last year. It even had its own breakout session at the company's analyst day meeting back in December. The ability to deliver sand the last mile to the well site and have an on-site system that reduces loading and unloading times has the potential to be a market differentiator as well as expand overall margins for the company.

Like U.S. Silica's plans to expand its production capacity, Shinn highlighted that the company is going to pour quite a bit of capital into SandBox in 2017:

we've decided to substantially expand SandBox in light of those market dynamics and just to kind of level set and take everybody back, when we bought the company -- bought SandBox back last year, they had 23 crews. About 18 of those were active. So that's kind of the baseline. We previously announced a $25 million CapEx expansion to essentially double the business going from 23 to 46 crews. That's going so well, and we expect that to be -- since they all sold out in the near future here, we've decided to double again, which will take us up to about 90 SandBox fleets. And I would expect that we will spend somewhere in the neighborhood of $35 million or $40 million this year to bring those additional fleets online. And our expectation is, as I said in my prepared remarks, that we'd be up to 80 fleets or more in terms of equipment deployed by the end of 2017.

With so much demand growth hitting the industry lately, the valuations for sand mines and other frack sand assets have risen significantly. Also, the capital required to bring a new sand mine on line from scratch are high, but not that high when compared to other parts of the oil and gas industry. So when asked why even bother with mergers and acquisitions when valuations are high and new facilities are cheap, Shinn noted that plans for future M&A aren't at the top of the list, just on it:

When I think about bringing new capacity into the company, I like the fact that we have the optionality to expand existing mines, do greenfields or do M&A. And as we've done with SandBox and as we did with Tyler, I think, we'll try and cherry pick the very best opportunities. And where we find attractive assets at reasonable pricing, we won't hesitate to pull the trigger on that.

The benefits of adding the Tyler, Texas, mine and the SandBox logistics assets have been pretty clear. A greater presence in regional sand mining has allowed for lower transportation costs and quickly meeting the demand of regional customers, and improving logistics to lower delivery times and make that expensive last mile delivery are helping to grow the bottom line. So investors should think of future M&A from U.S. Silica as more of a strategic gain rather than a simple capacity gain.

Despite the tepid response from the market since U.S. Silica's earnings, the company looks to be headed in the right direction. With big plans for additional capacity and expanding its logistics footprint, investors should watch to see how they impact both revenue growth and margin expansion in 2017. Clearly, the opportunity is there. Now, U.S. Silica has to capture it the right way.