Please ensure Javascript is enabled for purposes of website accessibility
Log In Help Join The Motley Fool
Free Article Join Over 1 Million Premium Members And Get More In-Depth Stock Guidance and Research
By Daniel B. Kline - Updated Mar 8, 2017 at 4:04PM

The company has a new barrel-aged product that may be a sign of things to come.

After he steps down as Starbucks' (SBUX -0.05%) CEO, Howard Schultz plans to take on leadership of the company's Roastery and Reserve brands. The idea behind those upscale concepts is to once again redefine coffee consumption both in the United States and around the world. To do that, the company will be building Roastery locations in Shanghai and New York in 2017, followed by Tokyo in 2018. These roughly 25,000-square-foot coffee palaces will join the original Seattle Roastery in helping the company create higher-end coffee products.

The Roastery locations serve as part retail store, part invention lab, part roasting facility, and part supply hub serving the chain's to-be-launched Reserve store concept while also creating products for the broader Starbucks brand. That has led to innovations like cold brew, which is now standard fare at rivals including Dunkin' Brands (NASDAQ: DNKN), but the ultimate goal is to serve coffee connoisseurs.

The question -- and it's a big one -- is exactly how many people are willing to pay even more for a cup of coffee? Certainly some Dunkin', fast-food, and convenience-store java consumers already balk at paying Starbucks prices. Those folks certainly won't be consumers of even pricier coffee, but Schultz clearly believes there's a market for selling coffee like wine or fine whiskey, and the Seattle Roastery has a new product that shows at least a hint of the company's future direction as it pairs unroasted coffee beans with whiskey-barrel aging. 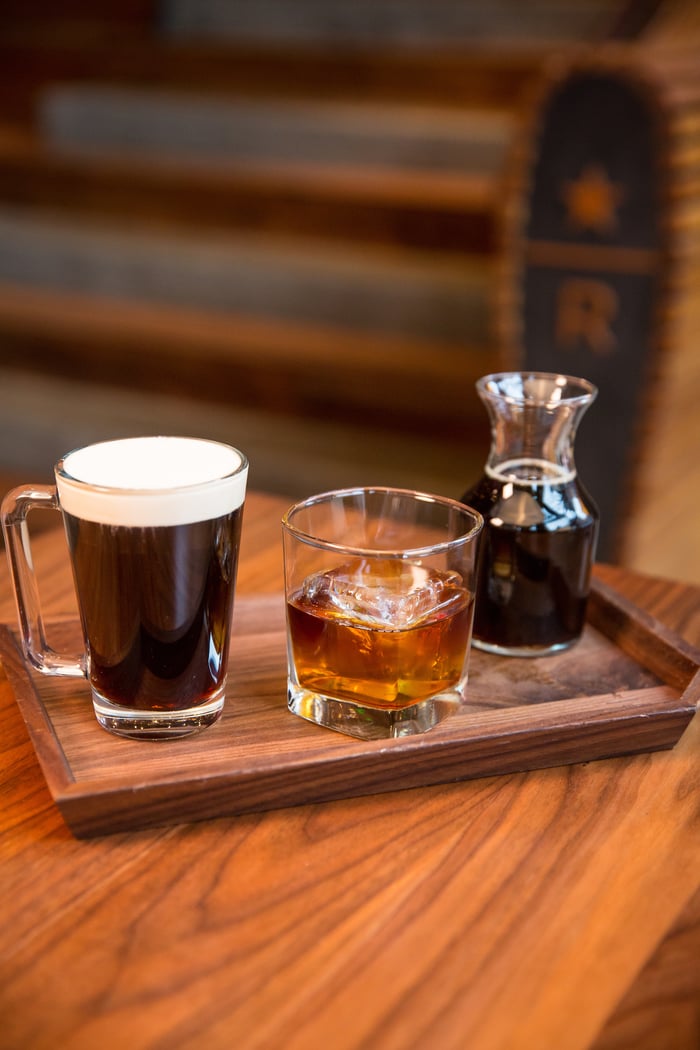 What did Starbucks introduce?

The coffee chain has released its first-ever barrel-aged coffee at the Seattle Roastery. The company uses techniques associated with whiskey and applied them to Starbucks' signature beverage.

"Exploring the potential of coffee and marrying nontraditional experiences and techniques together is something we're experimenting with daily," said research and development team member Duane Thompson in a press release. "We start with the bean first and go from there."

The chain's first barrel-aged effort, Starbucks Reserve Whiskey Barrel Aged Sulawesi, will be available for a limited time in two beverages (a cold brew and a hot beverage with vanilla and sugar) as well as in beans for brewing at home. An eight-ounce serving of either drink will cost $10, according to The Seattle Times. To put that price in perspective, a regular cold brew costs around $2.99 for a 12-ounce "tall" serving (prices vary by location).

How does barrel aging work?

Starbucks says it "starts with just a small 800-pound batch of green (unroasted) Starbucks Reserve Sulawesi beans hand-scooped into freshly emptied American Oak-Aged Whiskey Barrels from Woodinville Whiskey, Co. Over several weeks, the beans absorb the whiskey flavor. They are hand-rotated frequently to ensure all the coffee comes into contact with the oak barrel." After aging, the beans are roasted and the heat of the roaster burns off any remaining alcohol.

"The process takes time, care and patience, ensuring we deliver a distinct experience that stays true to the specialness of the coffee while imparting the complementary, distinguished flavor of the oak-aged barrel," Thompson said. "You get those earthy notes mingling with the oak to create a cup that's unlike any other."

In a select number of Roastery locations, it's easy to see Starbucks fans and coffee lovers paying more for a rare experience. Visiting these coffee palaces won't be an everyday event for most people and on special occasions, people are less careful with their wallets.

The challenge, and it's a major one, is whether Starbucks can build a sustainable model for the 1,000-plus Reserve stores it plans to open and the up-to-20% of its existing locations that will get a Reserve bar. Early results have been strong; the Seattle Roastery grew its sales 24% year-over-year in 2016 and produces checks that are on average four times larger than at a traditional location, according to Schultz.

Going from one destination location selling expensive coffee to a handful, to thousands represents a big leap. Starbucks has failed before -- its Evolution juice brand as a stand-alone store, Fizzio sodas, alcohol at night, to name three -- but this is a much bigger bet. Schultz has done this before as nobody thought Americans would pay $3, $4, or even more for coffee, but raising the bar again may be an even bigger challenge.