YouTube TV has a big advertising company behind it: Google.

YouTube recently announced its plans to offer a live television streaming service to compete with the likes of DirecTV Now, PlayStation Vue, Sling TV, and more traditional pay-TV operators. YouTube TV will include 40 live channels and will be initially available in select markets.

While YouTube TV is missing quite a few channels compared with competing services, it has the potential to attract a lot of attention from media companies in the future thanks to one huge advantage over the competitors: Google, the Alphabet ( GOOG 0.90% ) ( GOOGL 0.81% ) subsidiary and owner of YouTube, is one of the best digital video advertisers in the world. 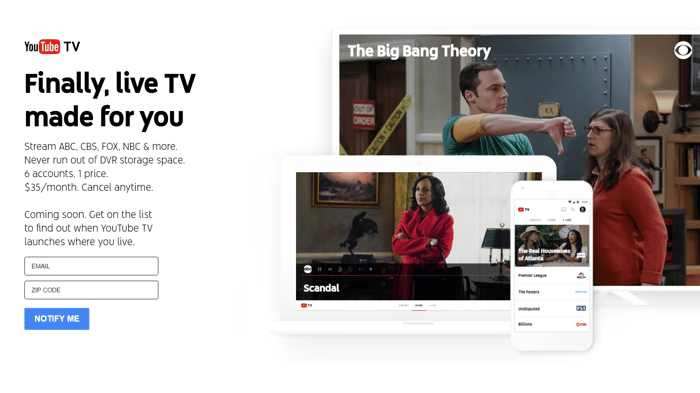 Disney ( DIS 2.84% ) CEO Bob Iger is actively trying to get his networks into digital skinny bundles. Indeed, Disney's networks, including ESPN, are available in the lowest-priced tiers of all of the aforementioned streaming services.

Importantly, Disney is not sacrificing any of its affiliate fees to get its channels into those tiers. "The per-channel fees, which we are not getting too specific about, are commensurate with what the fees are on the existing services," Iger said about its deal with DirecTV Now.

But there's an added benefit to going digital. "Some of the technology platforms will offer dynamic ad insertion. We think that that has got some real potential for the company," Iger told investors on the company's third-quarter earnings call last year.

Dynamic ad insertion allows media companies to serve targeted ads to viewers instead of using the one-size-fits-all system of traditional live broadcasts. YouTube TV may give media companies the opportunity to tap into Google's targeting data. On top of that, YouTube already has millions of advertisers on its platform, which it could tap for more premium YouTube TV ads.

Media companies might give YouTube TV a bigger break on affiliate fees if it can produce meaningfully higher ad revenue per viewer than its competitors.

YouTube will have a chance to prove itself, too

Media companies will handle the majority of their ad buying at the launch of YouTube TV, but YouTube will have access to about two minutes of ads for every hour of viewing. That's the ad inventory that every cable company receives. If YouTube can use its decade of advertising experience and produce outsize results, it could increase interest from media companies for its services.

That bit of advertising is about the only thing that will make YouTube TV profitable, as analysts estimate its affiliate fees total about $29 before accounting for various regional sports networks, which could add $4 to $5.

Suffice it to say YouTube TV has a lot running on that small slice of advertising inventory.

Taking on a $71 billion market

The market Google is going after with YouTube TV isn't so much the pay-TV market as it is the television advertising market. Google tried to break into the market before by partnering with media companies about a decade ago. Now, it's using YouTube TV as a platform to gain access to that inventory, which generated about $71 billion in the U.S. last year.

Getting YouTube TV off the ground and showing media companies what it's capable of with advertising is the first step. The more successful it is with its own ad inventory, the more likely it is to win the business of more media companies. In turn, more customers will sign up as the value improves and YouTube is able to bring on more networks.

If YouTube TV is successful, it will be because its superior advertising makes it a win-win-win -- the media companies, the consumers, and YouTube.

News Flash: YouTube's About to Leave Netflix in the Dust

How Did YouTube TV Add Half a Million Subscribers Last Quarter?