I had thought Gilead Sciences' hepatitis C franchise was pretty close to the bottom. 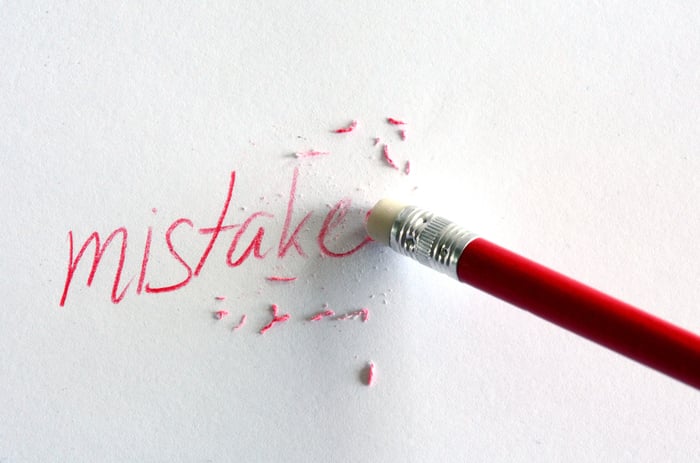 I can't erase my mistake -- but you can learn from it. Image source: Getty Images.

In healthcare, revenue boils down to two components: price and number of patients treated. Gilead has been getting hammered on both, although management expects Hep C drug Harvoni's U.S. prices to stabilize at roughly $15,000 per bottle in 2017, down from an initial list price of $94,500. Investors should be pleased to see that stabilization, as it comes after two years of Gilead pricing retreats under pressure from payers and competing drugs from AbbVie and Merck. Unfortunately for investors, patient volume is expected to continue declining as the patient pool skews increasingly toward healthy patients. Since hepatitis C is a slow-moving disease, these healthier patients have years before they're in serious danger -- years during which many insurers will likely delay getting them a cure in the hopes that prices will come down in the future.

Now, in all fairness to me (and other investors who felt similarly), we were in uncharted waters -- Gilead is selling a wonder drug that, in over 90% of cases, provides a cure for a disease that infects as many as 150 million people worldwide, according to the World Health Organization. This was the first time a really expensive drug was marketed for a common disease. Predicting the market dynamics was tough.

Nonetheless, I pretty clearly made a mistake: I didn't seriously consider what a significant erosion in the hepatitis C space would look like. I figured that things might decline by 20%, or even 25%, but a nearly 50% decline in 2017 didn't really figure into my calculations.

And it should have. I should have analyzed different potential scenarios and what I thought the stock might be worth under those scenarios.

How I learned from my mistake

I've decided to add a step to my investing process. From now on, I'll do a base/bull/bear framework. I'll make my best guess as to what a "reasonable" level of growth -- likely heavily anchored to past performance -- for a company will be over the next five years. And then I'll do predictions skewed heavily toward optimism and pessimism. For each of those three, I'll apply a valuation multiple based on what companies in similar circumstances have historically traded at -- and then consider the range of potential outcomes based on that.

Below I've made an example of what that might look like. (And while it's tangential to the point of this article, I'm happy to own Gilead stock at current prices with the framework I'm about to lay out.) I've made some assumptions (flat share count, similar margins, etc.) which are unlikely to remain true in the real world, but help reduce the number of variables in an already variable-heavy set of calculations. I'm not doing this to be lazy; rather, I'm trying to focus on the big picture so I don't get caught up in the trees and miss the forest.

At the 2016 Berkshire Hathaway annual shareholder meeting, Warren Buffett was asked why he does his own due diligence instead of having a whole team to look at every little detail. His response was telling: "[Our acquisition mistakes are] not about the specific labor contract, not a question of patents, not things you can find on a checklist for acquisitions. We've made half a dozen mistakes, but none could be cured by doing more due diligence. They're cured by us being a little smarter. Assessing whether managers [sic] who I hand a billion dollars to, and he hands me a stock certificate, assessing whether he will behave differently in the future than in the past. It's incredibly important. But no checklist in the world is going to tell us that."

Understanding the broad brushstroke of the industry and Gilead's opportunities and threats will make for a better investing decision than focusing on a bunch of extra (relatively small) numbers. Plus, all of that extra precision might give the illusion of accuracy. I don't expect any of these three scenarios to be accurate -- merely to define the edges of what could reasonably happen, based on what we know today.

In the bear case, I assume that hepatitis C revenue goes to zero, HIV revenue declines by 20% from last year (reflecting market-share losses to competitors, most notably GlaxoSmithKline's VIIV Healthcare), and that Gilead fails to get a single drug through its pipeline and do anything with its cash hoard (currently $32 billion). It freezes the dividend where it is, largely directing future cash flow to maintaining its dividend. The market assigns it a valuation of seven times earnings (pretty close to what Gilead currently commands) and largely leaves the company for dead. The pricing implies a 6% dividend yield, which is very high for healthcare -- but not unheard-of for no-growth companies (GlaxoSmithKline, for example, sports a roughly 5% yield even as the core business and growth prospects have steadily improved).

My base case is built around the core business declining further, largely offset by an acquisition (which Gilead has signaled it's very interested in completing). I assume hepatitis C revenue declines by more than 60% from where it's forecasted to be next year, as price concessions and market-share losses continue to undermine the business. HIV revenue increases by 5% annually as market-share gains by new drugs Genvoya, Odefsey, and Descovy are partially offset by Gilead losing patent protection and revenue of some older HIV drugs. Gilead uses its cash to make an acquisition, which boosts its non-HCV/non-HIV revenue appreciably, enough to get it back to nearly its current annual revenue and earnings-per-share (EPS) generation. The dividend continues to grow by 10% annually, and the market continues to value the company as a large value stock instead of a growth stock.

In the bull case, I assume that HCV revenue stabilizes next year, or shortly thereafter, HIV revenue improves more as Gilead's new HIV drugs actively seize market share and elbow out the competition, and that Gilead makes a transformative acquisition that broadens its pipeline. That, combined with some successes from internally sourced drugs, takes it to new highs. The company grows its dividend by 20% annually, and the market treats it as a growing large-cap pharma stock, valuing it at a higher multiple than the S&P 500.

It's never quite that simple

The answer, of course, is somewhere in between. Maybe HIV grows along the lines of the bull case, but hep C goes fully to zero. Maybe both fail, but Gilead makes a transformative acquisition or has some good news out of its NASH pipeline.

You get the idea. This isn't trying to predict the future, but rather trying to capture the range of possibilities and think through what could happen -- explicitly anchoring to past performance with the "base" case, and then comparing to the bull and bear cases.

Take this framework as a start. Adjust it to your investments and learning style. Think through the different risks, what your investment might be worth in different scenarios, and whether you're willing to accept the pricing implied by those outcomes.

Most importantly, remember that you're still going to be surprised and that the market won't do things to deliver nice, neat, precise prices that match your models. That's part of the fun of investing, after all.