The residential solar industry has changed rapidly over the past year, shifting from leases to loans and large installers to smaller shops across the country. And customers and installers are beginning to see the value of having higher-efficiency solar installed on their roofs.

Sunrun (NASDAQ:RUN) is bucking the industry's trends and doubling down on a model that may be falling by the wayside. It's also doing so with higher costs than any other big player in solar, which makes me wonder: Where is Sunrun headed? 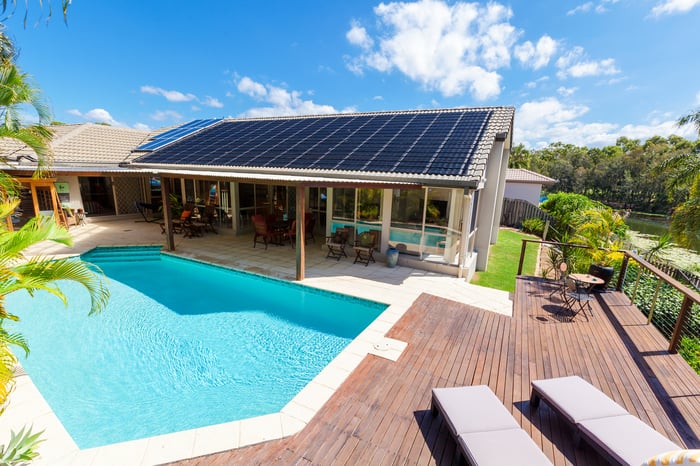 Behind the cost curve

One of the biggest challenges Sunrun faces long term is its own cost structure. In the recently reported fourth quarter of 2016, the company said costs per watt rose $0.05 sequentially to $3.41. This is well above Vivint Solar's (NYSE:VSLR) $2.85 cost in Q3 2016 and $2.89 for SolarCity's most recent cost report.

Even more concerning is that EnergySage has reported that the cost of buying a solar system from a small installer is now $3.57 per watt. This isn't the installer's cost, which is what Sunrun's $3.41 cost compares to. It's what customers actually pay. Sunrun isn't competitive with the market without the incredibly generous assumptions its management is making about lease value creation.

We also know that leases are essentially dying in the solar market. Two years ago, nearly three-quarters of residential solar systems were installed with leases and now that number is 47%, according to GTM Research. But Sunrun is doubling down on the lease.

In the fourth quarter, just 13% of sales were financed with cash and loans, similar to a year ago, and management isn't going to adapt to the industry's trend.

That's pretty much held and we do expect it to stay at around that rate going forward.

Even the assumptions management is making to show that its leases will be profitable are questionable. They project $1.00 in NPV for leases, but $0.61 of that is in the renewal 20 years from now. I've written at length about why it's ridiculous for solar companies to assume customers will renew a lease on 20-year-old solar panels at higher prices than they're paying today. Yet 61% of Sunrun's value creation is in that renewal.

The cost figures also exclude "initial direct costs paid prior to deployments," which amounted to $49 million in 2016 of amortization of intangible assets or stock-based compensation.

With $142 million of 2016 NPV of $213 tied up in a questionable renewal number and another $49 million in initial direct costs, the total value created evaporates very quickly. And then if we assume something higher than a 0% default rate or a discount rate higher than 6% (I would argue a discount rate of 8%-9% is appropriate given recent solar asset sales), the value creation turns negative very quickly. In fact, according to Sunrun, contracted assets fall $199 million in value if we increase the discount rate to 8% and use a 5% default rate.

What happens when the money stops flowing?

Not one of these challenges is going to single-handedly be a problem for Sunrun. But the company needs to keep a constant flow of funds coming in to stay in operation. If investors start demanding higher rates or customers move to other competitors because they don't want a lease, there could be significant problems for Sunrun.

I don't think Sunrun has positioned itself well for where the solar market is headed and is acting more like we're in the boom days of 2015. It's ignoring the changes in the market at its own peril.