For income-focused investors, the two companies below stand out for having among the highest-yielding stocks in their respective industries. However, they are also struggling to maintain enough earnings growth to sustain their now questionably high payout ratios, which could mean they'll be compelled to slash their payouts. Here's a look at each company, and what the future could hold for its dividend.

This toy maker isn't having so much fun

Toy maker Mattel (NASDAQ:MAT) has had a hard time lately. Its stock has fallen 25% in the last six months, while that of its main rival, Hasbro, (NASDAQ:HAS) has surged -- due in part to the popularity of its Disney princess line that was originally controlled by Mattel before Hasbro snagged the rights away from it. For 2016, Mattel's sales fell 4%, and earnings per share dropped 15% to $0.92 per share. 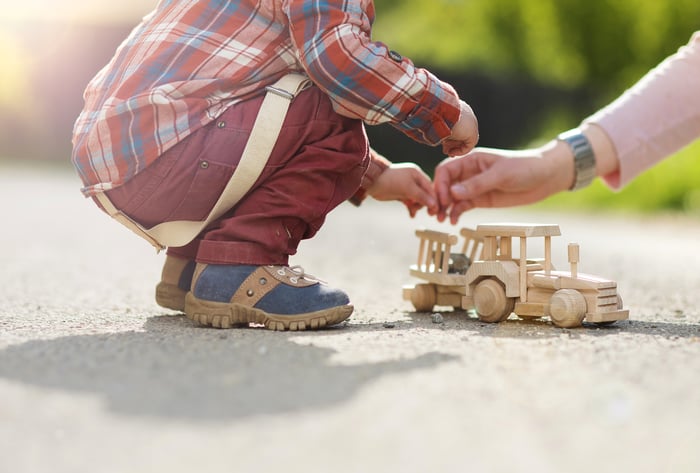 Regardless of those lackluster results, the company has kept its dividend payment steady, which -- thanks in part to a lower stock price -- means that the yield is now an impressive 5.9%. However, Mattel's total annual dividend payout of $1.52 per share, compared with earnings of $0.92 per share, means its payout ratio is a whopping 165% -- which looks unsustainable. The company would have to use debt to finance that payout if earnings don't pick up.

Analysts' average estimate is for a 36% rise in earnings per share this year, but that would still leave EPS less than the current dividend payout. Mattel thinks that it will see success in turning operations around in part by re-imagining its flagship Barbie brand with more diverse dolls, and in part via growth internationally, particularly in China. Still, the company has a burdensome debt load that must be attended to. That may take precedence over dividend payouts during the company's transition in the quarters and years to come.

Las Vegas Sands holds on despite others' cuts

Las Vegas Sands (NYSE:LVS), the gaming and entertainment company with resorts in Las Vegas, Pennsylvania, Singapore, and China's Macau territory, has also had a rough two years, but for very different reasons than Mattel. Rather than having a competitor eat its lunch, Las Vegas Sands suffered due to an industrywide drop following the implementation of stricter gaming regulations in Macau, and a series of crackdowns in China that drove that nation's wealthy and powerful to cut back on flashy gambling trips. Its name notwithstanding, its properties in Macau now provide the majority of Las Vegas Sands earnings.

Things seem to be turning around for the gaming industry and Las Vegas Sands now, but for  2016, the company still reported earnings of $2.10 per share, down from $2.47 in 2015. While earnings per share dropped, however, the dividend went up to $2.88 -- or 137% of earnings. Las Vegas Sands dividend yield -- now 5.5% -- become the highest in its industry after Wynn Resorts (NASDAQ:WYNN) dropped its payments by about two thirds following the slowdown in Macau that sent its earnings down drastically as well. Wynn's dividend yield now sits at around 2%.

Still, Las Vegas Sands has been vocal about its intent to continue prioritizing its dividend, and in the recent earnings release, it actually announced a small increase for 2017 to $2.92 per share ($0.73 per quarter). Said CEO Sheldon Adelson during the earnings call: "Recurring dividends are the cornerstone of our return of capital policy and we remain committed to increasing those recurring dividends in the future as our cash flows grow. Our industry leading cash flows, geographic diversity, and balance sheet strength enable us to continue our recurring dividend programs while retaining ample financial flexibility to invest for future growth and pursue new development opportunities."

Mattel and Las Vegas Sands have both said they believe their dividends are safe, and that they are in a position to continue paying them out while earnings grow. That could certainly be true. Additionally, dividends don't make up the entire investing scenario for any company, and many companies have cut their dividends as part of a total turnaround, which has then made the stock a better investment long term as the company used that money to assure long-term growth. Still, when dividends are cut, a negative market reaction usually follows, so expect these companies and their stock to experience some turmoil if they do in fact cut their dividends in 2017.