As investors and businesspeople, we've been fortunate enough to witness some of history's greatest rivalries. We've had Coca-Cola vs. Pepsi, Dunkin' Donuts vs. Starbucks, Nike vs. Under Armour, and Ford vs. General Motors, among many others. But there's a new business rivalry shaping up to be a great addition to that list: Uber vs. Lyft. Sadly, since both companies are privately owned, it's been tough to compare the metrics of the two ride-hailing majors. However, thanks to a recent survey, we now have a little insight about which company drivers prefer to drive for.

What the metrics show

For many passengers, the apps we use to hail a ride via smartphone are mostly interchangeable, but according to a survey conducted by The Rideshare Guy -- aka, Harry Campbell -- Lyft has the edge in terms of driver satisfaction.

"There's a lot of turnover in the rideshare industry, with half of all Uber drivers quitting after just one year, but for the ones that remain behind, more Uber drivers are satisfied than dissatisfied," wrote Campbell. "Of the 863 drivers who indicated they primarily drive for Uber, 49.4% agreed with the statement that they are 'satisfied with their Uber driving experience', while just 36.2% disagreed with that statement."

That figure pales in comparison to Lyft's 75.8% driver satisfaction rate, a result that aligns with Lyft's stereotype of being friendlier to drivers and consumers alike. 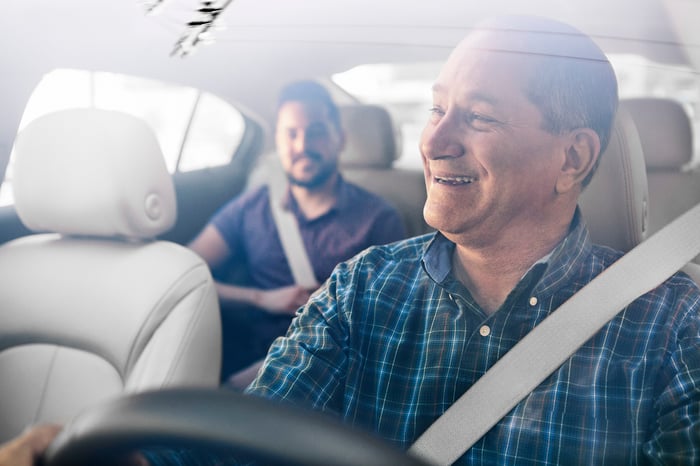 Part of the reason for Lyft's higher score could simply be its fatter paychecks. Per Campbell's survey, Lyft drivers are happier, higher paid and higher rated -- a clean sweep. More specifically, the survey showed Lyft drivers were averaging about $17.50 per hour, almost $2 an hour more than the reported Uber figure.

To be fair, despite Lyft leading in many of the survey's metrics, when it comes down to the bottom line, rideshare drivers are still primarily working for Uber. The survey found that 75% said they primarily drive for Uber, and 46% actually preferred to drive for Uber -- higher than the 41% who prefer to drive for Lyft.

Another factor behind Uber's poorer satisfaction rating could be UberPool, which was launched in 2015 and has created a few headaches for drivers with its pay structure and the added complexity of picking up and dropping off multiple riders per trip.

On the flip side, Lyft has an edge among passengers, too. It topped Uber in The Brand Keys' Customer Loyalty Engagement Index, which is designed to examine whose customers will demonstrate the highest levels of engagement and brand loyalty over the next 12 to 18 months. In a similar vein, here's a snippet from Lifehacker's Uber vs. Lyft pricing analysis.

"Peak hours change everything. Lyft's "Prime Time" pricing caps out at three times the normal base rate during peak hours. Uber's "Surge Pricing," however, can reach as high as eight times the base rate. Plus, we're willing to bet that if you're trying to head out on a Saturday night, or need a ride home from the bar after it's closed, you're going to run into surge pricing, just because, well, everyone else is looking for a ride too There are countless Surge horror stories out there about outrageous Uber bills, but if you search for stories around expensive Lyft rides, they're few and far between. Because of that and the pennies on the dollar you might save in some areas, Lyft is going to squeak by as the pricing winner."

Ultimately, Uber has pulled off a pretty incredible story. Founded only a few years ago, it's now valued at more than $60 billion, which is an unbelievable $10 billion more than Ford -- you know, that iconic Detroit automaker. It completely flipped the taxi cab industry on its head, and a company doesn't come that far that fast without rubbing a few people the wrong way. Love Uber or hate it, it's still the leader, despite many metrics showing people aren't entirely thrilled with it.