Please ensure Javascript is enabled for purposes of website accessibility
Log In Help Join The Motley Fool
Free Article Join Over 1 Million Premium Members And Get More In-Depth Stock Guidance and Research
By Matthew Frankel, CFP® - Mar 14, 2017 at 7:27AM

Here are five smart ways to make money from the rental housing boom.

Homeownership rates are the lowest they've been in a generation, and the trend toward more rental households isn't showing signs of slowing down. One smart way to invest in this is with residential real estate investment trusts, or REITs, which allow you to get the benefits of owning rental properties without the headaches that generally come with it. With that in mind, here are five top choices to help start your search.

Chart is author's own. Share prices and dividend yields current as of 3/10/17.

Why invest in residential REITs? 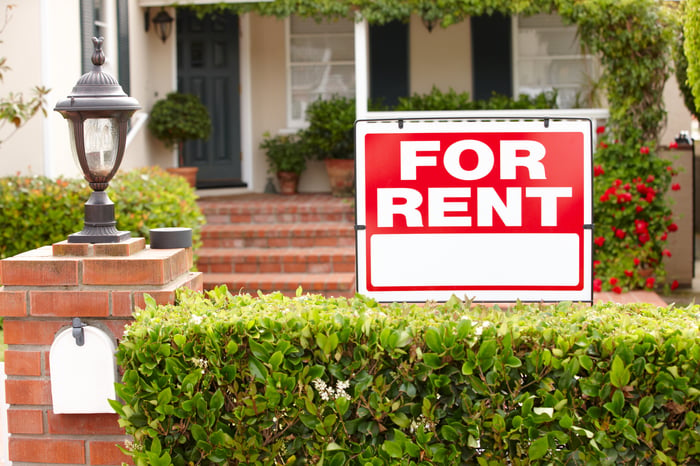 In a nutshell, we're becoming a nation of renters. More Americans are renting rather than buying homes than any time since 1965, and this trend is projected to continue. Urban population growth is expected to outpace suburban growth, which also points toward higher demand for rental properties.

Also, many residential REITs have been beaten down lately, thanks to the expectation of rising interest rates over the next few years. Without getting into too much detail, rising rates are generally bad for REIT stock prices, as they can create selling pressure as investors expect higher dividend yields from their stocks.

Finally, while rising rates are generally bad for REIT stock prices, they can be a very good thing for residential REITs. Specifically, when mortgage rates rise, home affordability falls, leading more people to rent. Now, I'm not saying that less-affordable homes are a good thing, but it does help to offset the effect of rising interest rates on these stocks.

Equity Residential (EQR -0.30%) is quite similar to AvalonBay. The two companies even focus on the same markets, which are rather unaffordable to many would-be homebuyers, as the median home price is 2.5 times the national average in these areas. And all of these markets have shown strong growth in new household formation, especially among the 25-34-year-old age group, the group most likely to rent.

As of this writing, Equity Residential has 302 apartment properties with about 76,500 apartment units. The company operates more efficiently than its peer group, with 17% lower overhead expense.

As the name implies, American Campus Communities (ACC 0.06%) specializes in student housing communities, with a focus on upscale communities that are within walking distance to campus. The market for student housing is still very fragmented -- American Campus Communities is the largest developer, manager, and owner of U.S. student housing, and has a market share of less than 5%. The company has said that it could potentially double this market share in the coming years, which translates to massive growth potential in an addressable market of more than six million college students.

In the wake of the financial crisis, and subsequent depressed housing market, an opportunity arose to purchase single-family rental properties at attractive prices, so naturally REITs started taking advantage. One such REIT is American Homes 4 Rent (AMH 1.85%), which owns more than 48,000 single-family properties in 22 states, and maintains an occupancy rate of nearly 95%. And as you may expect, the portfolio is concentrated in markets that were hard-hit by the housing meltdown, such as Houston and Phoenix, as well as markets with strong job and wage growth like Charlotte. American Homes 4 Rent manages its properties internally, which allows it to operate more efficiently than say, a real estate investor who owns a rental home or two.

Since the other two apartment REITs on this list are focused on high-barrier coastal markets, it may also be a good idea to check out Mid-America Apartment Communities (MAA 1.41%). This REIT invests in apartment properties in the Southeast and Southwest United States, and currently owns (either in full or partially) more than 101,000 apartment homes. Instead of focusing on markets where homes are simply unaffordable, Mid-America focuses on markets that aren't necessarily high-cost, but have strong job growth, such as Atlanta, Dallas, and Charlotte. And, the company's apartments are at price points that appeal to broad segments of the rental housing market, with 56% of the apartments renting for $1,250 or less.

This Dividend Stock Is Finally Recovering From the Pandemic