Please ensure Javascript is enabled for purposes of website accessibility
Log In Help Join The Motley Fool
Free Article Join Over 1 Million Premium Members And Get More In-Depth Stock Guidance and Research
By Matthew DiLallo - Mar 14, 2017 at 9:00AM

After several tries, Canadian pipeline giant finally found a solution that would work for gas producers in Western Canada.

TransCanada (TRP 1.25%) appears to be a firm believer in the old saying: "If at first you don't succeed, try, try again." That's evident by the fact that the company didn't give up after its last open season to get gas producers in Western Canada to sign up for capacity on its mainline pipeline failed. That persistence has now paid off, with TransCanada announcing a successful open season on that system this week.

TransCanada has been working with gas producers in Western Canada for the past several months to find a solution to fill up the capacity of its mainline system, which ships gas from production basins in the West to market centers in the East. That system currently transports 25% of the country's gas. However, it has been operating below its maximum capacity due to increasing supplies of U.S. shale gas in the Northeast. Those rising shale supplies put Western Canadian producers at a disadvantage to their U.S. counterparts because they had to pay higher transportation fees to ship their gas across the country, causing it to be uncompetitive in Eastern markets.

The falling volumes on the mainline system were one reason why earnings in its Canadian gas pipeline segment fell last year. The company has been working on a variety of solutions to address the issue, including working to boost earnings elsewhere to offset the declines in that segment. In fact, the company even took an "if you can't beat them, join them" approach by spending roughly $14 billion to acquire a growing U.S. gas pipeline business in the Northeast. 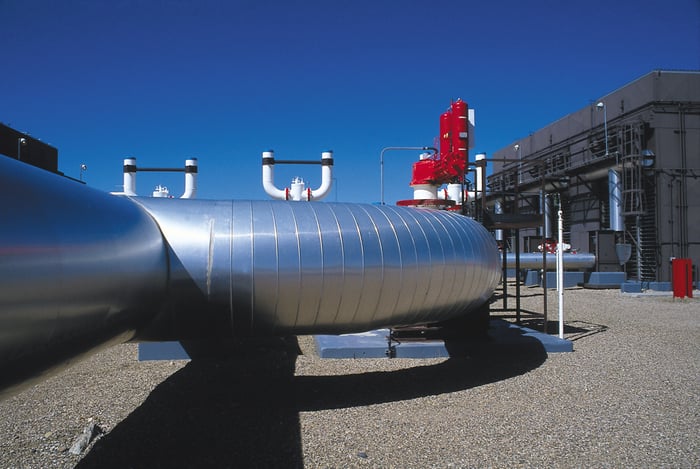 Despite working on several outside solutions to offset sagging income from the mainline pipeline, TransCanada never gave up on the search for a workable solution with large Western gas producers like Encana (OVV 5.90%) and Canadian Natural Resources (CNQ 1.53%) to fill up the system's capacity. Last fall, for example, it proposed a significant reduction in tolls for companies that signed up for a large block of capacity under a 10-year contract. However, even after cutting tolls down to between 75 Canadian cents per gigajoule and CA$0.82 per gigajoule -- about half the costs of other tolls -- that wasn't enough to get shippers to sign up for the capacity it needed to make the deal work. Encana's CEO, for example, said at the time that his company wanted rates as low as CA$0.70 per gigajoule before they'd commit to the capacity.

However, after talking with Encana, Canadian Natural Resources, and other shippers, TransCanada decided to come back with a simplified rate of CA$0.77 per gigajoule over a 10-year term for its latest open season. That rate, along with the option for an early termination of rights after five years, proved to be the winning combination because the company was able to get enough shippers to sign binding contracts to meet its minimum capacity requirement. That success is a big win for TransCanada because it can now utilize more of the existing capacity on the mainline system, meaning that most of the incremental revenue from these new contracts will flow to its bottom line.

The deal also represents a win for Western Canadian gas producers because their production will be more competitive versus low-cost output from the Marcellus and Utica shales. Because of that, companies like Encana and Canadian Natural Resources will now have a greater economic incentive to make investments that will increase their gas production in Western Canada.

While it took more than one try, TransCanada was able to maximize the value of its mainline system by finding a solution to lock up more of the capacity. While the company had to offer a significant discount to incentivize customers, it still wins out in the end because it will start collecting some incremental income on an underutilized system. Because of that, TransCanada will have more cash flow to support its dividend and finance its robust slate of growth projects.