A focus on research and development has enabled Applied Materials to stay ahead of the competition.

Applied Materials' (AMAT -5.18%) stock has popped more than 90% over the past 12 months, and investors may be wondering how likely the trend will continue.

While it's impossible to know, one thing we can look at to determine how Applied Materials might do is to examine its competitive advantage. In the semiconductor fabrication equipment space where it competes, the company's focus on strong research and development has put Applied Materials in a dominant position -- and there are no signs of that letting up. 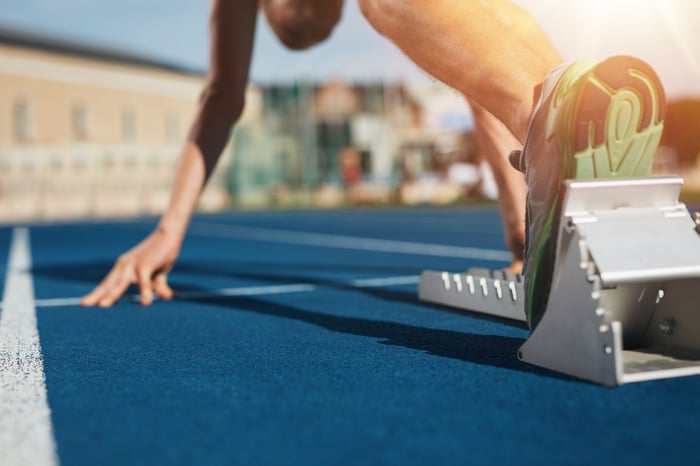 As the leading supplier of chip manufacturing equipment to companies around the world, Applied Materials has a lot of equipment design experience that its competitors simply don't have. Not only that, but the company spends a lot of money -- $1.5 billion last year -- to research and develop new equipment.

The company brought in $10.8 billion in sales in fiscal 2016, which means that Applied Materials spent about 13.8% of its revenues on R&D last year. To put that into context, Applied Materials has significantly outspent two of its biggest competitors -- Lam Research and ASML Holding -- over the past few years, and has been more consistent in its R&D spending than either company. Here's a look at each of the companies' R&D spending over the past few years: 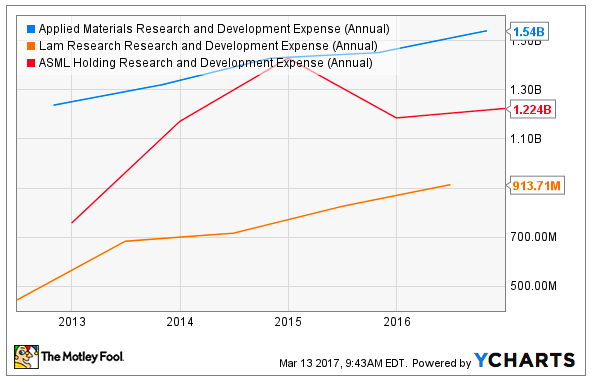 While ASML's spending came close to Applied's last year, ASML has been very inconsistent in its spending amounts over the past several years, which gives Applied Materials' consistent -- and higher -- spending the advantage. And while Lam Research grew its R&D spending consistently since 2012, it still falls well below Applied' Materials' spending.

Applied Materials' ability to outspend, and with more stability, its competitors has already helped the company to keep up with two key chip trends right now: 3D NAND and fin field-effect transistors (FinFET is a more efficient design for semiconductors). According to a recent Morningstar investment note, "... these segments have grown faster than the broader market in recent years and firms such as Applied Materials have directly benefited, as it can outspend smaller chip equipment firms in R&D to develop relevant solutions."

Applied Materials has mentioned this advantage as well. CEO Gary Dickerson said on the first-quarter 2017 earnings call that the company's expansion into 3D NAND (a type of memory chip process) increased the company's total available market "by a factor of three."

Applied Materials' ability to invest in new chip trends and provide new equipment for its customers becomes even more evident when you consider that 40% of the its current revenue comes from products that were introduced over the past three years. The company's smart R&D spending has help Applied Materials to amass 19.1% market share in the wafer-level manufacturing equipment segment.

Along with its dominance in this space, the company is also one of the leading semiconductor equipment and display suppliers in China. That's important because the country is expected to see a massive ramp-up in technology spending in 2018 and beyond.

On its most recent earnings call, Dickerson said that China will be one of the key drivers for long-term growth in both its semiconductor and display segments. Between 2015 and 2017, Applied Materials increased its semiconductor revenue two times over in China, and it expects that those revenues will be "up a significant amount" between 2017 and 2019.

Applied Materials focus on R&D spending in growing markets and its flourishing position in China's expanding semiconductor and display space are clearly giving the company an advantage over its competitors.

But Applied Materials also dominates the display and semiconductor manufacturing segment because it sells equipment for nearly every step of the fabrication process. This means that it's able to develop strong relationships with its customers for many of their important equipment needs and leaves little room for competitors to nuzzle their way in. If the company continues to spend on R&D and keep up with shifting semiconductor trends, then Applied Materials's optimistic future outlook may end up becoming a reality.