Why you can't go wrong with these bank, financial services, and utility dividend stocks.

You know how boring the healthiest food can sometimes be. It's a similar case with dividends stocks, where some of the most simple and most boring businesses have turned out to be dividend champions over the years. When it comes to dividend investing, slow and steady wins the race.

So when we asked some of our contributors to name such "boring" dividend stocks that they vouch for and believe are great picks for income investors, they came up with three really interesting names from two different industries for you to consider: Toronto Dominion Bank (TD 0.98%), H&R Block (HRB 4.11%), and NextEra Energy, Inc. (NEE 4.00%). North and south of the border

Reuben Gregg Brewer (Toronto Dominion Bank): During the 2007-2009 financially led recession, banking giants Bank of America and Citigroup lost money and drastically reduced their dividends. Toronto Dominion Bank, the only bank I own, remained solidly profitable and didn't cut its dividend. While Bank of America and Citi have been executing impressive turnarounds, TD Bank hasn't needed to -- it has, instead, been focused on growing its business.

Today TD is the sixth largest bank in North America by assets, with locations throughout Canada (its home market) and on the East Coast of the United States. It also owns around 40% of TD Ameritrade Holdings Corp.. It has a very conservative corporate culture that it actually spells out... and follows, as its impressive results during the financial meltdown shows.

But here's the fun part, TD Bank is already one of the 10 largest U.S. banks and it only operates on the East Coast! It's still growing its U.S. footprint, with a focus on top-notch customer service. Other banks are closing branches and automating client-facing jobs. TD really is a different kind of bank.

TD Bank currently offers a dividend yield of around 3.6% with an annualized growth rate of over 10% since 1995. While there's been a bit of excitement over reports of Wells Fargo-like sales tactics at TD, it's too soon to jump to conclusions. And, longer-term, the bank is likely to survive this issue, true or not, since banking relationships tend to be sticky. In other words, it looks to me like a buying opportunity.

How electricity and clean energy can mint you money

Neha Chamaria (NextEra Energy): There's hardly anything exciting about utilities, except that their regulated businesses and inelastic products and services allow most to pay out stable dividends regardless of the ups and downs of the business cycle. While there are many utility dividend stocks to choose from, NextEra Energy, Inc.'s focus on renewable energy has caught my attention.

With a customer base exceeding 5 million, NextEra Energy is among North America's largest electric power companies. While that ensures stable revenue and earnings as demand for electricity is pretty resilient, NextEra Energy is also one step ahead of competitors in terms of potential growth: Together with its affiliates, the company is the world's largest provider of solar and wind energy, and is among the largest nuclear power operators.

This could open up huge opportunities for NextEra Energy as the world shifts to cleaner energy sources in coming years. NextEra Energy is, in fact, already recognizing the opportunities, which is why it expects its adjusted earnings per share to grow at an annual compounded rate of 6% to 8% through 2020. That could translate into similar growth in dividends given that the company has traditionally increased its dividend in line with adjusted earnings. 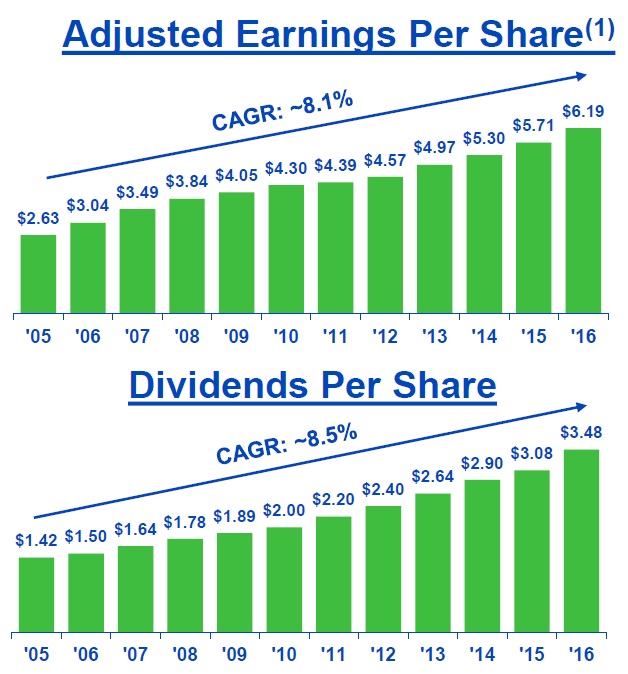 A dividend yield of 3% might not be top-notch, but the potential high-single-digit, or higher, percentage growth in NextEra Energy's dividends should more than make up for it. The stock is already up about 8% year to date, but I believe there's great upside potential for the long haul as it's still trading at under 10 times price to cash flow. More important, investors who bought NextEra Energy 10 years ago would have doubled their money by now on total return (capital appreciation plus dividend) basis, proving how dividends can make even a boring utility stock so lucrative.

Rich Smith (H&R Block): April is almost upon us, and that means it's tax time here in the U.S. Now, taxes aren't just an unpleasant topic of conversation. Filling out tax forms is also a deathly boring activity -- at least, it's boring unless you resort to creative accounting.

Then it could be fun at first, and then downright exciting (when the IRS comes knocking at your door).

Anyway, this time of year, if you ask me to name a "boring dividend stock," the first name that pops to mind is H&R Block. A leader in both in-person and do-it-yourself software-based income tax preparation, H&R Block is also a beautiful stock for dividend seekers.

At just under $4.3 billion in market capitalization, H&R Block stock earned more than $357 million in profits last year, which gives it a P/E ratio of only 13.8. For that price, you get a 4.3% annual dividend yield, and (according to analysts at least) a strong likelihood of 10% annual profits growth over the next five years. Thus, not only does H&R Block offer a dividend yield nearly twice as big as the current 2.25% yield on the S&P 500, but it also costs you only about half the S&P's average P/E of 26.7 to earn that yield.

Put those two numbers together, and this uber-boring stock could deliver 14.3% total returns to new investors, resulting in a beautiful, bargain-basement PEG (price/earnings to growth) ratio of less than 1.0.

Here's Why H&R Block Stock Is Down 20% Today