Please ensure Javascript is enabled for purposes of website accessibility
Log In Help Join The Motley Fool
Free Article Join Over 1 Million Premium Members And Get More In-Depth Stock Guidance and Research
By Travis Hoium – Updated Dec 13, 2017 at 1:48AM

If millions of EVs hit the roads in the next few years as planned, a massive increase in infrastructure is needed. Here's a look at the companies to watch.

173,941 electric vehicles (EVs) have been sold in the first eleven months of 2017 in the U.S., according to Inside EVs, but that's just scratching the surface of the industry's potential. Tesla (TSLA 4.42%) plans to build 500,000 EVs in 2018 and General Motors (GM 6.27%) has launched its first big bet on EVs in the Chevy Bolt, which will test the size of the market. With new cars from Nissan, Porsche, VW, Volvo, and many others, there looks to be an EV boom on the horizon. But the size of that boom is currently unknown.

The U.S. Energy Information Administration (which typically underestimates new technologies) predicts that annual EV and plug-in EV sales will be 1.3 million by 2025 and that 7.5 million EVs will be on the road by then. Meanwhile, GTM Research estimates that a total of 11.4 million EVs will be on the road in the U.S. by 2025 and Bloomberg New Energy Finance thinks 35% of all new vehicles sold in 2040 will be electric.

We know that the EV market will be big and that, given the scale of the numbers above and the speed of growth, EV charging infrastructure will become increasingly important across the country. That presents an opportunity for the companies building out these charging capabilities. 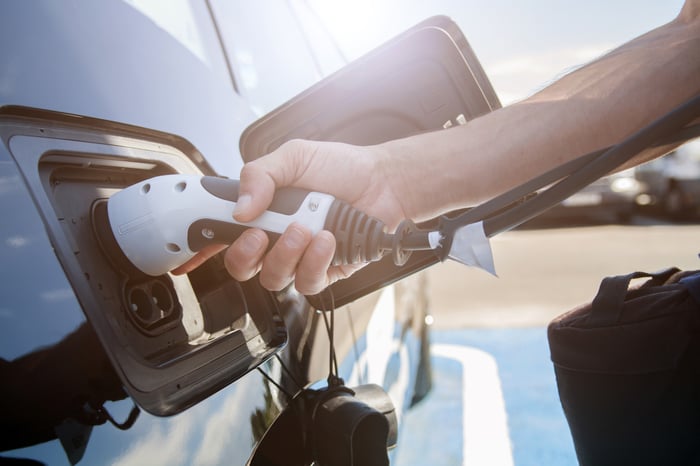 The chargers themselves could be big business

As EVs become more common, someone has to provide millions of chargers for personal and public use. Aerovironment (AVAV 2.19%) has taken a leading position in the charger market with partnerships with Volvo, Nissan, Ford, and others. The company has also released charging plans and session prices for Level 2 (12-26 miles of charge per hour) and fast charging (40 miles of charge in 10 minutes) on the West Coast, where it is building out a network. In the first six months of fiscal 2018, charger revenue was up 15.6% to $17.4 million, a small but growing base for a small company to build on.

General Electric (GE 4.95%) is also moving into the market, selling home chargers and public charging options. As it's a major electricity component supplier, this is an adjacent market it can enter with little risk, and I would expect to see GE's charger revenue grow as the market grows.

Of course, there's Tesla's charging infrastructure as well. Tesla sells most of its own charging components to customers, and as it's the biggest EV company, it's a big business. But the proprietary charging technology it has bet on may end up eventually walling it off from competitors.

How chargers get built

What's less known is who will build the charger infrastructure and how it will be paid for. Tesla's Supercharger network has been built out entirely by Tesla for the use of its own customers. It's been free for years, but now new Model S and Model X customers will get 400 kWh of supercharging free and then pay a fee for charging based on local electricity costs. Competing auto manufacturers haven't shown much interest in building out their own networks and will most likely let someone else build chargers. 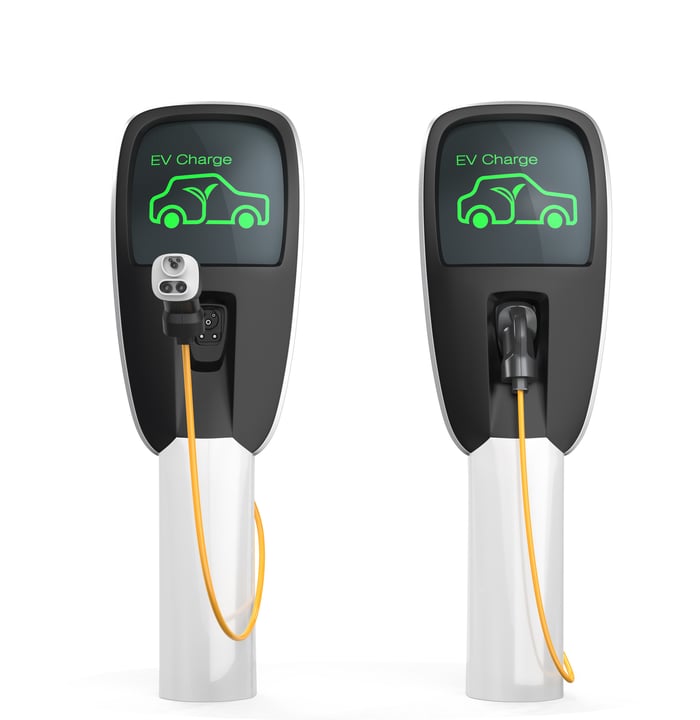 Utilities have shown some interest in chargers being a growth opportunity. In California, San Diego Gas & Electric is building 3,500 utility-owned chargers for $45 million, Southern California Edison is building 1,500 host-owned chargers for $22 million, and Pacific Gas & Electric is building the infrastructure behind 7,500 chargers in a utility-private investor partnership. The question here is whether or not utilities should be able to build chargers under their monopoly power and therefore rate-base the cost to all consumers, whether they own an electric vehicle or not. In theory, a utility's low cost of capital could help build out charger networks more quickly, although keeping utilities out of the market may bring in more innovative business models from private companies.

The third option is third-party charging networks. NRG Energy (NRG 3.06%) tried to get into this business but sold off EVgo earlier this year to an investment firm that may be able to grow the network more effectively. The national network now counts BMW, Ford, and Nissan as partners, and its early mover status may be helpful long term. ChargePoint is the nation's largest charging network, aggregating local EV charging stations into a national network. Blink is another company building a large network, which is currently about 4,000 stations.

EV charging will be big but still faces risks

What's unique here is that there are three distinct business models colliding in EV charging, and we don't know which one will win long term. My money would be on third-party networks eventually becoming victorious because of their national scope and ability to provide different charging technologies. And if they do, these (mostly private) networks and the companies that build the chargers will be the big winners for investors.

What we do know is that with millions of EVs expected to hit the road in the next decade, this is a big opportunity for companies that can get their business model right.