Here are three things you need to know about it. 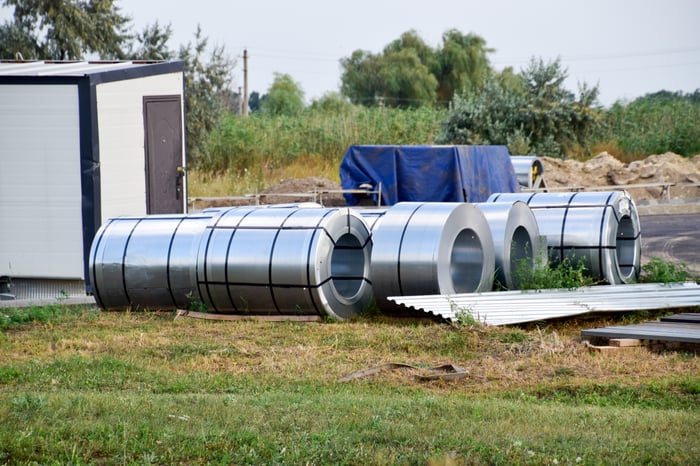 Profitless and down 13% in March, Carpenter shares may not look like much now -- but one analyst sees potential for Carpenter to build big profits. Image source: Getty Images.

1. What is Carpenter Technology Corporation?

Let's begin with the basics. Despite the name, Carpenter Technology Corporation is not a tech stock. Instead, it's a metals manufacturer. Carpenter Technology makes high-strength and high-temperature metal alloys (including nickel) and titanium wire used in the construction of aircraft, and also used on oil rigs. 50% of Carpenter's revenue comes from sales to the booming aerospace industry, where customers include airplane parts-supplier and Berkshire Hathaway subsidiary Precision Castparts, and where backlogs have mounted massively in recent years. Much of the rest of the business comes from energy firms such as Brazilian oil giant Petrobras.

Last year, Carpenter's sales into these industries amounted to $1.8 billion, down about 18.5% from 2015 levels, which helped to push Carpenter's profits into the red. On the plus side, Carpenter had a profitable fiscal second quarter, with CEO Tony Thene calling out "solid demand from ... new engine platforms" in Aerospace as one factor driving profits. Meanwhile, the company's energy business was "continuing to show signs of recovery" as oil prices rebounded off of recent lows. Combined, these trends permitted Carpenter to exceed Wall Street estimates.

Regardless, investors prefer their stocks to earn money, not lose it. And with Carpenter's financials continuing to show a trailing-12-month loss, that may be depressing the stock's price. As analyst Seaport Global Securities points out in a write-up on StreetInsider.com this morning, Carpenter's shares have been flagging along with its profits -- down 13% since the beginning of March. But Seaport thinks this is a mistake.

According to the analyst, Carpenter's shares are suffering alongside a "broader retreat of commodity assets." But the aerospace side of Carpenter's business is not really a commodity. Precision Castparts, for example, has only seven direct competitors all around the globe. And with Carpenter's aerospace sales up 15% sequentially, and plenty of more work to be done as the industry works through its airplane order backlog, Seaport sees good things ahead for Carpenter.

And that's not all. While Carpenter's aerospace business is booming already, Seaport also sees potential on the energy side of the equation. Energy markets, says the analyst, are "in a period of transition with US land rig count activity increasing."

To date, Carpenter's big problem is that after investing $518 million in its new Athens facility to serve this market, that factory (located in Tanner, Alabama) is currently running at only 50% of capacity -- due to the decline in oil extraction. As oil markets recover, however, Seaport believes we will see Carpenter's "major strategic investment in Athens ... finally become a meaningful contributor over the next 12 months."

And "meaningful" could be an understatement. With high fixed costs tied up in the Athens facility, low utilization is a profit-margin killer. By the same token, though, as utilization improves, more and more revenue will drop directly down to Carpenter's bottom line, improving the company's profitability significantly.

How significantly? Analysts who follow the company make the amazing projection that profit growth at Carpenter could more than double every year for the next five years. From just $0.23 per share earned in fiscal 2016, Carpenter's profits could zoom as high as $2.74 per share by 2019 -- a 12-fold increase in just three years.

If that's how things play out, Carpenter stock that sells for less than $39 per share today could be valued at as little as 14 times earnings three years out -- not a bad price to pay for 100%-plus annual growth. Meanwhile, even based on current numbers, Carpenter's market capitalization of $1.7 billion doesn't seem terribly expensive in light of the company's $69 million in trailing free cash flow. That works out to a price-to-free-cash-flow ratio of only about 25.

Long story short: Seaport Global is right. If Carpenter's profits grow anywhere near the rate that the analyst is projecting, Carpenter stock could be a real bargain right now.