More than a year has passed since Chipotle Mexican Grill's (NYSE:CMG) E. coli crisis passed. The outbreak of disease-causing bacteria sickened dozens of customers and knocked the wind out of Chipotle shares -- and the business itself. It didn't help when a Chipotle location in Boston experienced a norovirus outbreak at the same time, nor did an incident of Salmonella at a Minnesota restaurant in the summer before the E. coli outbreak.

Management's response didn't help, either, as the company was slow to acknowledge fault and apologize, and executives seem to make matters worse by blaming the CDC's reporting protocol and the media for the customer backlash. 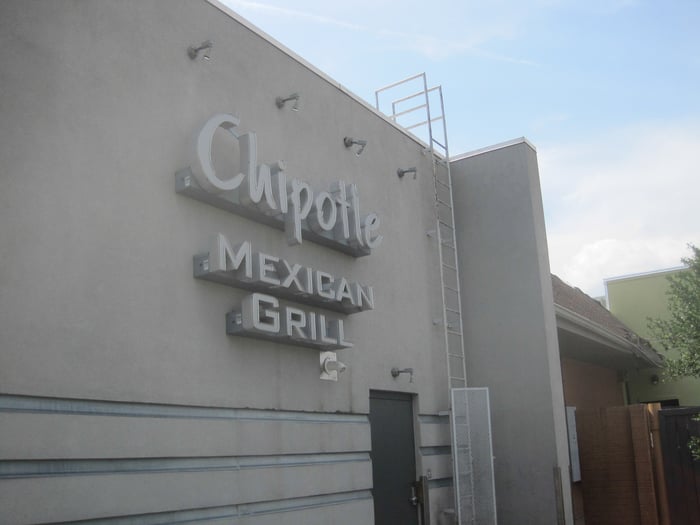 In a further sign of the company's tone-deafness, its marketing campaign last summer ignored the food-safety concerns and instead focused on the burrito chain's higher-quality ingredients, as prior campaigns had. But that failed to reassure rattled customers and did little to bring them back through the doors.

Chipotle's woes even forced a management shake-up, as the company jettisoned its co-CEO structure along with co-CEO Monty Moran, leaving founder Steve Ells as the sole chief. However, despite all of Chipotle's efforts over the past year to make amends for the E. coli crisis, the stock remains mired around the $400 mark.

Now, it seems though that the company may have found a glimmer of hope as it tries to turn around its business. A survey by Market Force Information found that Chipotle has returned to the top spot in the Mexican food category, after falling to second last year behind Taco Bueno.

The study found that Chipotle's customer loyalty score improved by four points to 57%, perhaps a reflection of the company's recent efforts to improve customer service, which had been neglected as it focused on food-safety protocols instead.

Chipotle ranked first for food quality, cleanliness, and curb appeal and was tied for the top spot with Qdoba and Moe's Southwest Grill for service speed.

Customer perception is the key

Any comeback for Chipotle has to start with the customer, as the connection between customer satisfaction and sales growth in consumer-facing businesses is undeniable. Businesses such as Amazon.com, Netflix, and Costco all rank near the top in customer satisfaction scores, a major reason they have all consistently gained market share over the past decade and their stocks have outperformed the market.

The Market Force survey also noted that a "delighted" customer is 3.1 times as likely to recommend as those who are "just satisfied." Happy customers are often the best advertising tools for restaurants. Chipotle had notably eschewed traditional advertising and was a customer darling before the E. coli outbreak, but that has now changed. According to YouGov, Chipotle ranks only in the 31% percentile in positivity for the nearly 4,000 brands it surveys, though its rank moved up 47 spots from its last survey. Still, that low score indicates Chipotle has plenty of room for improvement in customer perception.

Chipotle's first-quarter earnings report, due out in April, will be crucial in determining whether the company is on the right path to recover from the E. coli crisis. Since the outbreak began in November 2015, this report will be the first one to fully lap the effects of the food-safety crisis.

Analysts are expecting overall revenue to grow 25.5% to $1.05 billion and for earnings to swing from a loss per share of $0.88 to a profit of $1.26. 2017 will be a crucial year for Chipotle. and its investors as the stock still has expectations of a comeback baked in.

The increased focus on customer satisfaction seems to be paying off with the improved perception scores. If Chipotle executes elsewhere, that should lead to needed a momentum to hit its goal of $10 in EPS for 2017.