Once upon a time, Kinder Morgan (NYSE:KMI) was a dividend lover's dream. From its re-emergence on the public scene in 2011 through the middle of 2015, the company offered investors a yield that averaged around 4%. Further, upon rolling up its master limited partnerships (MLPs) in 2014, the company had plans to increase the payout by 10% annually through 2020.

However, due to the oil market downturn, the dividend came crashing down in late 2015 when the company made the painful decision to slash the payout so it would have more cash to finance growth while it shored up its financial situation. That said, with Kinder Morgan's finances heading in the right direction, and several growth projects about to enter service, the company could significantly increase its dividend later this year. It's a catalyst that could make this stock a gold mine for income investors. 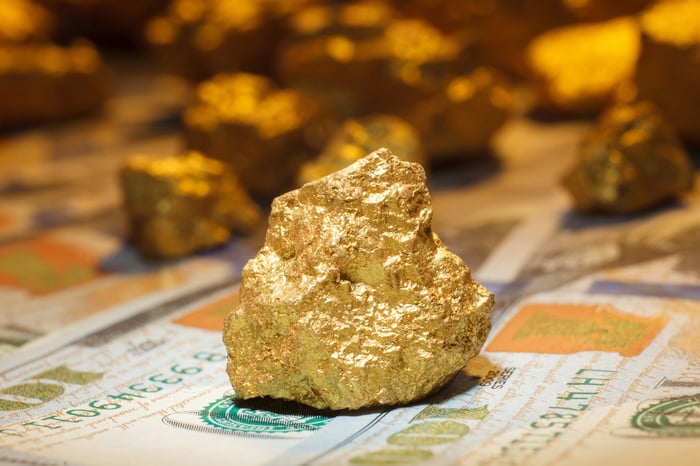 Kinder Morgan spent all last year working to improve its balance sheet and source outside funding for growth projects. As a result, the company pushed its leverage ratio down from 5.6 times net debt-to-adjusted earnings before interest, taxes, depreciation, and amortization (EBITDA) at the end of 2015 to 5.3 times at the end of last year. It did so by generating excess cash flow after paying a smaller dividend and entirely financing growth capital with internally generated cash flow, as well as completing several strategic partnerships.

Those strategic alliances have continued in 2017, with the company recently securing a financing partner for a portion of its Elba Liquefaction Project. Like its previous deal, the company not only received a reimbursement payment for a part of the capital already spent on the project, as well as a financing commitment for a percentage of future capital expenditures (capex), but Kinder Morgan received a premium payment for the value it created thus far. This incremental cash put the company one step closer to its leverage target.

That said, the pipeline giant still has one more large hurdle to overcome, which is finding a financing solution for its Trans Mountain Pipeline expansion project in Canada. The company is exploring a variety of options for that project, including seeking joint venture partners, as well as a potential initial public offering (IPO) of that project, or its entire Canadian business. Once the company has a solution in hand, it will free up a significant amount of future cash flow that it can redirect toward shareholder distributions, likely a substantial dividend increase.

Kinder Morgan has a high visibility that it will generate $4.46 billion of distributable cash flow this year, which works out to $1.99 per share. While that's down from 2015's peak of $2.14 per share due to weaker commodity prices and asset sales, earnings should rebound over the next few years as the company completes projects in its backlog.

That said, even using 2017's number, the company can pay a much higher dividend starting next year, assuming it finds a partner for Trans Mountain. Several analysts, including Goldman Sachs and Raymond James, believe that the company could boost its dividend between 100% to 130% as early as 2018. That's not a crazy idea because a 100% increase in the dividend would push its payout from $0.50 per share annually to $1.00 per share, which would equate to roughly 50% of its cash flow.

That 50% payout level would put it in line with those of top-tier energy infrastructure companies Enbridge (NYSE:ENB) and TransCanada (NYSE:TRP). Enbridge, for example, anticipates maintaining a conservative payout ratio of 50% to 60% of cash flow, even as it aims to grow its dividend by a 10% to 12% annual rate through 2024. Meanwhile, as the charts on the following slide shows, TransCanada has typically paid out less than 50% of its funds generated from operations while delivering steady dividend growth: 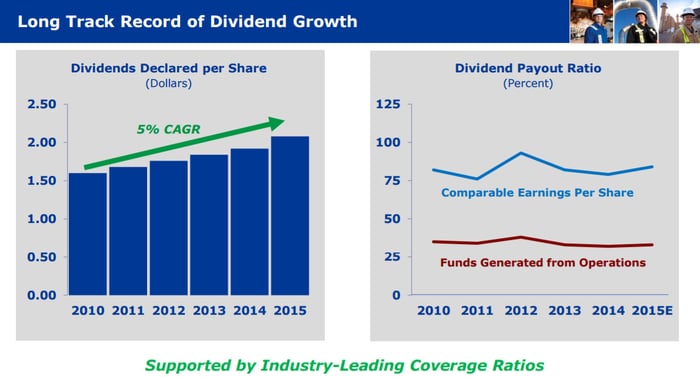 Because it has such a large cushion and a huge backlog of growth projects, TransCanada recently accelerated its dividend increases, with plans to boost its payout by 8% to 10% annually through 2020.

Given the plans of its rivals, Kinder Morgan has several options. It could choose to deliver a big initial increase of around 100%, and then grow the payout at the same rate cash flow increases in future years. Alternatively, the company could opt for a lower increase initially, just so that it can increase the payout by a higher rate in the coming years. Either way, it is growing more likely that Kinder Morgan will deliver significant future dividend growth for investors who purchase the stock this year.

Kinder Morgan's dividend growth plan took a major detour as a result of the oil market downturn. However, the company is getting close to being in the position to return more cash to investors, with the growing likelihood of a significant increase after it secures financing for Trans Mountain. It's a catalyst that income investors won't want to miss.