Following Intel's (NASDAQ:INTC) announcement that it would be spending more than $15 billion to acquire computer vision specialist Mobileye (NYSE:MBLY), the former posted a frequently asked questions (FAQ) document on a website dedicated to this proposed transaction.

One thing that Intel addressed -- and I really appreciate that it did -- was the topic of current and future manufacturing plans for Mobileye's computer vision chips. 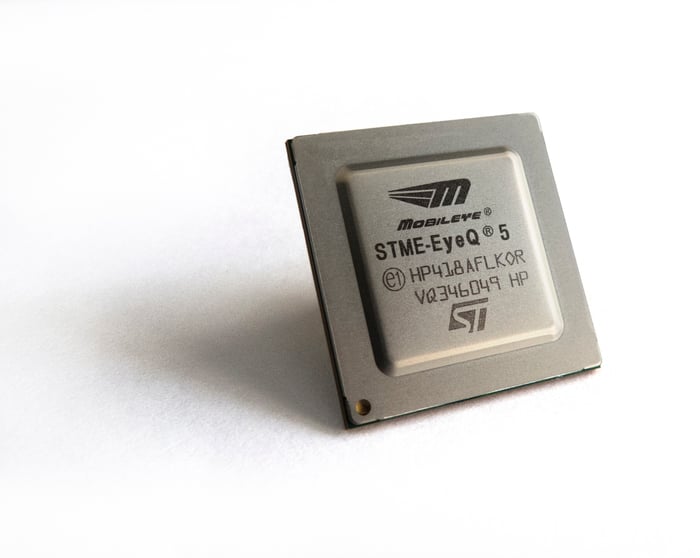 "Intel's priority, post-closing, is to maintain the best engineering, best cost, and best performance in all aspects of the new organization," Intel said, adding that "Mobileye's current relationships with suppliers and technology providers are an integral part of Mobileye's value."

In other words, Intel didn't just spend $15 billion for this company (which clearly had something that Intel didn't) just for Intel to mess with the currently working recipe.

Why not bring EyeQ4 and EyeQ5 in-house?

In the FAQ, Intel explicitly wrote: "Does Intel plan to bring manufacturing in-house? If so, when?"

Of course, Intel didn't directly answer the question that it brought up (though kudos for at least recognizing that this is a question whose answer would interest investors), but it does sort of imply a response.

Moving EyeQ4 to Intel technology simply wouldn't make sense -- the design is about to go into mass production, per Intel, so it's far too late to change that. Intel could conceivably migrate the EyeQ4 design to its own manufacturing technology at some point, effectively becoming a "second source" to ST Microelectronics but design work on such a product wouldn't even begin until the deal closes (in roughly nine months).

By the time an Intel-built EyeQ4 could potentially hit the market, the design will be very old news.

It isn't reasonable to bring EyeQ5 in-house, either. If the chip is going to sample in mid-2018, then that means design work is already well underway -- moving to Intel technology would almost certainly cause a schedule slip.

But even if it were possible to change manufacturing direction right now for EyeQ5, it wouldn't be feasible to make the change. Intel CEO Brian Krzanich said on the accompanying conference call that both Mobileye and Intel must, per regulatory requirements, operate as independent companies until the deal closes at some point within the next nine months.

Since Mobileye clearly didn't show any interest in using Intel Custom Foundry (ICF) for its EyeQ chips, Mobileye suddenly deciding, completely independent of this pending transaction, to use ICF for the EyeQ chips just wouldn't happen.

Intel addressed post-EyeQ5 chips in a roundabout way in its FAQ as well. Intel's claims with respect to its "priorities" post-closing as well as its claim about Mobileye's current supplier/technology partners being an "integral part of Mobileye's value" seem to suggest that the chip giant has no interest in trying to get Mobileye to use Intel's manufacturing technologies unless doing so would be an unequivocal win for Mobileye under Intel.

Mobileye's chips do seem as though they would benefit from using advanced manufacturing technology. Indeed, in an article published in EETimes, an ST Micro executive said that EyeQ5 will "contain eight multithreaded CPU cores coupled with eighteen cores of Mobileye's next-generation vision processors."

That same executive also explained to the publication that "this level of complexity has prompted ST to use the most advanced technology node available."

Clearly, Mobileye's future processors will benefit from using advanced manufacturing technologies, so there could be value in building, say, the EyeQ6 and beyond using Intel manufacturing technology. However, if moving from other manufacturers to Intel will introduce undue risk/complexity, then Mobileye (under Intel's wing) should be allowed the freedom to build its chips elsewhere.