Driverless car technology is still in its nascent stage but will grow in leaps and bounds in the coming years. IHS Automotive forecasts that autonomous vehicle sales will shoot up from 600,000 units in 2025 to almost 21 million by 2035, clocking a compound annual growth rate of 43%.

The Boston Consulting Group, meanwhile, expects the driverless car market to create a $42 billion revenue opportunity in 2025 itself, indicating that there is a lot of money to be made in this space. One of the ways to tap this huge opportunity is through technology providers such as Alphabet (NASDAQ:GOOG) (NASDAQ:GOOGL), Microsoft (NASDAQ:MSFT), and NVIDIA (NASDAQ:NVDA), as they will play mission-critical roles in enabling autonomous cars.

NVIDIA is best known for making gaming graphics cards, but its products are in high demand from automakers as well. Tesla, for instance, is using the chipmaker's artificial intelligence-based DRIVE PX2 platform in the Model S and Model X cars. What's more, the automaker is also going to deploy NVIDIA's supercomputer in its mass-market Model 3.

The Tesla partnership is already delivering results, as NVIDIA's automotive revenue shot up over 37% year over year for the fiscal fourth quarter. The company could sustain its automotive momentum, as it is working with German giant Audi to bring a Level 4 autonomous car to the market by 2020. Level 4 means it can drive itself entirely on its own.

The two companies showcased an Audi Q7 at CES earlier this year, claiming that the car learned to drive on its own in just four days using NVIDIA's AI-based DRIVE PX2 supercomputer. More importantly, NVIDIA is looking to push the envelope: It's now working on a more advanced supercomputing platform -- Xavier -- that consumes less power but packs more computing capacity.

NVIDIA's graphics processing units accelerate the processing of huge amounts of data in real time, allowing the vehicle to make quick decisions. As the company increasingly turns its attention toward making its self-driving supercomputers better through partnerships with big auto companies, it won't be surprising if its platform ends up powering fully autonomous cars by 2020.

NVIDIA, therefore, looks right on the edge of tapping the driverless car opportunity, as 80 companies are using the DRIVE PX2 platform to develop their technology.

Driverless cars, or any connected car for that matter, will generate huge volumes of data from their sensors and cameras that will need storage and processing. Microsoft wants to ingest all this data and then use its artificial intelligence (AI) skills to analyze it to help cars drive better through its Azure cloud-based Connected Vehicle Platform. 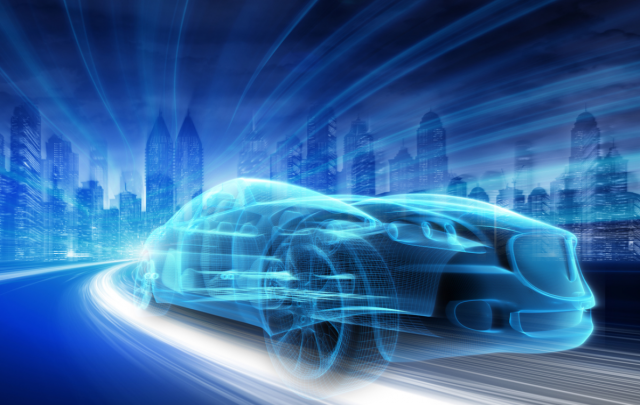 The Redmond-based company has picked a sweet spot to tap the driverless car opportunity, as a connected vehicle is slated to produce 20 gigabytes of data per day in 2017 if driven for just two hours. In the case of autonomous cars, the data generation could be at least 10 gigabytes per second. Now, all this data can't be stored on the car itself due to limited storage capacity, creating an opportunity for Microsoft to push its cloud product to automakers.

The Renault-Nissan alliance has already decided to use the software giant's connected vehicle platform, pledging to put 10 cars with autonomous technology on the road by 2020. Additionally, Indian automaker Tata Motors is adopting the platform to bring connectivity features and predictive maintenance at affordable prices to mass-market vehicles in India.

Microsoft is also finding demand for its connected car platform beyond automakers. For instance, reinsurance provider Swiss Re will analyze driving behavior with the help of the telematics data collected by the cloud, and then create customized insurance deals for customers.

The inevitable data increase from driverless and connected cars could power Microsoft's Azure cloud business to new highs in the long run, allowing it to sustain rapid revenue growth from this segment. 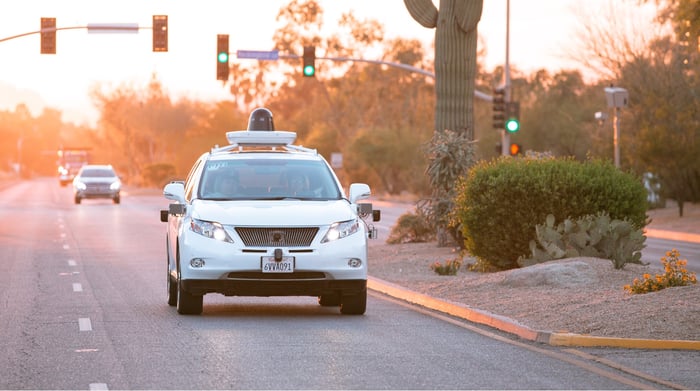 Alphabet's Waymo moonshot could be a big business

Alphabet's Waymo division has the best driverless car technology, according to data from the California DMV. As it turns out, its driverless cars have the lowest incidence rates and the highest miles logged compared to the others testing their technology on California roads.

Alphabet can use its lead in this space by becoming an infrastructure and knowledge supplier to auto companies, and this is what it is probably planning to do. Earlier this year, Waymo announced that it is going to manufacture driverless-technology-enabling sensors on its own so that it can better integrate the software into hardware.

In fact, the Waymo division has slashed the price of the crucial LIDAR sensor by 90% since 2009, so it makes sense for it to offer a packaged hardware-software bundle to potential customers. The company has already gained a customer in the form of Fiat Chrysler Automobiles for its self-driving technology, with Bloomberg reporting that both companies could eventually roll out a ride-sharing service.

On the other hand, Honda seems to be warming up to Waymo's self-driving capabilities to accelerate its own driverless car development. The Japanese automaker is now exploring the possibility of equipping its cars with fully autonomous driving technology in cities instead of its earlier ambition of just highway driving.

Therefore, Alphabet's years of leadership in driverless cars make it one of the hottest prospects to benefit from this emerging technology.