Buying a stock at an all-time high naturally invokes a kind of fear, but how about adopting Oscar Wilde's advice: believing that the cynics know the price of everything but the value of nothing? Despite its stock being at an all-time high, roofing and insulation materials company Owens Corning (NYSE:OC) looks like a good value, and a great stock to play the housing recovery.

Following the aftermath of the great financial crisis and a U.S. housing market that last peaked in 2016, it would be understandable if investors were hesitant to pile into housing-related stocks. However, Owens Corning and other housing-related stocks like roofing materials supplier Beacon Roofing Supply (NASDAQ:BECN) and heating, ventilation, and air conditioning company Lennox International Inc (NYSE:LII) currently trade at all-time highs. The question is whether they are a good value or not. 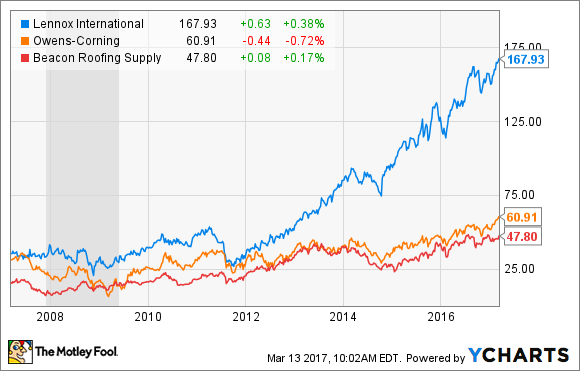 To answer this question, let's start with the housing market fundamentals. The good news is that they remain supportive of growth. For example, employment is growing (non-farm payrolls), homeownership is lower than it's been since the mid-'90s, housing affordability remains high, and housing starts are still growing steadily. 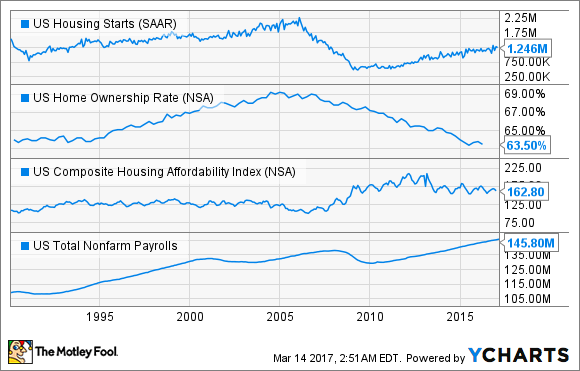 With the headline analysis out of the way, let's turn to specific stocks. A quick look at valuation multiples -- based on analyst forecasts -- reveals that Owens Corning looks like a good relative and absolute value.

Owens Corning has engineered a turnaround in recent years, and the stock offers a compelling mix of margin expansion accompanied by strong free cash flow generation. 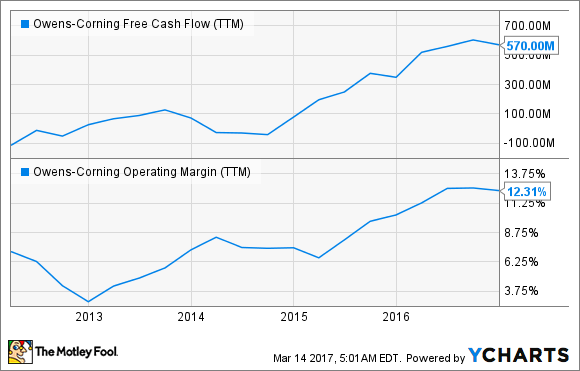 The company reports using three business segments, the relative importance of which you can see below in terms of earnings before interest and taxes (EBIT). Around 80% of roofing revenue comes from repair and remodeling in the U.S. and Canada, with new construction in the same region accounting for around 8%, and commercial and industrial making up the rest. Overall demand tends to rise and fall with the housing market -- even repair work tends to rely on housing turnover and price appreciation, as Home Depot CFO Carol Tome discussed previously.

The big variable comes from storms and other weather-related events, and given that 2016 was a stormy year in the U.S., management doesn't expect underlying growth to "offset anticipated declines in the storm markets, particularly Texas" -- this goes some way toward explaining why analysts' estimates have overall revenue growing at just 2.4% in 2017 compared to 6% in 2016. No matter: Underlying growth is good.

Around 60% of composites demand comes internationally, with 26% coming from U.S. and Canada commercial and industrial. In other words, the composite segment is not significantly reliant on the U.S. housing market. However, that's no bad thing for investors because management sees glass fiber market demand growing at a rate 1.6 times industrial production. Given that U.S. industrial production looks set to increase its growth rate in 2017, management expects EBIT to grow by $25 million this year -- implying a 9.4% improvement.

Insulation is Owens Corning's most problematic segment. It had a difficult year in 2016 -- sales declined 6%, and adjusted EBIT fell 21% primarily due to lower sales volumes in the U.S. residential market. However, on the fourth-quarter earnings call, CEO Michael Thaman claimed the company "made progress in recovering our market share position in the U.S. residential market" in the second half, and talked of a more stable pricing environment.

Thaman expects insulation revenue to grow about $100 million, implying growth of 5.7%, and EBIT to reach the $160 million level reported in 2015. This suggests an EBIT margin of around 8.6% -- an improvement on 2016's 7%, but still nowhere near the company's historical mid-teens insulation EBIT margin. 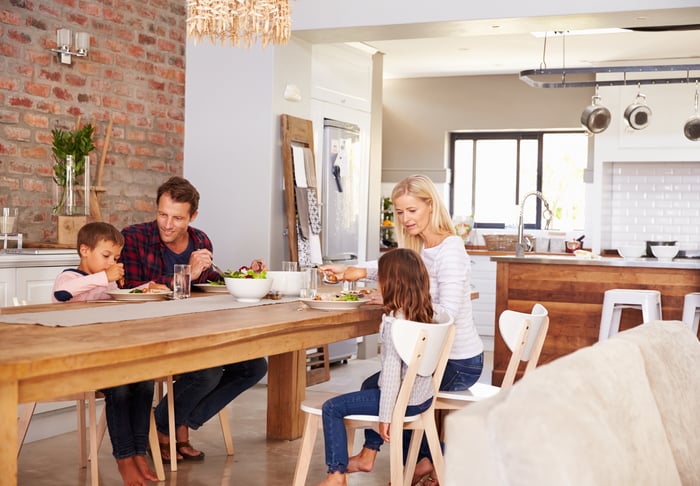 Buy Owens Corning at the high?

An improvement in pricing and volume in the insulation market would leverage into significant earnings growth in 2017, but it's far from a given. Meanwhile, composites should have another good year, and the potential weakness in roofing in 2017 would only really be a consequence of coming up against a tough comparable in 2016 due to harsh weather conditions.

All told, Owens Corning is making underlying improvements to its business, and its end markets look set for continued growth. Meanwhile, margin and cash flow generation continue to expand impressively. Throw in an attractive valuation (forward EV/EBITDA multiple of just 8 times, and lots of cash flow) and it's a stock worth buying -- even if that means buying it at an all-time high.