Please ensure Javascript is enabled for purposes of website accessibility
Free Article Join Over 1 Million Premium Members And Get More In-Depth Stock Guidance and Research
By John Maxfield - Mar 18, 2017 at 10:42AM

CEO Brian Moynihan talked at length about the bank’s dividend in his latest annual letter to shareholders.

If there was any doubt about Bank of America's ( BAC -1.42% ) desire to raise its dividend, then CEO Brian Moynihan's recently released annual letter to shareholders should put that doubt to rest. Moynihan mentioned the word "dividend" nine times in his letter, two of which referenced the bank's "focus on increasing" its quarterly payout.

This will come as no surprise to investors who have followed Bank of America's progress since the financial crisis, when the bank was forced to cut its once-generous dividend to $0.01 per share. Soon after Moynihan took over at the beginning of 2010, he made it clear that one of his priorities was to restart the flow of capital to shareholders. The problem, however, was that the Federal Reserve had different ideas. It gained authority over big-bank capital plans in the 2010 Dodd-Frank Act as part of the central bank's duty to oversee the industry's annual stress tests.

In the inaugural test under the new legislation in 2011, Bank of America's request to increase its dividend was denied, which seems to have convinced the North Carolina-based bank to avoid asking for another increase until 2014, when it boosted its quarterly payout to $0.05 per share. It then increased it again, to $0.075 per share, two years later. 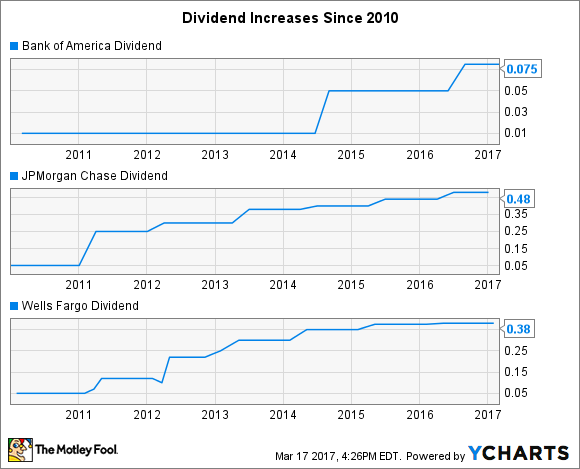 Meanwhile, all of the other large banks, with the exception of Citigroup, have been given the go-ahead to raise their dividends on an annual basis. The net result is that Bank of America pays out half as much of its earnings to shareholders each year compared to banks like Wells Fargo and JPMorgan Chase.

It's for this reason that one of Moynihan's top hopes for the current presidential administration, which has vowed to ease the regulatory burden on banks, is that it will remove the Fed's veto power over big-bank dividend plans.

Asked at an industry conference last year what aspects of Dodd-Frank that Congress and the incoming Trump administration should revisit, Moynihan answered:

Whether this actually happens remains to be seen. But even if it doesn't, given Bank of America's improving prospects, with near-record earnings in 2016 and an even better performance shaping up for 2017 thanks to rising interest rates, it seems safe to say that shareholders of the nation's second biggest bank by assets will see their quarterly dividend checks rise over the quarters and years ahead.