Please ensure Javascript is enabled for purposes of website accessibility
Log In Help Join The Motley Fool
Free Article Join Over 1 Million Premium Members And Get More In-Depth Stock Guidance and Research
By Reuben Gregg Brewer - Mar 18, 2017 at 8:10AM

Freeport-McMoRan Inc. (FCX -3.38%) and Barrick Gold (GOLD -0.80%) rank among the largest gold and copper miners in the world. After years of retrenching, both are in better operational and financial shape than they were when commodity prices started to tumble in 2011. But now that metals prices are finally rising, there are new troubles to face. Barrick's headwinds, however, don't look nearly as formidable as what Freeport-McMoRan is facing.

Freeport-McMoRan's biggest problem during the commodity downturn wasn't actually copper or gold, it was oil. The company made what in hindsight was a mistaken bet on the oil patch by buying McMoRan Exploration Co. and Plains Exploration in 2013. That increased long-term debt from $3.5 billion to $20 billion in just one year. When oil prices fell shortly after the deal was consummated, debt suddenly became a material issue. 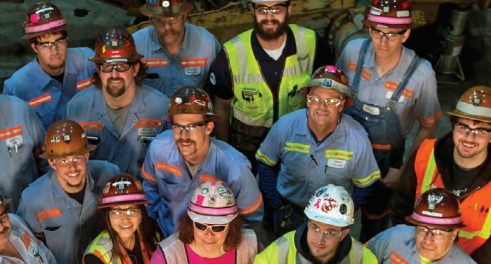 To the company's credit, it has worked its way back to a healthier state by selling assets and rejiggering its leadership. The progress has been material. Freeport started 2016 with debt at around $20 billion and ended the year with debt at around $12 billion. And it believes it's done selling assets to pay down debt, which would normally suggest a materially brighter future. Not so fast...

Just as the miner was starting to get its house in order, the Indonesian government threw a wrench in the works by implementing new rules that, effectively, shuttered Freeport's giant Grasberg mine. That mine accounts for roughly 30% of Freeport's copper reserves and about 95% of its gold reserves, so this is a big deal. And it's turning out to be a complex political and financial issue to resolve. Until there's more clarity on Grasberg, most investors should stay on the sidelines here. 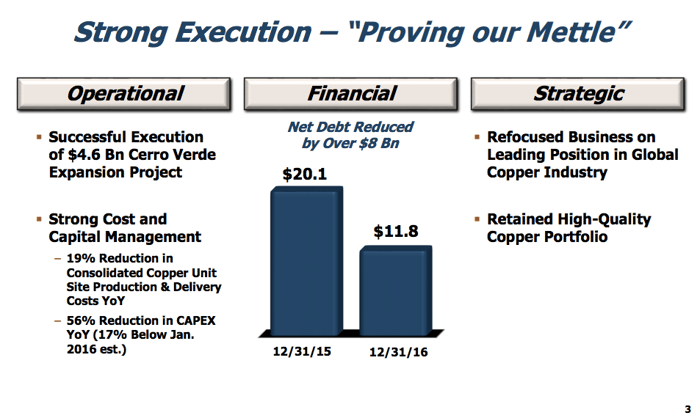 Some of Freeport's key accomplishments in 2016.  Image source: Freeport-McMoRan Inc.

More than the lesser evil

Which brings us to Barrick Gold. The company has also been working itself into better fighting shape, selling non-core assets and cutting costs, among other things. For example, debt fell from $13 billion at the start of 2015 to around $8 billion at the start of this year. The company is targeting $5 billion by the end of 2018. All in sustaining costs, meanwhile, fell from just over $1,000 per ounce of gold in 2014 to around $800 per ounce last year.

Barrick is dealing with some of its own investment mistakes, too. That includes the Pascua-Lama mine, which got the go ahead in 2009 and is nowhere near up and running because of legal and regulatory pushback from both of the countries in which the mine site sits. Barrick's self inflicted troubles, however, aren't as big as the oil issue that Freeport was, and really still is, facing. In other words, Barrick should have relatively smooth sailing ahead. 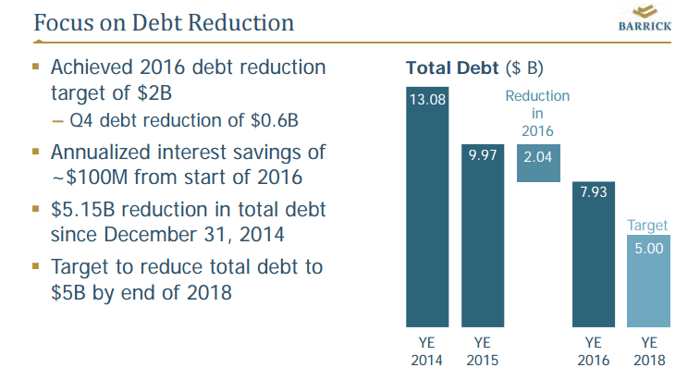 Barrick has made big strides on its balance sheet, too.  Image source: Barrick Gold

So Barrick easily looks like the better option of this pair. However, you should keep work relations in the back of your mind. BHP Billiton Limited has been dealing with a strike at its Escondida mine in Chile. Barrick has a mine in the country, too, and could shortly find itself facing equally as tough negotiations. That said, a strike at the company's Zaldivar mine wouldn't pose nearly as much of an issue as what Freeport is facing at Grasberg even though Zaldivar holds about half of Barrick's copper reserves.

Freeport's Grasberg mine is a huge question mark right now. Not only is it a large asset for the miner, but the trouble stems from changes made at the government level in Indonesia and are proving difficult to work through. Even though Freeport has taken aggressive action to right itself after a poorly timed oil bet, the risks here are extremely high right now.

Barrick isn't exactly risk free, having made its own investment mistakes and the fact that it's facing a potential labor issue at a key asset. But the headwinds are far less onerous, allowing the progress it has made on the debt and operations front to shine through. It's the better choice at the moment.