The world's greatest investor placed a big bet on the future of the iPhone maker. Here's why Warren Buffett likes Apple.

Throughout his career, Warren Buffett has made successful investments in several different industries, but some of his most famous and rewarding investments have been in consumer product companies. His 1988 investment in Coca-Cola is probably Buffett's most famous investment. Similar to Apple, Coca-Cola had a product with universal appeal and was demonstrating growing revenue and profits at the time when Warren Buffett invested 25% of Berkshire Hathaway's book value in Coke shares. Although the Apple investment is notable because of Buffett's historical tendency to shun tech stocks, it actually fits the qualities the Omaha-based investor has looked for in other investments.

If you use an iPhone, iPad, and/or a Mac computer, you probably have some experience with the stickiness of Apple's products and services. It's not likely that someone who has taken lots of photos of treasured moments and purchased lots of content from iTunes is suddenly going to abandon Apple for a Samsung Electronics Co or a Microsoft product.

Millions of customers have a strong attachment with Apple's devices, and this is what attracted Warren Buffett's attention:

Apple strikes me as having quite a sticky product and enormously useful product that people would use ... The continuity of the product is huge, and the degree to which their lives center around it is huge. And it's a pretty nice ... franchise to have with a consumer product.

Apple creates beautifully designed products and has successfully tied it all together with Apple's iCloud storage service, which automatically keeps all of your content synced between devices.

The unique, spartan-esque product design and sticky services have led Apple to become one of the most iconic brands in the world. Apple consistently earns high customer satisfaction ratings, which continues to help sell tens of millions of iPhones every quarter. This success has been a good marketing tool for other product lines like Mac computers, which continues to show strength while the PC industry is in decline.

These qualities have led to impressive growth in Apple's business over the last 10 years:

While Samsung controls the No. 1 spot in smartphone market share in terms of unit sales, Apple generated every dollar of profit in the industry in 2016, according to one analyst. Apple achieves this by commanding a premium price to competing products, reinforcing the brand's strength in the marketplace.

Let's not kid ourselves: Warren Buffett is one of the world's greatest investors. You could do a lot worse than just sit back and buy every stock Berkshire Hathaway owns, and never sell.

But keep in mind that Warren Buffett's investments don't always perform well right off the bat. In 2011, he disclosed on CNBC that Berkshire Hathaway's $10.7 billion investment in International Business Machines, which has dramatically underperformed the market ever since. 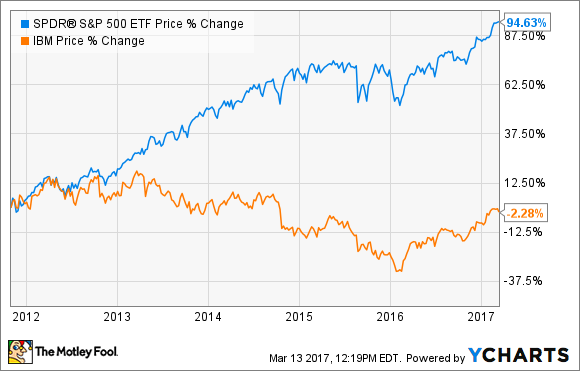 Don't expect to hit a homerun with Apple

Nonetheless, the strong financial position of the company and a great brand should deliver decent returns for shareholders in the future, but don't expect to earn anything close to the stock's nearly 1,000% rise in the last 10 years. 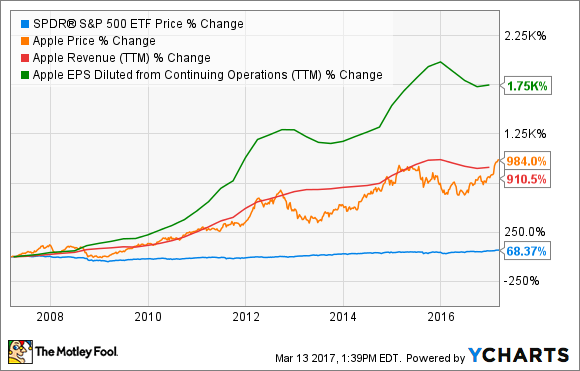 The stock trades for a very reasonable 16 times earnings, and analysts expect the company to grow about 9% annually over the next five years.

Apple also offers an annual dividend yield of 1.6%, and management has been using cash flow to buy back shares, helping earnings per share grow 16% annually over the last five years compared to 14.8% annual growth in revenue.

Plenty more dividends and share buybacks will come since the business generates over $60 billion in annual cash flow and currently has a whopping $246 billion in cash assets on the balance sheet and only $73.5 billion in debt.

Investors can achieve success using their own insights

My takeaway from Warren Buffett's investment in Apple is the advantage individual investors have over the big financial institutions in managing their own money. Anyone who has been an Apple customer in the last 10 years would have figured out long ago the same qualities one legendary investor observed only recently.