Demand for oil isn't totally price inelastic, and after the oil price shocks of the 1970s significant adjustments were made which had far reaching consequences for fuel economy and electricity generation.

The shocks to oil prices created by the Arab oil embargo in 1973 and the revolution in Iran in 1979 had far reaching consequences that still affect investor thinking today. Analyzing the aftermath of the ensuing energy crisis and stagflation (high inflation with stagnant growth) leads to one key conclusion oil stock pickers need to be aware of: the demand for oil is not price inelastic.

What price inelasticity of demand for oil means

Price elasticity of demand simply means that as the price of a good goes up or down its demand will adjust accordingly -- usually as price goes down, demand goes up. Therefore, when oil perma-bulls make the commonly heard argument that oil demand is price inelastic, they are saying that as oil prices rise, demand will stay constant. 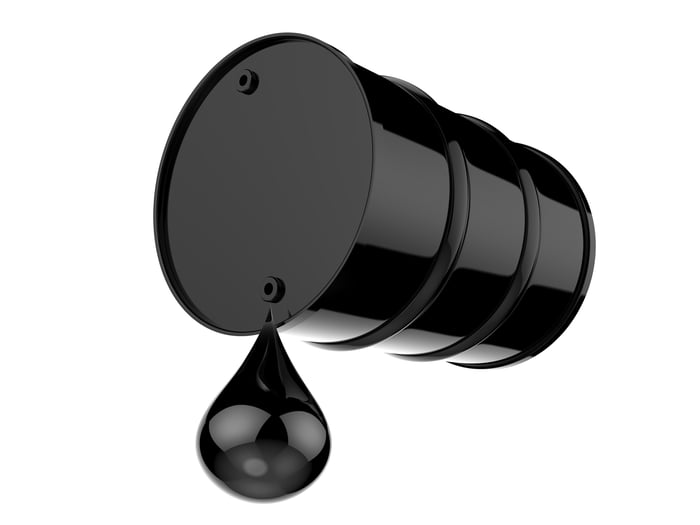 This is important because it implies that oil demand won't taper off and consumers won't start using alternatives -- a bullish argument for oil.However, the evidence from the aftermath of the energy crises is that demand, at least past the short-term, is actually price elastic. In other words, demand can go down as prices go up.

As you can see below, oil prices dictate the direction of oil stocks. The chart shows oil prices alongside a leading energy ETF, the Energy Select Sector SPDR (XLE -3.97%), which has ExxonMobile Corporation (XOM -3.13%) and Chevron Corporation (CVX -2.63%) as its largest holdings, along with a leading oil equipment and services ETF, the iShares Dow Jones US Oil Equip. (IEZ -7.46%), which has Schlumberger Limited. (SLB -6.51%) and Halliburton Company (HAL -8.08%) as its top two stocks. 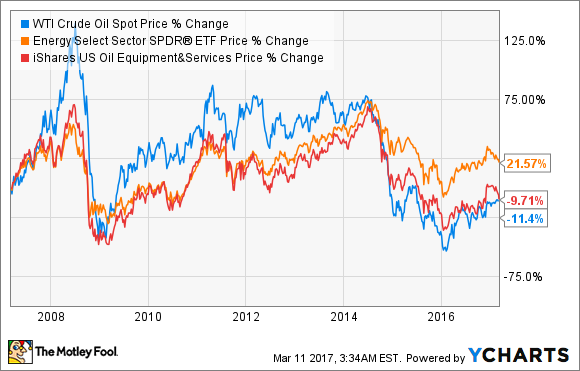 Incidentally, there is a perfectly logical reason why oil services companies, like Schlumberger and Halliburton, should be more affected by spot oil price movements than oil exploration and production (E & P) companies (ExxonMobile and Chevron). Specifically, earnings at services companies are more dictated by near-term oil prices, which affect demand for oil field services, while E & P companies are better valued with their long-term oil reserves in the ground in mind, along with their exploration potential.

The oil price shocks referenced above were dramatic by any measure. After adjusting for inflation, the Arab oil embargo crisis of 1973 saw oil prices jump from $20 to around $50 in no time -- an increase of 150% -- while the Iranian revolution led to an increase from around $55 to near $120 -- a near 120% increase.

There are two arguments to suggest that the impact of these events had significant effects on demand. First, let's look at US motor vehicle fuel efficiency, a very important determinant of global oil demand. The International Energy Agency (IEA) estimates world oil demand in 2016 was 96.6 million barrels per day (mbpd), with the U.S. responsible for around 21%, and U.S. motor gasoline demand (9.3 mbpd) responsible for 9.6% of total world demand.

The chart below shows how the crises spurred increases in fuel efficiency, with an inflexion in 1973 and a huge jump in 1979 -- evidence that higher oil prices will change thinking about fuel economy and reduce oil demand. 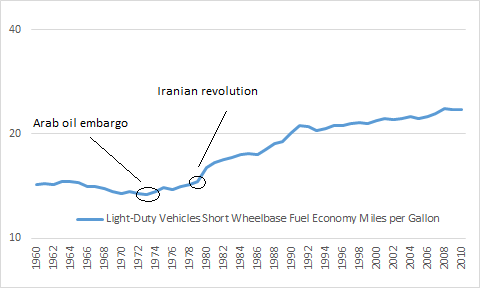 The second chart shows energy inputs into electricity plants in the U.S. As you can see below, in 1971 oil products were the third largest contributor, but following the oil crises of the 1970s actions were taken to wean electricity production away from oil and toward coal, nuclear, and natural gas. Again, it's a demonstration of the fact that oil demand can readjust to higher prices -- oil products are pretty much irrelevant to U.S. electricity production now. 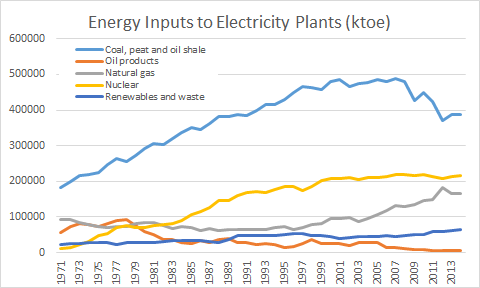 What this means for oil stock investors

The evidence from the actions taken following the energy crises suggests that oil demand isn't as price inelastic as many oil bulls may assume it to be -- a key concern if you are pricing in significant oil price increases in future.

Moreover, given the importance of U.S. gasoline demand, and the fact that 70% of petroleum in the U.S. has been used for transportation in recent years, what happens to global oil demand if the U.S. embarks on a wide-scale shift to energy-efficient electric vehicles?

Even if you are bullish on oil in the long-term -- and there is a case for emerging markets to propel demand -- it might make sense to balance risk by investing in stocks that benefit from trends like electrification of vehicles and the use of natural gas.