Gold and silver miner Coeur Mining Inc (NYSE:CDE) had a successful year in 2016 on many levels. Notably, the miner materially lowered its debt load and reduced its costs. Indeed, investors should be pleased about the operational progress as well as the top- and bottom-line benefit from an upturn in precious metals prices. The outlook for 2017 at Coeur is focused on moving ahead with growth plans, but that means you need to ensure the gains of 2016 don't get squandered.

Coeur Mining's plans for 2017 include the ramp-up of production at its Palmarejo mine, further construction at the Rochester mine, initial production from the Jualin mine, and more generally, expanded exploration for near-mine growth opportunities throughout the company. This fits with the company's recent efforts, which are all about focusing on its core portfolio of assets. 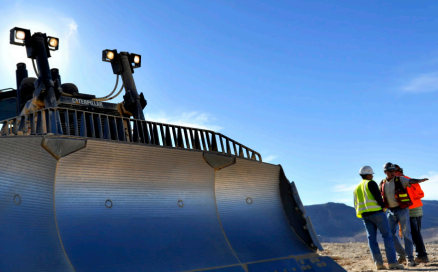 A big part of that process involved selling non-core assets. The company jettisoned four royalty streams and the Martha mine in 2016. It's not done yet, having agreed to sell the Joaquin mine to Pan American Silver (NASDAQ:PAAS) for $15 million in cash and $10 million worth of Pan American stock early this year. Overall, Coeur has come a long way toward scaling back to its most meaningful opportunities.

The foundation for 2017's goals is twofold. First, the asset sales helped the company lower its debt load from $558 million in the third quarter of 2015 to a far more manageable $213 million at the end of 2016. Another big assist came from a $200 million stock offering last year that funded the redemption of debt.

Coeur estimates that it will save roughly $30 million a year in interest costs because of its balance sheet strengthening. That's great, but the miner has a lot of spending plans in 2017 and beyond. Higher silver and gold prices will help it afford the costs, but investors will want to keep a close eye on the debt load to make sure it doesn't start to creep up again. 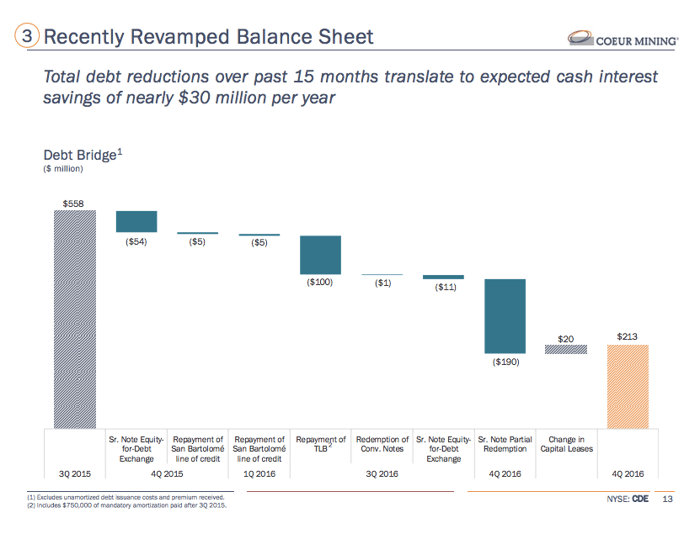 On that front, long-term debt to equity is good metric to eye. In the third quarter of 2015, long-term debt made up nearly 45% of Coeur's capital structure. At the start of 2017, long-term debt was down to around 20% of the capital structure -- a much more reasonable level. As 2017 progresses, and in the years ahead, investors should watch to make sure growth spending doesn't cause that number to start ticking higher in a meaningful way.

The $30 million in interest savings is great news for Coeur's costs, too, but it's also been trimming expenses in other ways. For example, general and administrative expenses are down by 47% since 2013. All-in sustaining costs per silver equivalent ounce, meanwhile, have fallen from $19.70 (or so) in 2013 to a hair under $15.90 last year. To give that a broader context, the average silver price the company realized in 2016 was $17.18, up from $15.46 in 2015. Although the silver price advance in 2016 was nice to see, the average price realized in 2015 highlights just how high Coeur's costs really are. 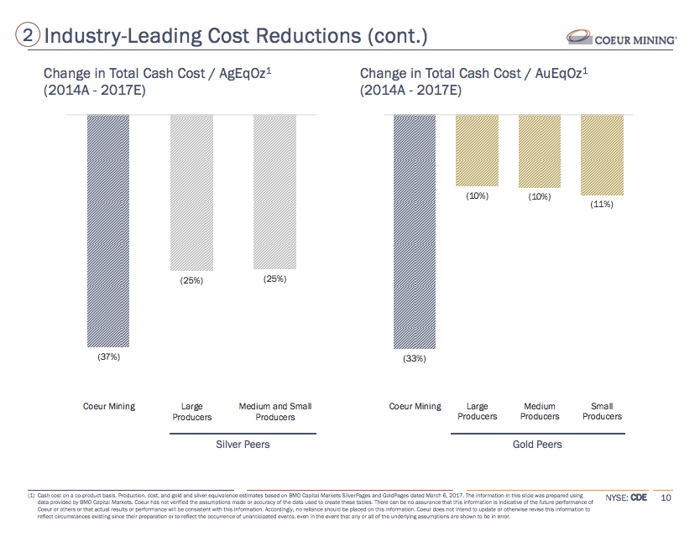 Although Coeur expects its costs to go up a little bit in 2017, investors will want to keep a close eye on all-in sustaining costs to make sure they don't rise further than expected. The problem Coeur faces is that its costs, while lower than they were, are still, as noted, fairly high. So, if gold and silver prices fall again, it could quickly dip back into the red (it made money in 2016 after losing money in the three previous years) and find it harder to invest for the future.

In other words, costs matter a lot at Coeur. It will need to hold the line, or its growth plans could quickly become more difficult to achieve.

To sum it up, Coeur has been working hard to create a foundation for growth. Now that it has that in place, the story from here is likely to be about its growth plans. However, investors can't forget about the foundation. Yes, pay attention to how things are going with the mine expansions and such, but also keep an eye on debt as a percentage of the capital structure and all-in sustaining costs. You might find that growth isn't the big issue anymore if those metrics get too far out of line.