One of last week's biggest winners was Veeva Systems (NYSE:VEEV), moving 10.3% higher after expanding its partnership with cloud-based enterprise-software giant salesforce.com (NYSE:CRM). Veeva announced that there will be new integration between Salesforce Marketing Cloud and Veeva CRM. There will also be support for Salesforce Service Cloud and Veeva Vault.

Both companies are fast-growing providers of enterprise-software solutions, something that may seem to put the two tech darlings on a collision course instead of the road to collaboration they've been on for the past decade. However, Veeva's laser focus on a niche clientele -- it specializes in serving pharmaceutical companies and emerging biotechs -- makes it better to work with Veeva than against it. There are naturally a lot of nuances within the drug development and approval process, and Veeva's specialized offerings and dedicated experience make it the platform of choice. 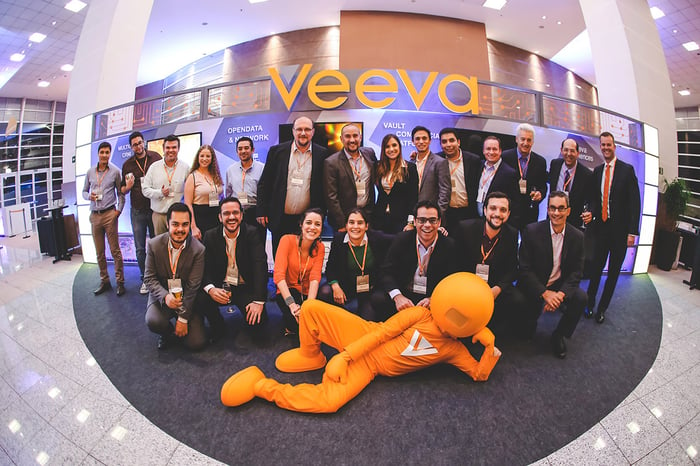 It was a strong fourth quarter for Veeva. Revenue climbed 31% to $150.2 million. Veeva's customer base grew from 400 to 512 over the past year, a number that may not seem very high, but we're talking about a niche market of established and upstart drug companies. Analysts were settling for only $145.9 million on the top line.

Veeva's profit of $0.22 a share for the quarter blew through Wall Street's target of $0.17 a share. It isn't fair to call the healthy beat a surprise. Veeva has landed ahead of where Wall Street pros are parked when it comes to bottom-line forecasts by 15% or better in each and every quarter over the past year.

Veeva also initiated guidance for 2017. It's targeting earnings per share between $0.78 and $0.80 with $655 million to $660 million in revenue. Analysts were holding out for $650.4 million. The $0.80 a share in earnings that Wall Street was forecasting was at the high end of Veeva's range, but we've seen how conservative it is in its public bottom-line projections.

The strong quarter left Morgan Stanley analyst Stan Zlotsky impressed. He thinks there's potential for Veeva outside life sciences, something that's not reflected in its valuation. Zlotsky stuck to his "overweight" rating. His $53 price target suggests healthy upside even from its current level at Friday's all-time high.

There's also the potential of Veeva as a buyout candidate. The perpetually acquisitive Salesforce may decide it's better to own Veeva than to partner with it. However, Veeva's perpetually improving fundamentals make it a likely candidate to continue hitting new highs on its own. The valuation is rich, but Veeva's niche dominance is worthy of a market premium.